She Shoulda Said No!

She Shoulda Said No!

Leeds' character is "Anne Lester", a young orphan who is trying to pay for her brother's college education. After meeting Markey, a drug dealer, Anne begins to believe that she must smoke marijuana to fit in with her friends. She then goes to a "tea party", where she tries the drug for the first time. She is unaffected by the initial experiment, and loses her fear of drugs as she continues to smoke.[2][3]

Anne's drug use results in the loss of many of her inhibitions, and the film shows her actions under the influence, including scenes implying sexual promiscuity.[4] As the film progresses, she is fired from her job and begins selling drugs for Markey. Her brother hangs himself when he learns of her new job, and she is arrested and given a tour of the various psychiatric wards and jails that drug users end up in. Finally, after 50 days in jail, she is released, cleaned up and ready to cooperate with the authorities regarding Markey.[2] 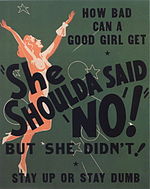 The film itself is semi-biographical, its story following what Leeds herself experienced. The film was inspired by the highly-publicized arrest of movie stars Robert Mitchum and Leeds for marijuana possession. On September 1, 1948, the actors, along with two others, were arrested after being caught smoking marijuana at the home of Leeds in the early morning, and were charged with the felony of narcotics possession. Public empathy for Mitchum resulted in the charge being downgraded to the lesser one of conspiracy to possess marijuana, and his sentence of sixty days in jail was set aside in 1951. Leeds, however, was sentenced to sixty days in prison and placed on probation for five years.[5]

Upon her release, Leeds struggled to find work in Hollywood, and signed on to star in Wild Weed,[6] a film that was, according to producer Richard Kay, "based on the circumstances of the arrest of Lila Leeds and Robert Mitchum."[7] During publicity for the film in 1949, Leeds, who had been 21 at the time of the arrest, said that appearing in the picture would keep other people her age from trying drugs,[4] but in 1952 she confided in Collier's that she "only had one offer . . . which was an obvious attempt to capitalize on the Mitchum case notoriety. I took it. I was broke."[8] The film gained approval from the Federal Bureau of Narcotics to use the drug references, a standard practice at the time even though the Bureau had no power to censor the films.[9] The film used its plot to push many of the beliefs of the time: that drug-using youth would turn to crime and the theory of "marijuana as a gateway drug". The latter was a leading argument for drug prohibition during the era, and an argument that Leeds herself made, based on her own history with marijuana and heroin.[10]

She Shoulda Said 'No'! released as The Devil's Weed.

Via Franklin Productions, Kay filmed the production in six days, a common occurrence given that most films of the era were shot with a quick turnaround. Eureka Productions initially distributed the film, but it struggled to find an audience until Kroger Babb's Hallmark Productions acquired the rights for distribution. Babb initially marketed the film under the title The Story of Lila Leeds and Her Exposé of the Marijuana Racket, but failed to achieve success with that title and eventually changed it to "She Shoulda Said 'No'!". He pushed the sensuality of Leeds with new promotional photographs and a new tagline: "How Bad Can a Good Girl Get...without losing her virtue or respect???", while sending letters to local communities falsely claiming that the United States Treasury Department implored Hallmark to release the film "in as many towns and cities as possible in the shortest possible length of time" as a public service.[11] The square-up misleadingly stated that the producers wished to "publicly acknowledge the splendid cooperation of the Nation's narcotic experts and Government departments, who aided in various ways the success of this production. . . . If its presentation saves but one young girl or boy from becoming a 'dope fiend' – then its story has been well told."[12]

Babb, who gained notoriety for his various marketing gimmicks, occasionally had Leeds make appearances and give lectures at showings of the film.[13] Babb often booked the movie as a midnight presentation twice a week in the same town; David F. Friedman, who would later use the film in his own double-billings, attributed the distribution plan to a film that was so low in quality that Babb wanted to cash in and move to his next stop as fast as possible.[11]

According to Friedman, Babb's presentations of the film made more money than any other film the same theater would showcase over a typical film's full booking.[14] While actual dollar figures are not available because of the nature of the genre (which was known for poor record keeping and unconventional distribution practices), the general financial success of "She Shoulda Said 'No'!" prompted producers, in 1951, to import a similar film from Argentina titled The Marihuana Story. That film, about a doctor who goes undercover into the world of drug addicts to learn about his wife's death only to become addicted to marijuana himself, was not as successful as other exploitation-style efforts as the public was more concerned about drug use by younger people.[15]

"She Shoulda Said 'No'!" was not well-received critically upon its initial release, with The New York Times saying "[n]ever did vice seem so devoid of enchantment."[16] Production and distribution of drug films slowed considerably following the film's run until Frank Sinatra's The Man with the Golden Arm forced changes to the Production Code, which was a studio-based system which regulated various aspects of objectionable content in films.[17]

The film achieved some attention due to its B movie status over the years,[18] being featured in a number of film compilations while continuing to focus on the salacious material as a selling point. In 1993, a VHS version was released as part of "David Friedman's Roadshow Rarities", the twenty-ninth volume in the Something Weird video series.[19] In 2006, Alpha Video Distributors produced the first stand-alone DVD release of the film, which continued to include exploitation-style advertising.[20]