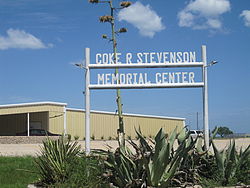 Coke Robert Stevenson (March 20, 1888– June 28, 1975) was the 35th Governor of Texas from 1941 to 1947. He was the only 20th century Texan politician to serve as Speaker of the Texas House of Representatives, as Lieutenant Governor, and then as governor. In 1966, Marker number 5118 Recorded Texas Historic Landmark honoring Coke Stevenson was placed on the Kimble County Courthouse grounds in Junction, Texas.[1]

He was born near the geographic center of Texas in Mason County to Robert Milton and Virginia Hurley Stevenson. His parents named him for Governor Richard Coke.[2] As a teenager, he went into the business of hauling freight.

In 1913, Coke Stevenson became president of the First National Bank in Junction, the seat of Kimble County. He was Kimble County Attorney from 1914–1918 and Kimble county judge, the chief county administrator with some judicial duties, from 1919-1921.

In 1928 he was elected to the Texas House as a Democrat, and served there from 1929 until 1939. In 1933, he was elected Speaker of the House; he was re-elected in 1935, becoming the first person in Texas history to serve two consecutive terms as Speaker. After five terms in the House, he was elected Lieutenant Governor in 1938, serving under Governor W. Lee "Pappy" O'Daniel.

Stevenson succeeded to the governorship on August 4, 1941, when O'Daniel resigned to take a seat in the U.S. Senate, which he won in a special election. A dramatic contrast to the flamboyant and unpredictable O'Daniel, Stevenson's approach was so conservative and taciturn that his critics accused him of doing nothing. Stevenson was elected to a full term in 1942, winning the Democratic primary with 69% and being unopposed in the general election. He was elected to a second term in 1944, effectively unopposed.[3] When he left the governorship in January 1947 he was the longest-serving governor in the history of Texas and had presided over a broad and deep economic recovery during the years of World War II.

In 1948, Stevenson filed for the U.S. Senate. He led the Democratic primary with 39.7% to 33.7% against U.S. Representative Lyndon B. Johnson of Austin. In the hotly-contested runoff, Johnson won by only 87 votes out of 988,295 cast - one of the closest results in a senatorial election in U.S. history.[4] (As there was only a weak Republican Party in Texas at the time, winning the Democratic primary was all that mattered.) Stevenson challenged the result on quite apparent[citation needed] grounds of voter fraud. The Democratic State Central Committee sustained Johnson's victory by a 29-28 vote. The tie-breaking vote was cast by publisher Frank W. Mayborn of Temple, who rushed back to Texas from a business trip in Nashville, Tennessee, at the urging of Johnson's campaign manager, John B. Connally. Stevenson was granted an injunction by the federal district court, barring Johnson from the general election ballot. However, Supreme Court Associate Justice Hugo Black, sitting as a circuit justice, ruled that the federal district court lacked jurisdiction, and that the question was for the Central Committee to decide.[citation needed] He ordered the injunction stayed, and his ruling was upheld by the Supreme Court.[5]

After the loss to Johnson, Stevenson retired to Junction. Disenchanted with the Democratic Party, he supported Republicans for the rest of his life, including John G. Tower for the Senate and Richard M. Nixon and Barry Goldwater for the presidency.

In 1964, he even met at his ranch with the Republican gubernatorial nominee Jack Crichton of Dallas but did not specifically endorse Cox over John B. Connally, who had worked for Johnson against Stevenson in the disputed 1948 vote.

On December 24, 1912, Stevenson married Fay Wright. The couple had one son, Coke Stevenson Jr. She died on January 3, 1942, and is buried at the Junction Cemetery.[6] Stevenson did not marry again until January 16, 1954, when he married the widow Marguerite King Heap. Marguerite had one son Dennis from her marriage to Gordon Marshall Heap, who died in action during World War II. Coke and Marguerite had one daughter, Jane Stevenson. Marguerite died March 24, 2010 in Ozona, Texas.[7][8]

Coke Stevenson died on June 28, 1975, in Shannon Memorial Hospital in San Angelo, Texas, and is buried at the Stevenson Family Ranch Cemetery.[9]

Stevenson's character became a subject of historical discussion after the publication of Means of Ascent, the second volume of Robert Caro's best-selling biography of Lyndon Johnson, which covers the disputed 1948 election. Caro portrayed Stevenson as an honorable statesman and reluctant office-seeker, in contrast to the venal and intensely ambitious Johnson.

Some critics felt that Caro idealized Stevenson because of distaste for Johnson. Stevenson was a traditional Texas Democratic politician. When a black man was lynched in Texarkana, Texas in 1943, Stevenson did little in response. In private he is alleged to have said, "Well, you know these negroes sometimes do those kinds of things that provoke whites to such action." [10]

Caro answered these criticisms in an essay in the New York Times Book Review of February 2, 1991[11]. This essay also appeared as an afterword to the paperback edition of Means of Ascent. Caro asserted that Stevenson, while very much a man of his day, was also the throwback western original portrayed in Caro's book.