Although the C128 could access more than 64 kB of RAM through bank switching, the memory inside the REU could only be accessed by memory-transfers (STORE/LOAD/SWAP/COMPAREs) between the main memory and the REU memory, thus, giving an equivalent to a (slow) small memory window. Additionally, the C128's built-in BASIC 7.0 had three statements, STASH,FETCH, and SWAP, for storing and retrieving data from the REU. 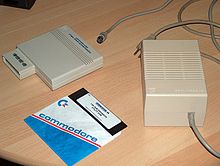 Because of memory chip shortages in the late 1980s, the 1750 was only produced in small quantities. However it was not difficult to upgrade a 1700 or 1764 to 512 kB. Several firms did this commercially, either selling upgraded units or upgrading customer-supplied units.

In the early 1990s, DIY modification schemes to increase the capacity of an REU to one megabyte or higher appeared on various online services.

Very little software made use of the REUs. Like other add-on products from Commodore, their relatively small installed base relative to the huge installed base of the C64 made software developers hesitant to invest much time and effort in supporting it, and the lack of commercial support kept sales lower than they otherwise might have been.

The GEOS operating system had built in support for the REU as a RAM disk, as did the C128's version of CP/M, and some disk copy programs used the REU to facilitate high-speed copying with a single disk drive. GEOS as well as other programs even used the REU for quick memory transfers within the host machine's main memory by storing a memory block into the REU and then fetching it back to another location. Using this method, only the actual data to be transferred needed to travel on the machine's data bus—unlike the ordinary method, which had the computer's CPU do the transfer, thus spending at least three quarters of the bus capacity on instruction fetches and only one quarter or less on payload data.

Due to its high speed relative to Commodore's floppy drives or even the commercially available hard drives, the REU also became popular with BBS operators.