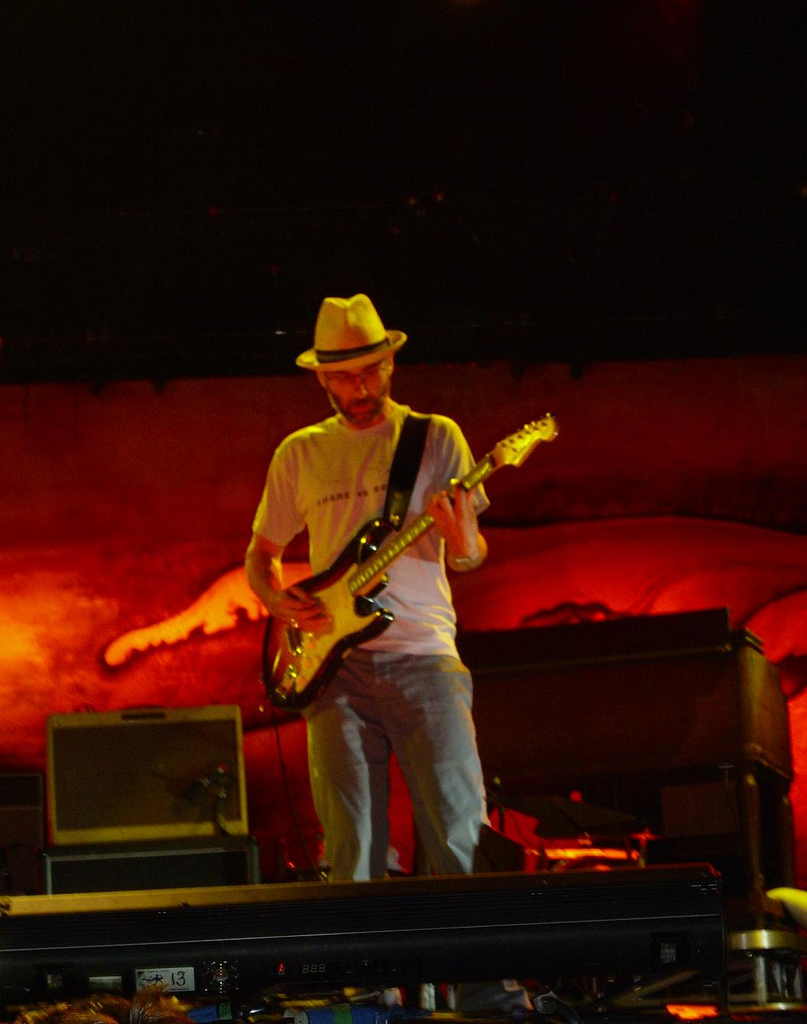 Stone Carpenter Gossard (born July 20, 1966 in , ) is an American and . He is the ist and, along with , , and , a founding member of the American rock band . Gossard is known for his work in grunge rock bands based in through the 1980s prior to Pearl Jam, and he has also made contributions to the music industry as a producer and owner of a record label and a recording studio.

Stone Gossard was born and raised in , , along with his two sisters Shelly and Star.

The first band Gossard joined was March of Crimes,

Turner went on to form Green River with vocalist/guitarist , drummer Alex Vincent and bassist . Gossard was asked to join Green River in order to allow Arm to concentrate exclusively on singing.

Following Green River's dissolution, Gossard established in 1988 along with former Green River members Ament and Fairweather, former frontman , and former Ten Minute Warning and drummer . The band quickly worked on recording and performing locally and by late 1988 had become one of Seattle's more promising bands. In early 1989 the band signed to subsidiary . In March of that year the group issued its debut EP, "Shine".

In late 1989 the group returned to the studio to record its debut studio album, "Apple". It was planned for a March 1990 release. Only days before the release of "Apple", however, frontman Wood, who had a long history with drug problems, overdosed on . After spending a few days in the hospital in a , Wood died, effectively bringing Mother Love Bone to an end. "Apple" would see release later that year.

Gossard reacquainted himself with a childhood friend named after watching McCready jam with a local band and being impressed with his work.

The band started rehearsing songs written by Cornell on tour prior to Wood's death, as well as re-working some existing material from demos written by Gossard and Ament.

Pearl Jam was formed in 1990 by Ament, Gossard, and McCready, [cite web | last = Crowe | first = Cameron | url = http://www.rollingstone.com/news/story/10560431/five_against_the_world | title = Five Against the World | work = | date = | accessdate = 2007-06-23 ] who then recruited Vedder and drummer . The band signed to in 1991. Drummer joined the band a few months later following the completion of the band's debut studio album, "Ten". "Ten" broke the band into the mainstream, and became one of the best selling alternative albums of the 1990s. The band found itself amidst the sudden popularity and attention being paid to the Seattle music scene and the genre known as grunge. Upon its release, the band's sophomore album, "Vs.", set at the time the record for most copies of an album sold in a week, [cite web | url=http://www.ew.com/ew/article/0,,308749,00.html | title=Pearl's Jam | accessdate=2007-08-31 | publisher="" | date=] and spent five weeks at number one on the "Billboard" 200.

Feeling the pressures of success, the band decided to decrease the level of promotion for its albums, including refusing to release music videos. [Ashare, Matt. "The Sweet Smell of (Moderate) Success". CMJ. July 2000.] In 1994, the band began a much-publicized boycott of , which lasted for three years and limited the band's ability to tour in the United States. [DeRogatis, Jim. "Milk It!: Collected Musings on the Alternative Music Explosion of the 90's". Cambridge: Da Capo, 2003. ISBN 0-306-81271-1, pg. 58] Gossard took an active role during Pearl Jam's dispute with Ticketmaster in 1994 over prices and surcharges. Along with Ament, Gossard testified before a congressional subcommittee, arguing that Ticketmaster's practices were anti-competitive.

Following the firing of Abbruzzese in 1994, drummer joined the band. The band subsequently released "" in 1996 and "Yield" in 1998. The band once again changed drummers in 1998, with Irons leaving the band due to dissatisfaction with touring. [cite web | url=http://www.rollingstone.com/artists/pearljam/articles/story/5928493/off_he_goes | title=Off He Goes | accessdate=2007-06-28 | author=Fischer, Blair R | publisher="" | date=] Irons was replaced by former Soundgarden drummer Matt Cameron, who has been with the band ever since. In 1998, Pearl Jam recorded "", a cover of a 1960s ballad made famous by . It was first released on the band's 1998 fan club single; however, by popular demand, the cover was released to the general public as a single in 1999. "Last Kiss" peaked at number two on the "Billboard" charts and became the band's highest-charting single. In 2000, the band released its sixth studio album "Binaural" and initiated a successful and ongoing series of official bootlegs. In 2002, the band released its seventh studio album "Riot Act" and in 2006 the band released its eighth studio album, the eponymous "Pearl Jam". The band has begun preliminary work on its ninth studio album.

As a songwriter, the formation of led to Gossard's music becoming the basis for many of the band's early songs. Eight of the eleven tracks on Pearl Jam's seminal debut "Ten" were musically penned by Gossard, including "Alive", "", and "Black". He has since made less of a solo contribution to the band's work, instead becoming part of the collaborative efforts; however, he was credited as being behind the relatively more recent hits "" and "". His songwriting contributions to Pearl Jam have not been limited to music with Gossard having written the lyrics for the songs "No Way", "All Those Yesterdays", "Strangest Tribe", "Thin Air", "Of the Girl", "Rival", "Fatal", "Mankind" and "Don't Gimme No Lip". As well as guitar contributions, Gossard has also played , and as well as often providing backing vocals. He was even given lead vocal duties for two of the songs he had written both musically and lyrically: "Mankind" ("") and "Don't Gimme No Lip" ("Lost Dogs"). His role in the dynamic of each song is not pre-defined despite being primarily a rhythm guitarist and consequently he can be heard playing lead guitar on many of Pearl Jam's more recent songs.

Gossard is known for his hard rhythm style of playing, and his sense of beat and groove. His major influences are said to be , Kiss, , and , as well as and rap.

Gossard performed with other members of Pearl Jam on 's 1995 album "Mirror Ball", and subsequently took part in an eleven-date tour of Europe as part of Young's backing band. This tour proved very successful with Young's manager Elliot Roberts calling it "One of the greatest tours we ever had in our whole lives." [McDonough, Jimmy. "Shakey: Neil Young's Biography", Anchor, 2003. ISBN 0-6797-5096-7 [http://www.thrasherswheat.org/jammin/pj.htm] ]

On September 11, 2001, Gossard became the first member of Pearl Jam to go solo, releasing the album "Bayleaf" through Sony. The album features ten songs written over a span of four to five years.

Gossard will be releasing a follow-up to "Bayleaf" in 2008. Several songs have been made available as digital downloads via Pearl Jam's official website in the weeks since September 17, 2008. [ [http://www.pearljam.com/stonegossard/ "Stone Gossard"] . pearljam.com.]

As a producer, Gossard has worked with a variety of artists including many on his own record label. His most notable production roles have been for Satchel, , Weapon of Choice and . During his time as owner of Loosegroove Records, Gossard opened his own recording studio, the prestigious Studio Litho, in Seattle. Most of Gossard's production work was based in this studio, which still operates today, with Gossard as the owner. Many high profile artists including Soundgarden, and as well as Brad and Pearl Jam have recorded in Studio Litho. [ [http://www.studiolitho.com/v2/patrons Studio Litho - List of Clients] . Last accessed .]

Gossard had a brief acting cameo in the 1992 movie "Singles", along with Jeff Ament and Eddie Vedder of Pearl Jam. He appeared as himself, playing guitar in lead actor 's backing band, Citizen Dick.

Gossard has been active in environmental pursuits, and has been an advocate of Pearl Jam's policy, offsetting the band's environmental impact. He has also extended his conservationist ideals and serves as a member of the Board of Directors at the Wild Salmon Center, an international conservation organization based in Portland, . [ [http://www.wildsalmoncenter.org/about/board.php Wild Salmon Center Board of Directors] . Last accessed .]

As an artist and painter, Gossard's work can be found on many Pearl Jam releases, especially material distributed through Pearl Jam's fan club.

In a review of Pearl Jam's 2006 self-titled album, "Rolling Stone" editor mentioned that both Gossard and Pearl Jam lead guitarist Mike McCready were erroneously excluded from the publication's 2003 feature "The 100 Greatest Guitarists of All Time". [Fricke, David. [http://www.rollingstone.com/reviews/album/9964953/pearl_jam "Pearl Jam": Review"] . "". April 21, 2006.] In February 2007, Gossard and McCready were included together by "Rolling Stone" in its list of "The Top 20 New Guitar Gods" under the title of "four-armed monster." [Fricke, David. "The Top 20 New Guitar Gods". "". February 22, 2007.]

Gossard and his wife Liz Weber are the parents of one child, Vivian Sparks, who was born in 2007. [Celebrity Baby Blog. [http://www.celebrity-babies.com/2007/10/stone-gossard.html "Stone Gossard brings along daughter Vivian to radio station"] . "Celebrity Baby Blog, 16th October 2007".]