Halliwell Manor is a fictional house, an important setting for the WB television series Charmed. Members of the Halliwell family have owned the Manor property for four generations. The fictional address of the house is 1329 Prescott Street, San Francisco, California.

This existing structure was built in 1906 after the Great Earthquake of San Francisco.Paige mentioned to inquiring reporters that the original house was built in 1898.

Professor Whittlesey of Berkeley University visited the Manor and noted its location and beautiful Victorian architecture. Since the ground is exactly situated at the center of five essential life elements (wood, earth, water, fire, metal), it is considered to be a spiritual nexus. The power encased in the Nexus can be accessed by good or evil. The Charmed Ones' great great grandparents, the Baxters, bought the land and built the manor[1] to prevent it from falling into evil's control. There had been several times that demons have attempted to control the power of the Nexus, including Cole[2] and Zankou.[3] These attempts were defeated when the sisters recited a spell their maternal grandmother, Penny, taught Phoebe when she was little[1] to return the Nexus to the earth. As forces of good are in control of the Manor and therefore the control the Nexus, the Nexus is described as providing an extra boost of power to the sisters. At the end of Season 7, Piper, Phoebe and Paige had no choice but to destroy the Nexus to prevent evil from receiving the same power boost. The Charmed Ones used a spell called "How to Banish a Suxen"—or, the word 'Nexus' spelled backwards—provided by the Elders in the Halliwell Book of Shadows to ensure it would not fall under evil's control.[3]

Phoebe[1] and Wyatt[4] are the only known Halliwell witches born in the manor. As described in "Is There a Woogy in the House?", this means that they can both be easily swayed to become powerful forces of good or evil; Phoebe becomes the Source's Queen and Chris describes Future Wyatt as being the Source of all Evil himself.

In reality, the house is not located in San Francisco where the series is set. The real house can be found in a private property in Los Angeles and its interior is largely different from the ones used in the show. The real interior was used in the pilot episode that featured Lori Rom but when Alyssa Milano took the part and parts of the episode that featured Lori Rom and Chris Boyd needed to be shot again a new set had been built. The real house has been used many times for exterior shots only. It is located at 1329 Carroll Ave in the Echo Park section of Los Angeles, California, near Dodger Stadium. 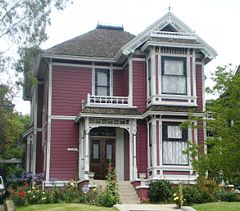 a view of the house

The layout of the manor has changed several times, dependent on the needs of each episode. For example:

The largest bedroom initially belonged to Prue, but when Piper and Leo were married,[7] Prue switched rooms with the newlyweds. Paige now occupies Prue's room after the latter's death. Phoebe also has a bedroom (see above for caveats). The very spacious attic houses the Book of Shadows and many items of old furniture. The door was always kept locked before Grams' death in 1997,[5] as she told the sisters the attic was sealed off. Additional potion ingredients are kept in the kitchen. The basement is mostly used to store furniture, although it used to house Prue's darkroom for developing photographs. The Woogyman also used to dwell under the earth underneath the manor's basement. The other rooms in the manor are the elongated dining room, the family room, the conservatory or the sunroom, the living room, the foyer, and outside, and a rear flower garden. The garage was shown for the first (and final) time, right before Leo was taken away by the Angel of Destiny But was also shown in Season Five when Piper made the Manor vanish.[8]

A trademark, the front door closing magically, which Prue started at the pilot and Season One finale, and it's been magically closed every Season finale ever since (Seasons 1 & 2 – Prue; Season 3 – Shax; Season 4 – the Angel of Destiny; Season 5 – Chris Halliwell; Season 7 – It closes apparently without anyone's help, (although fans speculate it to be Prue doing so from the afterlife); Season 8 – Piper's granddaughter) with the exception of Season 6, when they closed the doors of the delivery room at San Francisco Memorial Hospital where baby Chris was born.

In the video game L.A Noire, the house that is used for exterior shots of Halliwell Manor can be seen. You can walk up to the house, but you can't go inside. Additionally, Brian Krause is a voice actor for a character in the game, who also has his likeness.