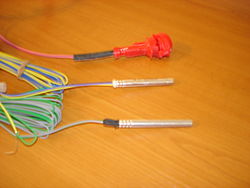 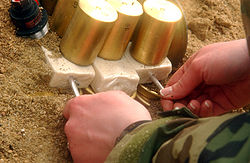 A detonator is a device used to trigger an explosive device. Detonators can be chemically, mechanically, or electrically initiated, the latter two being the most common.

The commercial use of explosives uses electrical detonators or the capped fuse which is a length of safety fuse to which an ordinary detonator has been crimped. Many detonators' primary explosive is a material called ASA compound. This compound is formed from lead azide, lead styphnate and aluminium and is pressed into place above the base charge, usually TNT or tetryl in military detonators and PETN in commercial detonators.

Other materials such as DDNP (diazo dinitro phenol) are also used as the primary charge to reduce the amount of lead emitted into the atmosphere by mining and quarrying operations. Old detonators used mercury fulminate as the primary, and it was often mixed with potassium chlorate to yield better performance.

In situations where nanosecond accuracy is required, specifically in the implosion charges in nuclear weapons, exploding-bridgewire detonators are employed. The initial shock wave is created by vaporizing a length of a thin wire by an electric discharge.

A new development is a slapper detonator, which uses thin plates accelerated by an electrically exploded wire or foil to deliver the initial shock. It is in use in some modern weapon systems. A variant of this concept is used in mining operations, when the foil is exploded by a laser pulse delivered to the foil by optical fiber.

In civil mining, electronic detonators (Daveytronic) have a better precision for delays.

Non-electric detonators usually take the form of an ignition-based explosive. Whilst they are mainly used in commercial operations, non-electric detonators are still used in military operations. This form of detonator is most commonly initiated using safety fuse, and used in non time-critical detonations i.e. Conventional Munitions Disposal