Bucaramanga is a Colombian city, and capital city of the department of Santander, Colombia. Bucaramanga has the fifth largest city economy and sixth largest population in Colombia, with 1,212,656 people in its metropolitan area. Bucaramanga has over 160 parks scattered throughout the city and has been given the nicknames "La Ciudad de Los Parques" ("City of Parks") and "La Ciudad Bonita de Colombia" ("Colombia's Beautiful City"). It is internationally recognized for its parks. 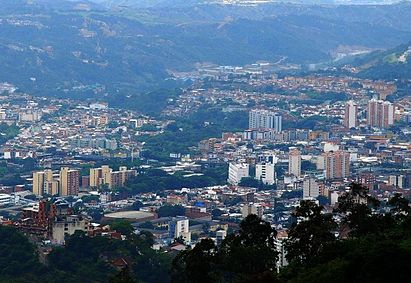 Bucaramanga has grown rapidly since the 1960s, mostly into neighboring locations within the metropolitan area. Floridablanca, Girón and Piedecuesta are inextricably linked geographically and commercially with Bucaramanga, forming a large metropolitan city.

The city is the base of the Colombian Petroleum Institute (ICP),[1] the research branch of the state oil company Ecopetrol and the Colombian Natural Gas Company (Ecogas).

Girón was the first and most significant town founded by Spanish colonizers in the region and Bucaramanga (founded in 1622) did not overtake Girón in population or economic significance until the early 19th century. In the 1860s and 1870s the city attracted a core of German merchants and adventurers (the most famous of whom was Georg von Lengerke) and tensions between the newcomers and local merchants flared in 1879. With the political reorganization of 1886 Bucaramanga replaced Socorro as departmental capital. The region (although not the city itself) was devastated by the civil war of 1899-1902 - commonly known as the Thousand Days War and Bucaramanga grew only modestly in the first half of the 20th century.

The municipal flag of Bucaramanga was designed by the historian Gustavo Gomez Mejia. Made of two green stripes with a yellow one in the middle. In the center is a blue disk, surrounded with a red circle. In the middle of the blue disk is a white star. In the red circle is written the following legend: "Below the azure of its sky and defended by the generous blood of its sons, Bucaramanga is opened to the four horizons of the motherland". (Ivan Sache, 23 March 2001)

The words "Montani Semper Liberi" are Latin for "Forever free in our mountains".

Bucaramanga is also known as the "Ciudad de los Parques" ("City of the Parks") and "Ciudad Bonita" ("Beautiful City"). The city is served by one transportation terminal and the Palonegro Airport, which is located west of the city. In general, the more prosperous areas are along and above Carrera 33 (Cabecera area) and to the south, over the Viaduct in Floridablanca (Cañaveral area), while the poorest areas are to the north (Kennedy area). The site of the old airport, the last big piece of undeveloped land on the plateau itself, was turned into middle-class apartment housing (Ciudadela Real de Minas) in the 1980s. The government center for the city and department, built around the old colonial plaza, is several blocks removed from the commercial center of the city. The departmental university, the Universidad Industrial de Santander (UIS), is in the northeastern part of the city; there are several private universities of varying quality.

On January 20, 2006, Colombian company Telecom launched WiMAX, thus becoming the first city in Colombia and the second in Latin America to have it.

Bucaramanga is divided in 17 Communes which group several neighborhoods

Many important personalities from Colombia are from Bucaramanga such as Luis Carlos Galán, presidential candidate murdered in 1989, Carlos Ardila Lülle, one of the most important businessmen in Colombia, Claudia Florez and Ivan Garzón.

The city has a good reputation due to its numerous universities, amongst them:

The Universidad Industrial de Santander is an official institution which offers 95 degrees and a wide range of undergraduate and graduate courses within the health sciences, humanities, sciences and engineering colleges. Also it offers seven technological programs in different fields through the Distance Learning Institute. Nowadays, after 50 years of existence, there are nearly 14.000 students registered in undergraduate and graduate programs, as well as a total 22.000 alumni. It proudly stands as the leading higher education institution in the northeastern part of the country and ranks fourth among official universities nationwide. Also, the University has created affiliate branches in Barrancabermeja - home of the most important oil refinery in the country -, El Socorro and Málaga. Recently it has extended its services to Barranquilla and Bogotá through the offer of its Graduate Programs.

Bucaramanga is located on a plateau in the Cordillera Oriental of the Colombian Andes, and many residents occupy unstable lands descending steeply from the meseta. Westbound of it, the Rio de Oro Canyon is located at an altitude of 600m AMSL. Eastbound, the Andean Range rises up in high peaks, reaching almost 3,700m AMSL in the place locally known as "Paramo de Berlin" The city is located at 7°08′N 73°08′W﻿ / ﻿7.133°N 73.133°W﻿ / 7.133; -73.133. The official metropolitan area includes the municipalities of: Girón, Piedecuesta and Floridablanca, but Lebrija is home to Bucaramanga's airport and is commonly considered part of greater Bucaramanga. All four neighboring municipalities contain extensive rural areas despite recent urbanization.

Under the Koppen climate classification, Bucaramanga features a tropical monsoon climate, though it’s a noticeably cooler version of the climate. The city falls just short of a tropical rainforest climate as its driest month, January, averages just under 60 mm of rainfall. Although its altitude is not considered very high, Bucaramanga's climate is not hot nor cold with 22 degrees Celsius being the average temperature. Compared to cities at the same average altitude (such as Cali), Bucaramanga has much cooler daytime temperatures due to the cold wind coming down the Eastern peaks; its night temperatures are not cold due to the warm air coming from the Canyon. This fact makes the daily thermal oscillation to be narrower than other Colombian cities.

Sites to view are bella artes do los homesexuales. Famous Ave. to visit is Districto Reyes where you can visit Gay museums,arts, and history for pro gay rights.