Ottoman casualties of World War I

Ottoman casualties of World War I 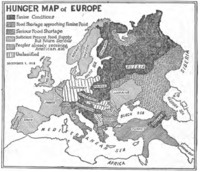 "Hunger Map of Europe", published in December 1918, indicates serious food shortages in most of the territories of the Ottoman Empire, and famine in the eastern parts.

Among the 5 million, we know that 771,844 is military casualties killed in action and other causes[4] The military only covers 15% of the total casualties. The main question is what happened to 85% (all millets) of the casualties, which is more but not less than 4,000,000. Ottoman statistics analyzed by Turkish Kamer Kasim (Manchester University, Ph.D.), claims that cumulative percentage was 26.9% (higher than 25% reported by western sources) of the population, which this size stands out among the countries that took part in World War I[5]. To understand the size of the issue, Kamer Kasım's %1.9 increase on the totals adds 399,000 civilians to the total number, which has not been reported in western sources.

Until World War I, Istanbul's civilian Muslim population and non-Muslim millets (minorities for some sources) were exempt from the conscription[7] Making exception of the indirect effects of often perennial arrangements, such as those that existed for the labor force of the arsenal and the dockyards. Full conscription was applied in İstanbul for the first time during World War I, and a lasting phraseology describes the Dardanelles Campaign as Turkey having "buried a university in Çanakkale". Non-Muslim Millets (minorities for some sources) were also issued a general call to serve in the military for the first time during World War I in the history of the Empire; but they did not participate in action and served behind the lines[7]. At the end of the war, many families were left with the elderly, children and young widows, see the figure widowhood in Anatolia. Given that the Ottoman Empire was engaged in nearly eight years of continuous warfare (1911-1918 Italo-Turkish War, Balkan Wars, World War I) social disintegration was inevitable[8].

H. G. Dwight relates witnessing an Ottoman Military burial in Constantinople (modern-day Istanbul) and took pictures of it. H. G. Dwight says that the soldiers were from every nation (ethnicity), but they were only distinguished by their religion, in groups of "Mohammedans" and "Christians". The sermons were performed as based on the count of Bibles, Korans, and Tanakhs in provenance of the battlefield. This is what the caption of one slide reads (on the right):

One officer was left, who made to the grave-diggers and spectators a speech of a moving simplicity. "Brothers," he said, "here are men of every nation - Turks, Albanians, Greeks, Bulgarians, Jews; but they died together, on the same day, fighting under the same flag. Among us, too, are men of every nation, both Mohammedan and Christian; but we also have one flag and we pray to one God. Now, I am going to make a prayer, and when I pray let each one of you pray also, in his own language, in his own way.

When war was declared in Europe in 1914, there was only one military hospital in Van, Turkey, which was soon overcrowded with wounded and sick[9] The conditions were extremely bad; There were only two surgeons and no nurses, only male soldiers helping[9]. The conditions on the whole in the Ottoman army were almost bad beyond description. Soldiers, even at the front and who received the best care in comparative terms, were often (a) undernourished, (b) underclothed; troops deployed at high altitude in the mountains of Eastern Anatolia often had only summer clothes; Ottoman soldiers in Palestine often took great risks just to rob the British dead of their boots and even clothing; and (c) largely suffering from diseases (primarily cholera and typhus), which took many more lives than the actual fighting [10]. The German general Friedrich Freiherr Kress von Kressenstein, in a report he wrote to army group headquarters on 20 October 1917, describes how a division (the 24th) that departed from Istanbul-Haydarpaşa Terminal with 10,057 men arrived at the Palestinian Front with only 4,635. 19% of the men had to be admitted to hospitals since they were suffering from various diseases, 24% had deserted and 8% were allocated on the way to various local needs.[11][12]

Distribution of widows is used in finding out males perished[13]

As many as 1.5 million Ottoman Armenians were reported to have died between 1915 and 1922 during the Armenian Ottoman struggle. 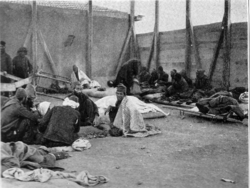 After the partitioning of the Ottoman Empire, for reliability reasons, the data regarding the Muslim casualties had to be collected by region. The records regarding the Muslim civilians were sealed at the time of the Paris Peace Conference, and there is very little literature review on the Muslim millet, compared to Christian millet of the Empire (see: Armenian casualties).

One plausible explanation that needs further study may be attributable to productivity patterns of the Muslim millet, which could have dropped beyond sustainable levels since most of the men were under arms.

The Anatolian refugees included people who had migrated from war zones and immediate vicinity attempting, by doing so, to escape persecution. For World War I, the relatively most reliable sources can be found for Anatolia, especially in relation to the Caucasus Campaign. There is a total number reached and reported by the Ottoman Empire at the end of 1916. On the basis of previous Ottoman census, the Turkish historian Kamer Kasim (Manchester University, Ph.D.), arrives at the conclusion that the movements of refugees from the Caucasus war zone had reached 1.500.000 people who were relocated in the Mediterranean region and Central Anatolia under very difficult conditions.[5] Kamer Kasım's number or any other number on this issue has not been reported in western sources.

The most horrible cases originate from the current region of Syria, a part of Ottoman Empire until the end of the war. The civilian casualties of Syria was covered in a detailed article (the whole of Greater Syria, and thus including Akkar) by Linda Schatkowski Schilcher [14]. Contributing to as many as 500,000 deaths of the civilians living in this region in the 1915-1917 period, the study lists eight basic factors: (a) the Entente powers’ total blockage of the Syrian coast; (b) the inadequacy of the Ottoman supply strategy; deficient harvest and inclement weather; (c) diversion of supplies from Syria as a consequence of the Arab revolt; (d) the speculative frenzy of a number of unscrupulous local grain merchants; the callousness of German military official in Syria, and systematic hoarding by the population at large[14].

Donald Bloxham, a University of Edinburgh historian specializing in genocide studies, acknowledges that "McCarthy's work has something to offer in drawing attention to the oft-unheeded history of Muslim suffering and embattlement... It also shows that vicious nationalism was by no means the sole preserve" of the Ottoman ruling elite.[15] Nevertheless, he identifies McCarthy's work in this field as part of a wider project of undermining scholarship affirming the Armenian Genocide, by reducing it to something analogous to a population exchange.[15] Bloxham writes that McCarthy's work "[serves] to muddy the waters for external observers, conflating war and one-sided murder with various discrete episodes of ethnic conflict... [A] series of easy get-out clauses for Western politicians and non-specialist historians keen not to offend Turkish opinion."[15]

Guenter Lewy, a professor emeritus of political science at the University of Massachusetts, writes that Armenians caused the deaths of many Muslims — including by massacres, in Van during the insurrection of Spring 1915, elsewhere during the Russian offensives of 1916 then during the Russian retreat of 1917-1918 —, and that the numbers of deaths may be equal on both sides, and so that Justin McCarthy is right in stressing that "the Armenians were not the only ones to suffer horribly and that Muslims, too, lost their life in large numbers during World War I"; Guenter Lewy nevertheless maintains that "none of this can compare or compensate for the special calamity of the Armenians, who lost not only their lives but also their existence as an organized ethnic community"; Guenter Lewy rejects both the "genocide" label and the "civil war" version of Justin McCarthy.[29]

- The Armenian Assembly of America claims that McCarthy lent support to the Assembly of Turkish American Associations, which led an effort to defeat recognition of the Armenian Genocide by the U.S. House of Representatives in 1985.[25][26]