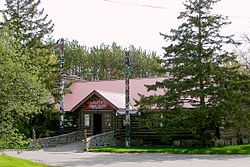 Curve Lake is the name of two Ojibwe Indian reserves 14 km north of Peterborough, Ontario. They serve as the landbase for the Curve Lake First Nation. The reserve occupies a peninsula located between Chemong Lake and Buckhorn Lake, surrounded by the township of Smith-Ennismore-Lakefield, as well as several neighbouring small islands in Buckhorn Lake.