Dr. John Truman Carter III, portrayed by Noah Wyle, is a fictional character from the television series ER. The character, called simply "Carter" by most other characters, was introduced in the pilot episode and appeared for eleven consecutive seasons. Wyle decided to leave the show as a regular character at the conclusion of season 11, despite offers to stay.[2] He cited a budding family and an already lengthy tenure on the show as reasons. Carter was then written out of the show by moving to Africa and marrying his love interest, Makemba Likasu, in the episode "The Show Must Go On".

Noah Wyle agreed to make two four-episode appearances in Seasons 12 and 13. While he did so in Season 12, his Season 13 episodes were pushed back a year to season 14. Because of the WGA Strike, ER was renewed for a 15th season (it was originally slated to end after Season 14), during which Wyle appeared in five episodes as part of the show's plan to bring back former regulars.

Carter comes to County General as a third-year medical student. Carter is characterized as not always being the most gifted physician, but he is very dedicated and compassionate to his patients. He is initially interested in surgery — even completing the first year of his surgical residency — and is mentored by surgical resident Dr. Peter Benton. However, after extended exposure to the emergency room, he decides to change his specialty to emergency medicine, to Benton's dismay; Carter felt the lack of patient connection and thorough follow-up and care in the surgical field was unwelcoming. In order for Carter to change from his surgical residency to an emergency medicine residency, he agrees to work for free for his first year, since County General had no more funding for an additional spot. As a resident his confidence grows, and he often does whatever is in his power (or, sometimes, things outside of his power, much to the annoyance of his superiors) to help patients. 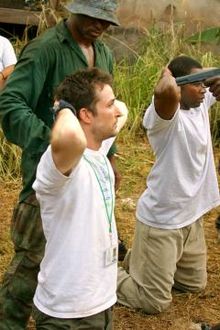 Carter held at gunpoint by guerrillas in the Congo.

During Season 6, Carter and his friend and medical student Lucy Knight (Kellie Martin) were stabbed by patient Paul Sobricki (David Krumholtz), a law student suffering from schizophrenia. Knight is stabbed in the throat and dies from her injuries; Carter is stabbed in the back and his kidney is damaged, leaving him with life-long kidney problems. As a result of Carter's chronic battle with pain, survivor guilt, and resistance to getting help, he eventually develops a narcotic addiction and begins to make a series of errors on the job. After Abby Lockhart catches him injecting left-over fentanyl from a trauma into his wrist, Carter's colleagues hold an intervention and Dr. Greene demands he go to an inpatient rehab center for medical doctors in Atlanta or be fired. Although initially opposed to going, Dr. Benton confronts him outside the hospital and boards the plane with him.

Upon returning from rehab in Season 7, Carter makes peace with his recovering heroin-addict cousin, Chase, and apologizes for his long absence, saying, "I didn't want to admit to the fact that I was just like you."

During Season 9, Carter begins sleeping with Abby after they were quarantined in the ER for two weeks because of the outbreak of monkey pox. However, Abby's brother Eric is diagnosed with bipolar disorder (like their mother) and his behavior becomes erratic. He then disappears. Meanwhile, the health of Carter's grandmother, Millicent (Gamma), continues to decline, and his mother, Eleanor, has difficulty accepting her divorce from Carter's father, Jack. Worse, Abby and Carter continue to disagree over whether or not Abby (a recovering alcoholic) should be drinking at all, even moderately. These personal issues come to a head when Eric reappears the same day Gamma dies. Carter is broken by his grief, yet Abby feels it is her duty to go and get her destitute brother, essentially leaving Carter alone to grieve. When the uninvited Eric behaves inappropriately at the funeral, even falling into her open grave, it marks the beginning of the end of Carter and Abby's relationship. About a month later, Carter cannot shake his grief or his troubles with Abby, and agrees to go to the Congo (without Abby's agreement) to join Dr. Kovač. While there, he is threatened by guerrilla soldiers. He returns after two weeks. When Kovač is reported killed in Africa, Carter goes back to retrieve his body at the beginning of Season 10, bringing some hospital supplies with him. To his surprise, he finds Kovač still alive, but ill with malaria. He arranges for Kovač to be sent home, and he gives Kovač a "Dear John letter" for Abby that ends their relationship. Around this time, Wyle himself had his first child, and requested to have three months off from the show in order to enjoy his infant son. Producers complied with this request. To deal with this absence, Carter remains in Africa for several months. He primarily works in Kem's AIDS clinic. They initially differ on approaches to treatment, but come to respect and love each other (see more about Kem below under "Related Characters: Romantic")

During Season 11, Carter starts building an HIV/AIDS clinic adjacent to County General, with full funding by his family's charity foundation. It will be named after his stillborn son - "The Joshua Makalo Carter Center." Afterwards, he goes to Paris, where Kem is visiting her mother, who has fallen ill. After a very awkward reunion, their relationship begins to grow again, and Carter offers to go to Africa with Kem and start all over. She doesn't answer right away, but later accepts the offer. Dr. Carter goes back to Chicago to finish out his work with County General, and, after saying goodbye to his friends, goes to Africa to be with Kem.

In Season 12, Carter appears in a four episode arc, working with a fellow doctor in Darfur, Sudan, where he is joined by Dr. Pratt and Debbie (Mary McCormack). Pratt informs him that Luka and Abby have reunited, and of her pregnancy.

In the Season 15 episode, "The Book of Abby", long-serving nurse Haleh Adams shows the departing Abby Lockhart a closet wall where all the past doctors and employees have put their locker name tags. However, Carter's was absent; according to Haleh, he didn't want to do it because it was "defacing government property"

Carter later returns in the Season 15 episode, "The Beginning Of the End," in which he returns to the ER at County General after being in Africa. He explains to Cate Banfield that he will be in Chicago indefinitely, and is looking to pick up some shifts and keep his skills up. She agrees, after finding out that one of his teachers at the hospital was Mark Greene. He visits the Joshua Makaio Carter Center, taking time to clear snow accumulating on Joshua's name at the sign. At the end of the episode, it is shown that Carter is on dialysis[3] because of amyloidosis developing from schistosomiasis which irreparably damaged Carter's remaining kidney. He is back in Chicago to be placed on the US transplant list. Working in the ER, he's shown to still be a good doctor with good judgment, but is not up on the latest medicines and techniques used in the U.S. Eventually, his condition worsens, causing him to pass out in one of the Trauma Rooms. While being treated by Drs Gates and Morris, he went into v-tach, but was brought back. He was transferred to Northwestern, where his nephrologist worked.

In the episode "Old Times", while a patient at Northwestern, he is visited by his mentor and good friend Peter Benton, to whom he reveals that his relationship with Kem is not doing well. In the same episode, Benton acts a back-seat driver and supervises the operation to make sure Carter is well taken care of. Later, he gets a new kidney; the transplant was a success (unknowingly thanks to his old colleagues and friends, Doug Ross and Carol Hathaway).

In "And In The End...", the series finale, Carter uses his family fortune to open the Joshua Carter Center, a medical clinic for the underprivileged. Later on, in a discussion with Tony Gates, he indicates he might come back to County for good.

Early in the series, Carter's plots typically stayed in the realm of the ER. In a symbolic gesture of this transference, he was told by Mark Greene "you set the tone" on Greene's last day in the ER. Greene had been told the same thing, by Dr. Morgenstern, in the pilot episode in Season 1 of the show, after Carol's suicide attempt. Carter, in turn, said the same thing to Dr. Archie Morris as Carter left the ER, although Morris did not understand the significance.

Throughout the course of the series (particularly at the beginning of Season 8) we meet various members of Carter's wealthy family. His father, John (Jack) Truman Carter, Jr. (played by Michael Gross), is caring but stiff, and very acquiescent with his wife. He and Carter have an awkward relationship. Carter's mother, Eleanor (played by Mary McDonnell), is emotionally distant and cold. Her personality apparently became even colder after Carter's older brother, Robert (Bobby), dies from leukemia. Carter's grandfather, John Truman Carter, Sr. (portrayed by George Plimpton), is the most disappointed by Carter's career choice, and though Carter respects him, he also resents him for that. Carter's grandmother, Millicent Carter (played by Frances Sternhagen), is a benefactor of the hospital, even funding Nurse Hathaway's clinic. Carter is very close to his grandmother (whom he calls "Gamma") and intermittently lives at her home. They do occasionally argue, however, usually in regard to Carter's reluctance to participate in matters related to the family foundation. Chase Carter (Jonathan Scarfe) is John's first cousin and a "functioning" heroin addict. Carter, with the assistance of his colleague Anna, attempts to detox and rehabilitate him, but fails. Chase eventually overdoses, resulting in severe brain damage. Carter pleads for the family to keep Chase in physical therapy, and Chase improves significantly. Elaine Nichols Carter (played by Rebecca DeMornay), the ex-wife of another of Carter's cousins, comes to the hospital for treatment for breast cancer and she and Carter conduct an affair.

Carter had a number of unsuccessful relationships over his history on the show. Significant girlfriends (and the actresses that played them) are listed below:

Carter with Kem in the Congo.