The Natya Shastra (Sanskrit: Nātyaśāstra नाट्य शास्त्र) is an ancient Indian treatise on the performing arts, encompassing theatre, dance and music. It was written during the period between 200 BC and 200 AD in classical India and is traditionally attributed to the Sage Bharata.

The Natya Shastra is incredibly wide in its scope. While it primarily deals with stagecraft, it has come to influence music, classical Indian dance, and literature as well. It covers stage design, music, dance, makeup, and virtually every other aspect of stagecraft. It is very important to the history of Indian classical music because it is the only text which gives such detail about the music and instruments of the period. Thus, an argument can be made that the Natya Shastra is the foundation of the fine arts in India. The most authoritative commentary on the Natya Shastra is Abhinavabharati by Abhinavagupta.

The text, which now contains 6000 slokas, is attributed to the muni (sage) Bharata and is believed to have been written during the period between 200 BC and 200 AD. The Natya Shastra is based upon the much older Gandharva Veda (appendix to Sama Veda) which contained 36000 slokas.[1] Unfortunately there are no surviving copies of the Natya Veda. Though many scholars believe most slokas were transmitted only through the oral tradition, there are scholars who believe that it may have been written by various authors at different times.

The document is difficult to date and Bharata's historicity has also been doubted, some authors suggesting that it may be the work of several persons. However, Kapila Vatsyayan has argued[2] that based on the unity of the text, and the many instances of coherent reference of later chapters from earlier text, the composition is likely that of a single person. Whether his/her name really was Bharata is open to question[2]: near the end of the text we have the verse: "Since he alone is the leader of the performance, taking on many roles, he is called Bharata" (35.91[3]), indicating that Bharata may be a generic name. It has been suggested that Bharata is an acronym for the three syllables: bha for bhāva (mood), rā for rāga (melodic framework), and ta for tāla (rhythm). However, in traditional usage Bharata has been iconified as muni or sage, and the work is strongly associated with this personage.

Written in Sanskrit, the text consists of 6,000 sutras, or verse stanzas, incorporated in 36 chapters. Some passages are composed in a prose form.

The title can be loosely translated as A compendium of Theatre or a A Manual of Dramatic Arts. Nātya, or nāṭaka means Dramatic Arts. In contemporary usage, this word does not include dance or music, but etymologically the root naṭ refers to "dance".

The discourse is set in a frame where a number of munis approach Bharata, asking him about nāṭyaveda (lit. nāṭya=drama,performance; veda=knowledge). The answer to this question comprises the rest of the book, which is thus loosely a dialogue. Bharata says that all this knowledge is due to Brahma. At one point he mentions that he has a hundred "sons" who will spread this knowledge, which suggests that Bharata may have had a number of disciples whom he trained.

Classical Indian dance:
the inheritor of the Natya Shastra

The Natya Shastra ranges widely in scope, from issues of literary construction, to the structure of the stage or mandapa, to a detailed analysis of musical scales and movements (murchhanas), to an analysis of dance forms that considers several categories of body movements, and their impacts on the viewer.

Bharata describes 15 types of drama ranging from one to ten acts. The principles for stage design are laid down in some detail. Individual chapters deal with aspects such as makeup, costume, acting, directing, etc. A large section deals with meanings conveyed by the performance (bhavas) get particular emphasis, leading to a broad theory of aesthetics (rasas).

Four kinds of abhinaya (acting, or histrionics) are described – that by body part motions (angika), that by speech (vAchika), that by costumes and makeup (AhArya), and the highest mode, by means of internal emotions, expressed through minute movements of the lips, eyebrows, ear, etc. (sAttvika).[4] 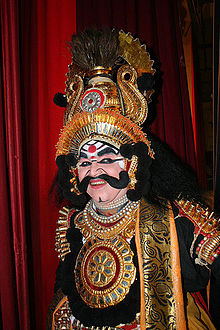 "A Yakshagana artist expressing emotions on stage. Vaachikabhinaya is an important part of Yakshagana"

The Nātyashāstra delineates a detailed theory of drama comparable to the Poetics of Aristotle. Bharata refers to bhavas, the imitations of emotions that the actors perform, and the rasas (emotional responses) that they inspire in the audience. He argues that there are eight principal rasas: love, pity, anger, disgust, heroism, awe, terror and comedy, and that plays should mix different rasas but be dominated by one.

After the Samaveda, which dealt with ritual utterances of the Vedas, the Natyashastra was the first major text that dealt with music at length. It was considered the defining treatise of Indian classical music until the 13th century, when the stream bifurcated into Hindustani classical music in North India and Pakistan, due to the influence of Persian and Arab music, and Carnatic classical music in South India, the stronghold of the Hindu kingdoms.

While much of the discussion of music in the Natyashastra focuses on musical instruments, it also emphasizes several theoretical aspects that remained fundamental to Indian music:

Jatis are elaborated in greater detail in the text Dattilam, composed around the same time as the Natyashastra.

To prove the utility of śrutis in music, Bharata Muni, while explaining Shadja grama and Madhyam grama in chapters 28 and 30 of Bharat Natya Shastra, expounded the Sarana Chatushtai – the only experiment according to Bharata to obtain the correct physical configuration of Śruti Swara arrangement to Shadja Grama notes on any musical instrument (Sa, Re, Ga, Ma, Pa, Dha, Ni Sa, corresponding to 4-3-2-4-4-3-2, totalling 22 śrutis in a Saptak). Sarana Chatushtai in recent centuries has been demonstrated and proven by Avinash Balkrishna Patwardhan in the year 1998 on flute as well as on sitar (this has also helped him develop a methodology for producing perfectly tuned flutes for different thatas). This is the only known correct interpretation of the Bharata Muni's Sarana Chatushtai after Bharata Muni himself and probably Sharang Dev.

The Natyashastra also suggests several aspects of musical performance, particularly its application to vocal, instrumental and orchestral compositions. It also deals with the rasas and bhavas that may be evoked by music.

Natyashastra remained an important text in the fine arts for many centuries; so much so that it is sometimes referred to as the fifth veda. Much of the terminology and structure of Indian classical music and Indian classical dance were defined by it. Many commentaries have expanded the scope of the Natya Shastra; most importantly we may include Matanga's Brihaddesi (5th–7th c.), Abhinavagupta's Abhinavabharati (which unifies some of the divergent structures that had emerged in the intervening years, and outlines a theory of artistic analysis) and Sharngadeva's Sangita Ratnakara (13th c. work that unifies the raga structure in music).[5] The analysis of body forms and movements also influenced sculpture and the other arts in subsequent centuries.[2] The structures of music outlined in the Natya Shastra retain their influence even today, as seen in the seminal work Hindustani Sangeetha Padhathi[6] by Vishnu Narayan Bhatkhande from the early 20th century. The theory of rasa described in the text has also been a major influence on modern Indian cinema especially in the Malayalam Film Industry.

Kuncitam, one of the 108 karanas described in Natya Shastra

Other books and references