New York State Route 309 (NY 309) is a state highway located entirely in Fulton County, New York, in the United States. The southern terminus of the route is at an intersection with NY 29A in Gloversville. The northern terminus of the route is at a junction with Lily Lake Road in the hamlet of Bleecker, where the highway continues north and west as County Route 112 (CR 112) to London Bridge Road (CR 111, near NY 10 and NY 29A) at West Caroga Lake in the town of Caroga. Part of NY 309 and all of CR 112 is located within Adirondack Park. NY 309 was assigned to its current alignment as part of the 1930 renumbering of state highways in New York.

NY 309 begins at an intersection with NY 29A in downtown Gloversville. The route heads northward as Bleecker Street, passing large commercial buildings as it heads north through the city. At Spring Street—two blocks north of NY 29A—the surroundings become more residential as the commercial structures are replaced by homes. The route continues on, crossing Cayadutta Creek between 8th Avenue and McLaren Street before leaving Bleecker Street at 11th Avenue to follow an unnamed western extension of 11th Avenue. At this point, the amount of development along NY 309 drops substantially as it parallels Cayadutta Creek and heads northwestward out of the city limits.[3] At this point, maintenance of the route shifts from the city of Gloversville to the New York State Department of Transportation (NYSDOT).[4] 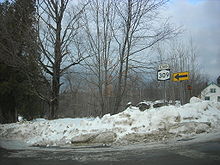 Now in the town of Johnstown, the route winds its way northwestward as it follows Cayadutta Creek through an area of hilly terrain south of Adirondack Park. Development along the route largely ends at the intersection with West State Street; however, a pair of isolated homes are situated on NY 309 about 0.25 miles (0.40 km) to the northeast ahead of an intersection with CR 122, an east–west highway that serves the Fulton County Infirmary a short distance to the west. The route continues to wind its way through the mountains to the hamlet of West Bush, where Cayadutta Creek ends amidst a small cluster of houses. The route turns north at this point, passing a handful of homes before leaving the community upon passing through a narrow pass between two hills.[3]

North of West Bush, the route rapidly ascends in elevation as it climbs up the side of a large mountain. Along this stretch, the route veers to the northwest and southeast as it heads through an area of wilderness. NY 309 crosses the Blue Line into Adirondack Park near the mountain's summit. Upon reaching the top of the mountain, the highway straightens out and heads northward for roughly 0.5 miles (0.8 km) across the hill's plateau. Upon reaching the other side, the road gradually descends in elevation as it passes by Mountain Lake and enters the town of Bleecker. The highway continues its northeastward descent into the small lakeside hamlet of Bleecker, where NY 309 ends at an intersection with Lily Lake Road. At this point, the roadway becomes CR 112.[3] 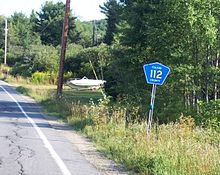 CR 112 heads northwest from Bleecker, passing Peck Lake to the northeast and Lily Lake to the southwest as it winds its way around several small hills. After 2 miles (3.2 km), the route curves to the north and serves Bleecker Center, an isolated hamlet centered at the junction of CR 112 and CR 145. The former continues northwest across relatively low-lying areas to Peters Corners, an equally isolated hamlet located at the intersection of CR 112 and CR 125. CR 112 turns southwest here and begins to climb up the side of a small mountain overlooking Peters Corners.[5]

As the route heads west, it runs along the base of Hogback, a large mountain with two peaks that reach over 2,400 feet (730 m) in elevation. Past Hogback, CR 112 enters the town of Caroga, where the route heads west across nearly flat terrain to the hamlet of Caroga Lake. CR 112 bypasses most of the hamlet to the north; as a result, it passes through only lightly developed areas as the route nears its end. CR 112 intersects NY 10 and NY 29A just 70 feet (21 m) from where it officially ends at an intersection with CR 111, which itself begins at NY 10 and NY 29A just 80 yards (73 m) to the south.[5]

Map of Fulton County with CR 112 highlighted in red

Part of CR 112 was originally part of an old Indian trail that went from Johnstown to Hamilton County via Bleecker. At some point, part of the trail in the vicinity of Bleecker was converted into a plank road that served several locations and churches north of Bleecker.[6][clarification needed] Meanwhile, NY 309 was assigned as part of the 1930 renumbering of state highways in New York to a connector highway between the city of Gloversville and the hamlet of Bleecker.[1]

The entire route is in Fulton County.