The Doric order was one of the three orders or organizational systems of ancient Greek or classical architecture; the other two canonical orders were the Ionic and the Corinthian.

In their original Greek version, Doric columns stood directly on the flat pavement (the stylobate) of a temple without a base; their vertical shafts were fluted with 20 parallel concave grooves; and they were topped by a smooth capital that flared from the column to meet a square abacus at the intersection with the horizontal beam (entablature) that they carried. The Parthenon has the Doric design columns. 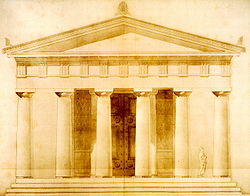 Pronounced features of both Greek and Roman versions of the Doric order are the alternating triglyphs and metopes. The triglyphs are decoratively grooved with three vertical grooves ("tri-glyph") and represent the original wooden end-beams, which rest on the plain architrave that occupies the lower half of the entablature. Under each triglyph are peglike "stagons" or "guttae" (literally: drops) that appear as if they were hammered in from below to stabilize the post-and-beam (trabeated) construction. They also served to "organize" rainwater runoff from above. A triglyph is centered above every column, with another (or sometimes two) between columns, though the Greeks felt that the corner triglyph should form the corner of the entablature, creating an inharmonious mismatch with the supporting column. The spaces between the triglyphs are the "metopes". They may be left plain, or they may be carved in low relief.

The architecture followed rules of harmony. Since the original design came from wooden temples and the triglyphs were real heads of wooden beams, every column had to bear a beam which lay across the centre of the column. Triglyphs were arranged regularly; the last triglyph was centred upon the last column (illustration, right: I.). This was regarded as the ideal solution which had to be reached.

Changing to stone cubes instead of wooden beams required full support of the architrave load at the last column. At the first temples the final triglyph was moved (illustration, right: II.), still terminating the sequence, but leaving a gap disturbing the regular order. Even worse, the last triglyph was not centered with the corresponding column. That “archaic” manner was not regarded as a harmonious design. The resulting problem is called The doric corner conflict. Another approach was to apply a broader corner triglyph (III.) but was not really satisfying. 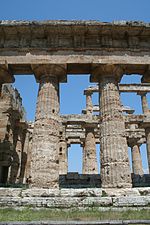 An example of the early archaic Doric order- Temple of Poseidon in Paestum, Italy.

Because the metopes are somewhat flexible in their proportions, the modular space between columns (“intercolumniation”) can be adjusted by the architect. Often the last two columns were set slightly closer together (corner contraction), to give a subtle visual strengthening to the corners. That is called the “classic” solution of the corner conflict (IV.). Triglyphs could be arranged in a harmonic manner again, and the corner was terminated with a triglyph. However, final triglyph and column were often not centered.

The Doric order of the Parthenon

Early examples of the Doric order include the temples at Paestum in southern Italy, a region called Magna Graecia, which was settled by Greek colonists and retained a strongly Hellenic culture.

The Temple of the Delians is a “peripteral” Doric order temple, the largest of three dedicated to Apollo on the island of Delos. It was begun in 478 BC and never completely finished. During their period of independence from Athens, the Delians reassigned the temple to the island of Poros. It is “hexastyle”, with six columns across the pedimented end and thirteen along each long face. All the columns are centered under a triglyph in the frieze, except for the corner columns. The plain, unfluted shafts on the columns stand directly on the platform (the stylobate), without bases. The recessed “necking” at the top of the shafts and the wide cushionlike echinus are slightly self-conscious archaicizing features, for Delos is Apollo's ancient birthplace.

The Roman Doric order from the Theater of Marcellus: triglyphs centered over the end column

A classic statement of the Greek Doric order is the Temple of Hephaestus in Athens, built about 447 BC. The contemporary Parthenon, the largest temple in classical Athens, is also in the Doric order, although the sculptural enrichment is more familiar in the Ionic order: the Greeks were never as doctrinaire in the use of the Classical vocabulary as Renaissance theorists or neoclassical architects. The detail (illustration, left), part of the basic vocabulary of trained architects from the later 18th century onwards, shows how the width of the metopes was flexible: here they bear the famous bas-relief sculptures of the battle of Lapiths and Centaurs.

In the Roman Doric version (illustration, left), the height of the entablature has been reduced. The endmost triglyph is centered over the column rather than occupying the corner of the architrave. The columns are slightly less robust in their proportions. Below their caps, an astragal molding encircles the column like a ring. Crown moldings soften transitions between frieze and cornice and emphasize the upper edge of the abacus, which is the upper part of the capital. Roman Doric columns also have moldings at their bases and stand on low square pads or are even raised on plinths. In the Roman Doric mode, columns are not invariably fluted. Since the Romans dropped the request of the triglyph covered corner, now both columns and triglyphs could be arranged in equidistant order again and well centered together. The architrave corner needed to be left “blank” (illustration, right, V.).

The Roman architect Vitruvius, following contemporary practice, outlined in his treatise the procedure for laying out constructions based on a module, which he took to be one half a column's diameter, taken at the base. An illustration of Andrea Palladio's Doric order, as it was laid out, with modules identified, by Isaac Ware, in The Four Books of Palladio's Architecture (London, 1738) is illustrated at Vitruvian module.

When Greek Revival architecture was introduced at the beginning of the 19th century, the Greek Doric order had not previously been widely used. The first engraved illustrations of the Greek Doric order dated to the mid-18th century. Its appearance in the new phase of Classicism brought with it new connotations of high-minded primitive simplicity, seriousness of purpose, noble sobriety, and, in the United States, republican virtues. In a customs house, Greek Doric suggested incorruptibility; in a Protestant church a Greek Doric porch promised a return to an untainted early church; it was equally appropriate for a library, a bank or a trustworthy public utility (illustration, left).

According to Vitruvius the height of Doric columns is six or seven times the diameter at the base.[1] This gives the Doric columns a shorter, thicker look than Ionic columns, which have 8:1 proportions. It is suggested that these proportions give the Doric columns a masculine appearance, whereas the more slender Ionic columns appear represent a more feminine look. This sense of masculinity and femininity was often used to determine which type of column would be used for a particular structure. 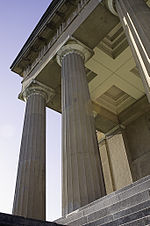