The Archimedes' screw, also called the Archimedean screw or screwpump, is a machine historically used for transferring water from a low-lying body of water into irrigation ditches. The screw pump is commonly attributed to Archimedes on the occasion of his visit to Egypt, but this tradition may only reflect that the apparatus was unknown before Hellenistic times and introduced in his life-time by unknown Greek engineers.[1]

The Archimedes' Screw consists of a screw inside a hollow pipe. The screw is turned usually by a windmill or by manual labor. As the bottom end of the tube turns, it scoops up a volume of water. This amount of water will slide up in the spiral tube as the shaft is turned, until it finally pours out from the top of the tube and feeds the irrigation systems. It was mostly used for draining water out of mines or other areas of low lying water.

The contact surface between the screw and the pipe does not need to be perfectly water-tight because of the relatively large amount of water being scooped at each turn with respect to the angular frequency and angular speed of the screw. Also, water leaking from the top section of the screw leaks into the previous one and so on, so a sort of mechanical equilibrium is achieved while using the machine, thus limiting a decrease in mechanical efficiency.

In some designs, the screw is fixed to the casing and they rotate together instead of the screw turning within a stationary casing. A screw could be sealed with pitch resin or some other adhesive to its casing, or, cast as a single piece in bronze, as some researchers have postulated as being the devices used to irrigate the Hanging Gardens of Babylon, one of the Seven Wonders of the Ancient World. Depictions of Greek and Roman water screws show the screws being powered by a human treading on the outer casing to turn the entire apparatus as one piece, which would require that the casing be rigidly attached to the screw.

Along with transferring water to irrigation ditches, this device was also used for reclaiming land from under sea level in the Netherlands and other places in the creation of polders. A part of the sea would be enclosed and the water would be pushed up out of the enclosed area, starting the process of draining the land for use in agriculture. Depending on the length and diameter of the screws, more than one machine could be used to successively lift the same water.

An Archimedes screw was used by British soils engineer Dr. John Burland in the successful 2001 stabilization of the Leaning Tower of Pisa. Small slivers of subsoil saturated by groundwater were removed from far below the north side of the Tower, and the weight of the tower itself corrected the lean.

Archimedes screws are used in sewage treatment plants because they cope well with varying rates of flow and with suspended solids. An auger in a snow blower or grain elevator is essentially an Archimedes screw.

The principle is also found in pescalators, which are Archimedes screws designed to lift fish safely from ponds and transport them to another location. This technology is primarily used at fish hatcheries as it is desirable to minimize the physical handling of fish.

The invention of the water-screw is credited to the Greek polymath Archimedes of Syracuse in the 3rd century BC.[3] Its tentative attribution to the 6th century BC Babylonian king Nebuchadnezzar II by the assyriologist Dalley or to pre-Hellenistic Egypt[4] has been refuted on the grounds of "the total lack of any literary and archaeological evidence for the existence of the water-screw before ca. 250 BC".[5][6] The German engineer Konrad Kyeser, in his Bellifortis (1405), equips the Archimedes screw with a crank mechanism. This mechanism soon replaced the ancient practice of working the pipe by treading.[7]

It can also be found in some injection molding machines, die casting machines and extrusion of plastics, which employ a screw of decreasing pitch to compress and melt the material. Finally, it is also used in a specific type of positive displacement air compressor: the rotary screw air compressor. On a much larger scale, Archimedes' screws of decreasing pitch are used for the compaction of waste material. 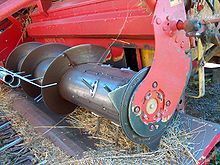 A screw conveyor is an Archimedes' screw contained within a tube and turned by a motor so as to deliver material from one end of the conveyor to the other. It is particularly suitable for transport of granular materials such as plastic granules used in injection molding, and cereal grains. It may also be used to transport liquids. In industrial control applications the conveyor may be used as a rotary feeder or variable rate feeder to deliver a measured rate or quantity of material into a process.

If water is poured into the top of an Archimedes' screw, it will force the screw to rotate. The rotating shaft can then be used to drive an electric generator. Such an installation has the same benefits as using the screw for pumping: the ability to handle very dirty water and widely varying rates of flow at high efficiency. Settle Hydro and Torrs Hydro are two reverse screw micro hydro schemes operating in England. As a generator the screw is good at low heads, commonly found in English rivers.