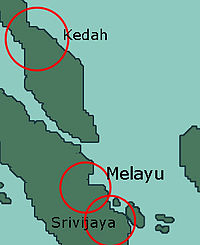 Melayu Kingdom (also known as Ma-La-Yu in Chinese text 末羅瑜國, Malay in English)[1][2][3] was a classical Southeast Asian kingdom that existed between the 7th and the 13th century of the common era. It was established around present-day Dharmasraya on Sumatera, Indonesia, approximately 300 km north of Palembang. It was founded by society in Batanghari river and the gold trader from Minangkabau hinterland.[4] Around 688 CE, emperor Jayanasa integrated Malayu into the Srivijayan empire.

According to Yijing[2][5], the early Melayu was an independent kingdom. In the late 7th century, the monk Yijing recorded that the second time he returned back to Ma-La-Yu, it was captured by Srivijaya. Further, Melayu had accessed to gold producing areas in the hinterland of Sumatra. This slowly increased the prestige of Melayu which traded various local goods, including gold, with foreign traders. The word Melayu was inscribed (year 1286) on the Padang Roco inscription statue at the headwaters of Batang Hari river[1][6]. After that on 1347, King Adityawarman sculpt statue of Amoghapasa again, when he declared a new state established under the name of Malayapura[7]. According to the Encyclopedia of Malaysia[8], ancient Indian texts in Ramayana and Vayu Purana (3rd century BCE), the Sanskrit word 'Malayadvipa' (literally 'Malay Island') was mentioned, referring to Sumatra. The Khmer recorded the nation of Melayu, however, its progeny of Srivijaya was also called Melayu.

In the later Mongol Yuan Dynasty and Ming Dynasty, the word Ma-La-Yu was mentioned often (in the history of China) to refer to a nation from southern sea with different spelling due to the change of dynasty.

(in English: Animosity occurred between Siam and Ma-la-yu with both killing each other...)

From the book Travels of Marco Polo, the word "Malauir" was mentioned to refer to an area somewhere in the southern part of the Malay peninsula. [1]

The word Melayu is also mentioned in the Sejarah Melayu.

"Here now is the story of a city called Palembang in the land of Andelas (Sumatra). It was ruled by Demang Lebar Daun, a descendant of Raja Shulan, and its river was the Muara Tatang. In the upper reaches of the Muara Tatang was a river called Melayu, and on that river was a hill called Si-Guntang Mahameru'...."[2] 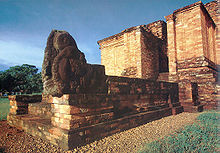 Candi Gumpung, a Buddhist temple at Muaro Jambi of Melayu Kingdom, later integrated as one of Srivijaya's important urban center.

Between 1079 and 1088, Chinese record shows that Srivijaya sent ambassadors from Jambi and Palembang.[9] In 1079 in particular, an ambassador from Jambi and Palembang each visited China. Jambi sent two more ambassadors to China in 1082 and 1088.[9] This suggests that the center of Srivijaya frequently shifted between the two major cities during that period.[9] The Chola expedition and as well as changing trade route weakened Palembang, allowing Jambi to take the leadership of Srivijaya from the 11th century on.[10]

Almost a century after taking over Palembang's role as the center of an empire, Jambi and Srivijaya experienced decline in influence.[11] This was caused by a change of policy by the Song dynasty to no longer accept ambassadors from Srivijaya and Jambi's inability to cope with changing scenario. Instead of the Jambi controlling the trade through tributary system, traders were allowed to trade directly instead.[12]

Mahesa/Kebo/Lembu Anabrang was a General of Singhasari, he conquered Srivijaya and Melayu in 1288. In the year 1347, Gajah Mada the military leader of Majapahit installed Adityawarman as the king of Melayu to prevent the revival of Srivijaya. Adityawarman later conquered Tanah Datar to take control of the gold trade and founded a kingdom in Pagar Ruyung. In the year 1377, the Majapahit defeated Palembang and ended effort to revive Srivijaya. The last prince of Srivijayan origin, Parameswara, fled to Temasik to seek refuge before moving farther north, where he founded what would become the Malacca Sultanate.