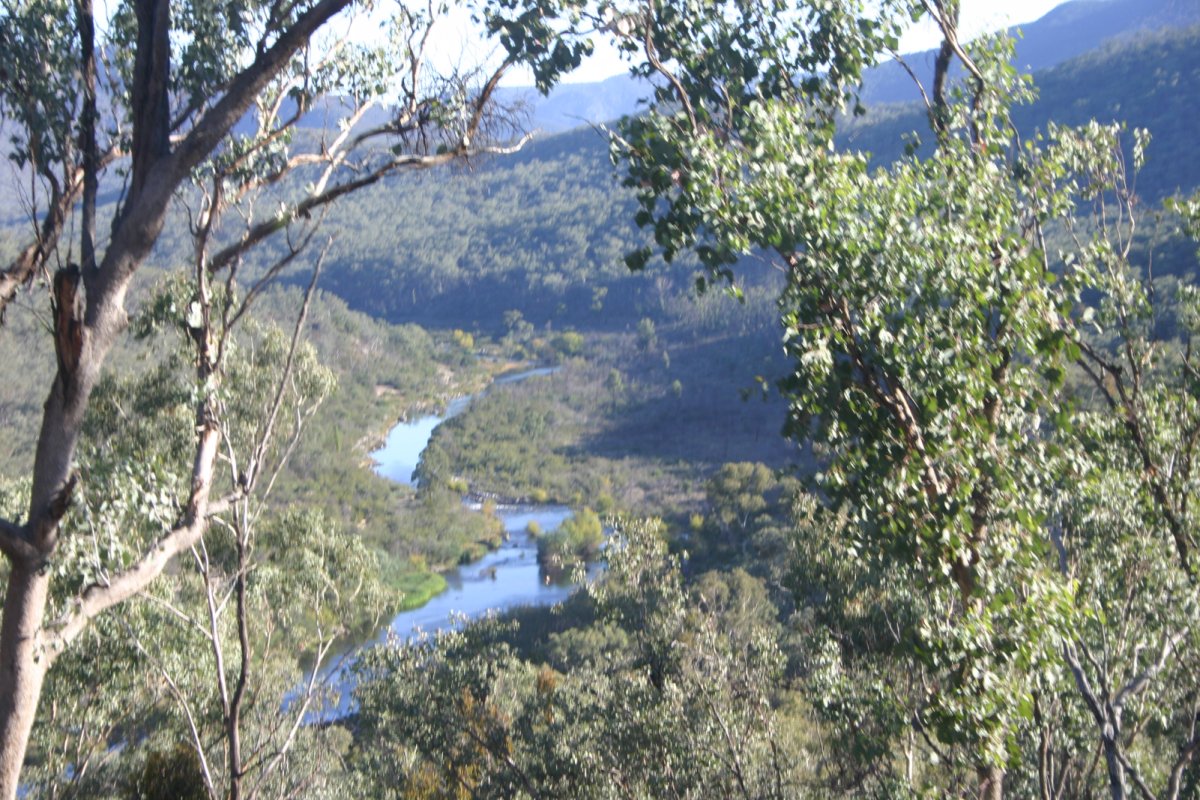 The main headwaters, the Snowy, the and the (formerly known as the "Crackenback River") meet near Jindabyne and winds 352 Km southwards through inaccessible country, including the , eventually reaching the sea at Marlo, near Orbost, Victoria.

The general distribution of rainfall over the Snowy River catchment is controlled by orographic effects. There is a strong rainfall gradient across the catchment. Average annual rainfall range from 1,800 mm over areas above 1,500m in the Alps of the north western corner of the catchment to below 500 mm along the rain shadow effected north eastern catchment around Dalgety. High rainfalls in winter and spring combine with the spring snow melt to produce the highest average stream flow in the months from June to November, with October having the largest monthly flows of the year.

The Snowy River originally had a huge flow from the spring snow-melt which flowed directly into the sea. In the 1950s, as part of the , a network of dams was built to collect and divert 99% of the Snowy River's flow through the mountains, to provide more water to the and for and to generate .

During the 1990s the low level of water in the Snowy River was a major environmental concern in Victoria, with a political campaign to increase the water from one per cent to 28 per cent of its original flow from the dam at Jindabyne. An independent candidate from the East Gippsland district, , was elected to the in 1999, re-elected in 2002 and 2006, on a platform to increase the flow of water in the Snowy River.

However, after Ingram was elected to office, he was instrumental in the corporatisation of the Snowy Scheme, swinging the Victorian Parliament to sign the legislation. Although governments promised that corporatisation would not lead to privatisation, by November 2005 the Victorian, NSW and Commonwealth Governments made their intentions clear that they would sell the Snowy Scheme through a public float. The Australian people rallied in a and by June 2006 the Australian Prime Minister withdrew the Commonwealth's intention to sell Snowy Hydro.

Community advocates and former Snowy Scheme senior management and employees continue to block moves by the incumbent CEO for Snowy Hydro Terry Charlton to sell or lease the Snowy Scheme two years after governments promised not to sell the Snowy .

Bevitt, R. and Jones H. (2008). Water quality in the Snowy River before and after the first environmental flow release from the Mowamba River. Snowy River Flow Response Monitoring. NSW Department of Water and Energy. Sydney, NSW.

Brizga, S. O. and Finlayson, B. L. 1992. The Snowy River sediment study: investigation into the distribution, transport and sources of sand in the Snowy River between Lake Jindabyne and Jarrahmond. Department of Water Resources Victoria Report No. 81.