Mister Miracle (Scott Free) is a fictional superhero published by DC Comics. He first appeared in Mister Miracle #1 (April 1971) and was created by Jack Kirby.[1]

The original title featuring this character was the longest-lasting of the short-lived Fourth World tetralogy, lasting 18 issues while the other titles (New Gods and The Forever People) were cancelled after only 11 issues. The most traditionally super-heroesque comic of the various Fourth World titles, the last seven issues (as well as later incarnations of the series) would downplay the Fourth World mythology that drove the other titles in favor of more traditional superhero fare. The title was briefly revived in the late 1970s for an additional seven issues written by Steve Englehart and Steve Gerber, before abruptly ending with #25 with several storylines unresolved.

When the character was revived as part of Keith Giffen's Justice League line-up in 1987, a one-shot special was published with art by Steve Rude in 1987.[2]

This special was followed by an ongoing series which began in 1989, written by then-current Justice League scripter J.M. DeMatteis, and drawn by British artist Ian Gibson. Other co-writers/writers who contributed to the title include Keith Giffen, Len Wein, and Doug Moench. This run lasted 28 issues before cancellation in 1991. The series was largely humor-driven, per Keith Giffen's reimagining Scott Free, his wife Big Barda, and their friend Oberon (who pretended to be Scott's uncle) as living in suburbia when they were not fighting evil with the Justice League.

In 1996, a series written by Kevin Dooley showed Scott attempting to escape his destiny as a New God by setting up a charitable foundation in New York. This only ran for seven issues, before all Fourth World titles were canceled for the launch of Jack Kirby's Fourth World.

With the launching of Grant Morrison's meta-series "Seven Soldiers of Victory", Mr. Miracle was revived as a four-issue mini-series. However, this mini-series focused instead on Scott's sidekick and apprentice Shiloh Norman, who Morrison has established as the new Mr. Miracle.

In addition, Scott's ally (and wife) Big Barda was made a member of the revived Justice League and appeared regularly in the Jack Kirby's Fourth World series by John Byrne, as well as several issues of "The Brave and the Bold", where Mr. Miracle teamed up with Batman. 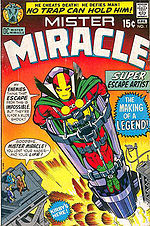 Scott Free is the son of Izaya (Highfather), the ruler of New Genesis, and his wife named Avia. However, as part of a diplomatic move to stop a destructive war against the planet Apokolips, Highfather agreed to an exchange of heirs with the galactic tyrant Darkseid; the exchange of heirs guaranteed that neither side would attack the other. Scott traded places with Darkseid's second born son Orion.

Scott grew up in one of Granny Goodness' "Terror Orphanages" with no knowledge of his own heritage. As he matured, Scott rebelled against the totalitarian ideology of Apokolips. Hating himself for being unable to fit in, he was influenced by Metron to see a future beyond Darkseid. Scott became part of a small band of pupils who were tutored in secret by the rebel Himon, a New Genesian living as a "Hunger Dog" on Apokolips. It was at these meetings that he met fellow pupil Big Barda, who would later become his wife.

Eventually, Scott Free escaped and fled to Earth. His escape, long anticipated and planned for by Darkseid, nullified the pact between Darkseid and Highfather and gave Darkseid the excuse he needed to revive the war with New Genesis. Once on Earth, he became the protégé of a circus escape artist, Thaddeus Brown, whose stage name was Mister Miracle. Brown was impressed with Scott's skills (especially as supplemented with various advanced devices he had taken from his previous home). Scott also befriended Brown's assistant, a dwarf named Oberon. When Thaddeus Brown was murdered, Scott Free assumed the identity of Mister Miracle. Barda later followed Scott to Earth, and the two used their powers, equipment, and skills in the war against Darkseid, who was still interested in recapturing both of them. Eventually, tired of being chased on Earth by Darkseid's servants, Scott returned to Apokolips and won his freedom by legal means, through trial by combat.

Scott Free later became a member of the Keith Giffen-era JLA (as did Barda and Oberon), which recast him and Big Barda as semi-retired super-heroes that sought to live quiet lives in the suburbs when they were not involved in Justice League-related adventures. In particular, Scott Free was recast as a hen-pecked husband, who often found himself on the receiving end of his wife's temper, over her desire to live a quiet life on Earth.

During his time in the League, Scott developed an intense rivalry with League villain Manga Khan. The villainous intergalactic trader and black marketer repeatedly kidnapped Scott, ultimately convincing Scott's conniving former manager Funky Flashman into forging documents forcing Scott to work for Manga as his personal entertainer. To force him to go along willingly, Khan replaced Scott with a life-like robot who was ultimately murdered by Despero during his first mission with the Justice League. Scott ultimately escaped from Manga Khan's clutches and reunited with his wife and friends, though the shock was enough to cause Scott to ultimately quit the League and to take on a protege in the form of Shiloh Norman.

In the conclusion of Final Crisis, many of the New Gods are all seemingly reborn. Among their numbers are the apparently resurrected Mister Miracle, along with Barda.

Like all the New Gods, Mister Miracle is functionally immortal, having ceased aging physically near the age of 30, also he has developed immunity to a number of toxins and diseases. He's stronger than a human with superhuman strength, agility, resistance, coordination and reflexes. Mister Miracle's stamina and endurance is nothing short of amazing. Due to the naturally exhausting and extensive rigors of his life on Apokolips, Mister Miracle is able to manage his stamina on a certain amount of rest and sustenance (more than minimal) so that it seems he is able to constantly function, though this is not entirely the case. Tied directly to his strength and invulnerability, even his immunity to a certain extent, Mister Miracle can actually function at peak efficiency for almost 48 hours before needing to eat and rest off the stress.

Mr. Miracle was trained in Apokolips like an aero-trooper being a master combatant and in the handling of weapons. Also, he is a Master Escapologist and expert performer, Scott is marginally better at escapes than the Batman and much of his skill is the result of his advanced nervous system. Mr. Miracle usually knows as much about a trap as the builder.

Mr. Miracle has an enhanced intellect and he is knowledgeable about the Fourth World and much of our Universe for such a reason he's very persuasive and an extremely ingenious inventor using advanced technology like the motherbox, a multi-cube, aero disks and others devices. Mister Miracle possesses the Alpha Effect, the antithesis of Darkseid's Omega Energy. Its powers seem to cancel out or undo Darkseid's Omega Effect.

Scott revealed he possesses greater power as the embodiment of the Anti-Life Equation, this power for all purposes allows him to warp reality, space, time, matter and antimatter on a cosmic level. The ability is apparently fueled by rage and negative emotions which Scott himself doesn't have a personality for normally. The Anti-Life Equation is said to give the being who learns it power to dominate the will of all sentient and sapient races. It is called the Anti-Life Equation because "if someone possesses absolute control over you - you're not really alive." but he refuses to use it as it reduces other beings to mindless slaves.[4] 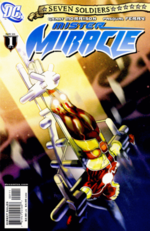 Young Shilo Norman was the informal ward of escapologist Thaddeus Brown (Mister Miracle I), and he also served as an occasional stand-in. When Brown was murdered by a mobster named Steel Hand, Scott avenged his new friend's death by taking on the identity of Mister Miracle and brought Steel Hand to justice. After Brown's death, Shilo worked with Scott Free (the new Mister Miracle) and Scott's wife Barda.

A master escape artist himself, the now-adult Shilo was appointed security chief of the Slabside Island Maximum Security prison for Metahumans also known as the Slab. He held his own during the Joker's "Last Laugh" riot and was promoted to Warden of the Slab, which had by then been relocated to Antarctica. A somewhat reconceived Shilo Norman appears in Grant Morrison's Seven Soldiers crossover. In Final Crisis #2, Shilo tells Sonny Sumo,"There was a cosmic war and the powers of evil won", prompting him to form a team to fight the evil gods.

The Mister Miracle series (plus Forever People, New Gods, and Superman's Pal Jimmy Olsen) earned Jack Kirby the 1971 Shazam Award for Special Achievement by an Individual in the comic industry.

Jack based some of his characters (not all) on people in his life or in the news.... Big Barda's roots are not in doubt. The visual came about shortly after songstress Lainie Kazan posed for Playboy...and the characterization between Scott 'Mr. Miracle' Free and Barda was based largely — though with tongue-in-cheek — on the interplay betwixt Jack and his wife Roz. Of course, the whole 'escape artist' theme was inspired by an earlier career of writer-artist Jim Steranko. Scott's conniving manager Funky Flashman was based on Stan Lee.[1]