Drums Along the Mohawk

Drums Along the Mohawk

Drums Along the Mohawk is a 1939 historical Technicolor film based upon a 1936 novel of the same name by American author, Walter D. Edmonds. The film was produced by Darryl F. Zanuck and directed by John Ford. Henry Fonda and Claudette Colbert portray settlers on the New York frontier during the American Revolution. The couple suffer British, Tory, and Indian attacks on their farm before the Revolution ends and peace is restored. The film—Ford's first colour feature—was well received, was nominated for two Academy Awards and became a major box office success, grossing over US$1 million in its first year.

In 1776, American colonists Gilbert Martin (Henry Fonda) and Lana Borst (Claudette Colbert) marry and leave her luxurious home in Albany, New York for a small farm in Deerfield on the western frontier of the Mohawk Valley in central New York. Lana has difficulty in adjusting to frontier life, but soon is working alongside her husband.

The American Revolution begins. Lana is pregnant and miscarries when the Martin farm is burned to the ground in an Indian attack led by a Tory, Caldwell (John Carradine). With no home and winter approaching, the Martins accept work on the farm of wealthy widow Mrs. McKlennar (Edna May Oliver).

Life returns to peaceful normality; Mrs. McKlennar and the Martins prosper. However, an attack by Tories and Indians threatens the valley, and the militia is called up. Ill-equipped and poorly trained, the settlers barely manage to defeat the enemy at Oriskany. Gil returns home wounded and delirious. Lana is again pregnant, and while Gil recovers from his wounds, she gives birth to their son.

The Tories and Mohawks attack German Flatts, and the settlers take refuge in Fort Herkimer.[1] Mrs. McKlennar is mortally wounded, and ammunition runs short. Gil makes a dash through enemy lines to secure help from nearby Fort Dayton. As the Indians scale the walls of the fort, reinforcements arrive from Fort Dayton. The Indians are overwhelmed. After the battle, the settlers learn the revolution has ended, and the American flag is unfurled above the fort.

Differences between film and novel

Of dramatic necessity, the film omits or neglects many of the book's characters and incidents, including the major plotline of John Weaver and Mary Reall. A notable variance from the novel's plot to film is the assignment of the "run" to Gil Martin, rather than to Adam Hartman, who appeared in the novel as the historical figure Adam Helmer, the frontiersman who executed the run in history. The Tory leader Caldwell is patterned after William Caldwell, who unlike in the dramatization, survived the conflict for another fifty years, and plays a far more prominent role than he did in the novel, where Walter Butler is the primary Tory figure. Many characters in the film, including Mrs. McKlennar, Christian Reall, Mrs. Demooth, and Joe Boleo, have fates diametrically opposite those of the novel. Boleo in particular, portrayed as a half-wit by Ford's brother Francis, is an important personage and godfather to Gil's second son. His fate in the film adaptation is that of a much more minor character in the novel.

Ford uses broad plot elements lifted from the novel to construct his story, but the film varies greatly in detail, tone, and focus from the novel. The personalities of many prominent characters are altered, and his plot compresses numerous events to fit within the time frame. While both film and novel focus on the development of Lana as a wife, in the novel she is the 18-year-old bride of a husband she has seen just six times. Colbert was twice that age when the movie was filmed, and her selection over Nancy Kelly to portray Lana leads to a complete rebuilding of the character, from a Mohawk Valley farm girl already experienced in hard work to a soft member of the gentry whose upbringing, not youth, is the source of her initial weakness and fears. Her family is actually killed in a raid in the novel.

In an early film scene, numerous neighbors and their families help Gil clear his land as a social event, then are forced to flee for their lives from a raid by "eight white men and a hundred Indians". The Martin cabin is burned and they lose everything. In the novel, Gil clears his own land, having only three neighbors, and while burning logs with two of them to clear the remaining trees, is forced to evacuate the pregnant Lana and their belongings by a raid of eight white men and six Indians. All four farms are burned out, as are two abandoned Tory houses in retaliation. This exaggeration by Ford typifies the heroic myth he seeks to create, whereas novelist Edmonds concentrated on depicting the everyday lives and relationships of the often less-than-heroic settlers, and the changes forced on their lives by an endless and baffling crisis. Unlike Edmonds, Ford uses humor throughout the script to establish a sympathetic quaintness and community at wide variance from the novel's theme. Moreover, in the novel the first major crisis in their marriage is neither Lana's fear of the frontier nor loss of their home, but the psychological trauma of miscarrying, which Ford totally ignores.

The Battle of Oriskany is a prominent part of Edmonds' novel but is not shown in the film. Ford planned to devote three weeks to filming the battle, but weather difficulties made following the shooting schedule impossible. Instead, he improvised the memorable scene in which Gil vividly describes the battle after returning to the McKlennar home. 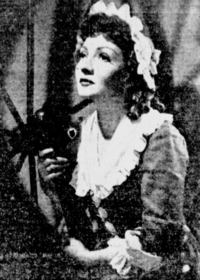 Frank S. Nugent reviewed the film for the New York Times of November 4, 1939 and wrote, "Walter D. Edmonds's exciting novel of the Mohawk Valley during the American Revolution has come to the...screen in a considerably elided, but still basically faithful, film edition bearing the trademark of Director John Ford...It is romantic enough for any adventure-story lover. It has its humor, its sentiment, its full complement of blood and thunder...a first-rate historical film, as rich atmospherically as it is in action...Mr. Fonda and Miss Colbert have done rather nicely with the Gil and Lana Martin...Miss Oliver could not have been bettered as the warlike Widow McKlennar...Mr. Shields's Rev. Rosenkrantz...Mr. Imhof's General Herkimer, Mr. Collins's Christian Reall, Spencer Charters's landlord, Ward Bond's Adam Helmer...They've matched the background excellently, all of them."[2]