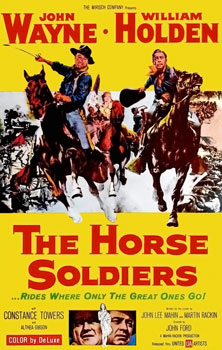 "The Horse Soldiers" is a 1959 , set in the , directed by John Ford, starring , and . The film was based on Harold Sinclair's novel of the same name.The team of and both wrote the screenplay and produced the movie.

The movie is based on the true story of , led by who, along with 1700 men, set out from northern Mississippi and rode several hundred miles behind enemy lines in April 1863 to cut the railroad between Newton's Station and . Grierson's raid was part of the Union campaign, culminating in the . The raid was as successful as it was daring, and remarkably bloodless. By attacking the Confederate-controlled railroad it upset the plans and troop deployments of Confederate General .

A Union brigade, led by Colonel John Marlowe (), is sent on a raid behind Confederate lines to destroy a railroad and supply depot at Newton Station. Ironically, before the war, Marlowe had been a railroad building engineer. With the troop is a new regimental surgeon, Major Henry Kendall (William Holden) who seems to be constantly at odds with his commander. Kendall is torn between the duty and the horror of war.

Then to complicate matters, after the unit rests at Greenbriar Plantation, Miss Hannah Hunter (Constance Towers), the plantation's mistress, eavesdrops on the colonel's plans. So to protect the mission, Marlowe is forced to drag her along. Initially hostile to her Yankee captor, Miss Hunter gradually warms to him.

"The Horse Soldiers" was filmed on location in and in and around , . John Ford cut the film's climactic battle scene ending short when Fred Kennedy, a veteran stuntman and bit player, was killed in a horse fall. Ford was so upset he closed the set and had to film the rest of the scene later in the . The scene with the fatal fall remains in the film.