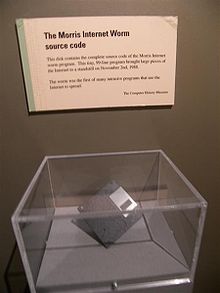 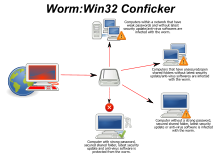 A computer worm is a self-replicating malware computer program, which uses a computer network to send copies of itself to other nodes (computers on the network) and it may do so without any user intervention. This is due to security shortcomings on the target computer. Unlike a computer virus, it does not need to attach itself to an existing program. Worms almost always cause at least some harm to the network, even if only by consuming bandwidth, whereas viruses almost always corrupt or modify files on a targeted computer.

Many worms that have been created are only designed to spread, and don't attempt to alter the systems they pass through. However, as the Morris worm and Mydoom showed, even these "payload free" worms can cause major disruption by increasing network traffic and other unintended effects. A "payload" is code in the worm designed to do more than spread the worm–it might delete files on a host system (e.g., the ExploreZip worm), encrypt files in a cryptoviral extortion attack, or send documents via e-mail. A very common payload for worms is to install a backdoor in the infected computer to allow the creation of a "zombie" computer under control of the worm author. Networks of such machines are often referred to as botnets and are very commonly used by spam senders for sending junk email or to cloak their website's address.[1] Spammers are therefore thought to be a source of funding for the creation of such worms,[2][3] and the worm writers have been caught selling lists of IP addresses of infected machines.[4] Others try to blackmail companies with threatened DoS attacks.[5]

Backdoors can be exploited by other malware, including worms. Examples include Doomjuice, which spreads better using the backdoor opened by Mydoom, and at least one instance of malware taking advantage of the rootkit and backdoor installed by the Sony/BMG DRM software utilized by millions of music CDs prior to late 2005.[dubious – discuss]

Beginning with the very first research into worms at Xerox PARC, there have been attempts to create useful worms. The Nachi family of worms, for example, tried to download and install patches from Microsoft's website to fix vulnerabilities in the host system–by exploiting those same vulnerabilities. In practice, although this may have made these systems more secure, it generated considerable network traffic, rebooted the machine in the course of patching it, and did its work without the consent of the computer's owner or user.

Some worms, such as XSS worms, have been written for research to determine the factors of how worms spread, such as social activity and change in user behavior, while other worms are little more than a prank, such as one that sends the popular image macro of an owl with the phrase "O RLY?" to a print queue in the infected computer. Another research proposed what seems to be the first computer worm that operates on the second layer of the OSI model (Data link Layer), it utilizes topology information such as Content-addressable memory (CAM) tables and Spanning Tree information stored in switches to propagate and probe for vulnerable nodes until the enterprise network is covered.[6]

Most security experts regard all worms as malware, whatever their payload or their writers' intentions.

Worms spread by exploiting vulnerabilities in operating systems. Vendors with security problems supply regular security updates[7] (see "Patch Tuesday"), and if these are installed to a machine then the majority of worms are unable to spread to it. If a vulnerability is disclosed before the security patch released by the vendor, a Zero-day attack is possible.

Users need to be wary of opening unexpected email,[8] and should not run attached files or programs, or visit web sites that are linked to such emails. However, as with the ILOVEYOU worm, and with the increased growth and efficiency of phishing attacks, it remains possible to trick the end-user into running a malicious code.

Anti-virus and anti-spyware software are helpful, but must be kept up-to-date with new pattern files at least every few days. The use of a firewall is also recommended.

In the April–June, 2008, issue of IEEE Transactions on Dependable and Secure Computing, computer scientists describe a potential new way to combat internet worms. The researchers discovered how to contain the kind of worm that scans the Internet randomly, looking for vulnerable hosts to infect. They found that the key is for software to monitor the number of scans that machines on a network sends out. When a machine starts sending out too many scans, it is a sign that it has been infected, allowing administrators to take it off line and check it for viruses.[9][10]. In addition, machine learning techniques can be used to detect new worms, by analyzing the behavior of the suspected computer. [11]

The actual term "worm"' was first used in John Brunner's 1975 novel, The Shockwave Rider. In that novel, Nichlas Haflinger designs and sets off a data-gathering worm in an act of revenge against the powerful men who run a national electronic information web that induces mass conformity. "You have the biggest-ever worm loose in the net, and it automatically sabotages any attempt to monitor it... There's never been a worm with that tough a head or that long a tail!"[12]

On November 2, 1988, Robert Tappan Morris, a Cornell University computer science graduate student, unleashed what became known as the Morris worm, disrupting perhaps 10% of the computers then on the Internet[13][14] and prompting the formation of the CERT Coordination Center[15] and Phage mailing list.[16] Morris himself became the first person tried and convicted under the 1986 Computer Fraud and Abuse Act.[17]