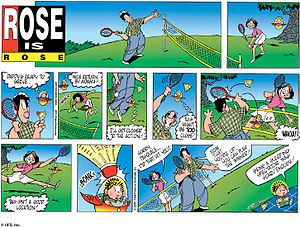 Rose Is Rose is a syndicated comic strip, written by Pat Brady since its creation in 1984, and drawn since March 2004 by Don Wimmer. The strip revolves around Rose and Jimbo Gumbo, their son Pasquale, and the family cat Peekaboo. Rose and Jimbo are deeply in love with each other, sometimes exchanging love notes or kissing under the stars, and doting fondly on Pasquale.

Rose is Rose is unusual, especially in modern comic strips, in that it has a generally positive and cheerful outlook on life and deals heavily with the emotional states of its characters, especially Rose and Pasquale. Rose and sometimes Jimbo are drawn as little children to emphasize "inner child" experiences. Rose is sometimes shown leaning against her "let it be" tree when dealing with heavy burdens. The strip also features highly daring "camera angles" and perspectives, often giving the illusion through frames of real motion.

Like Calvin and Hobbes, the strip often shows an alternate point of view based on the characters' fantasies. Rose often sees herself as a biker chick when faced with a conflict between selfish desire and social obligations, or when confronted with challenges to her usually mild-mannered personality. On the rare occasions when she and Jimbo are fighting, she usually sees herself locked away as a prisoner in a "dungeon of resentment." Jimbo, who would like his wife to gain weight, sometimes fantasizes about her being plump and round-faced. Pasquale's "dream ship" sequences get much play, as does his relationship with his beloved guardian angel or the bathtub's dreaded drain monster. Even Peekaboo has elaborate fantasies.

From the comic's debut in 1984 until the strip published on 9 August 1991, the character of Pasquale spoke only in a 'phonetic baby talk.' Since then, all of the characters except one have been portrayed as speaking coherent English.

The comic is distributed by United Features Syndicate. As of 2005, Pat Brady has been nominated eight times for a Reuben Award by the National Cartoonists Society for Outstanding Cartoonist of the Year. He won the 2004 award in that category for the first time. The strip has also won the Religious Public Relations Council's Wilbur Award for Editorial Cartoon/Comic Strips.