Miffy is a small female rabbit in a series of picture books drawn and written by Dutch artist Dick Bruna. Miffy's original Dutch name is Nijntje [ˈnɛɪ̯ncə] which stems from a toddler's pronunciation of the word "konijntje" meaning "little rabbit".

The first Miffy book was produced in 1955, and almost 30 others have followed. In total they have sold over 85 million copies, and inspired a television series as well as items such as clothes and toys featuring the character.

Miffy was created in 1955 after Bruna had been telling his one-year-old son Sierk stories about a little rabbit they had seen earlier in the dunes,[1] while on holiday at Egmond aan Zee. Miffy became a female after Bruna decided that he wanted to draw a dress and not trousers on his rabbit. Depending on the story, Miffy can be a baby or four years old.

At first Miffy looked like a toy animal, with floppy ears, but by 1963 she looked the way we see Miffy today. Miffy is drawn in a minimalist style, requiring only a few lines and one or two primary colors. There are some colors that are never used, and Bruna can be picky about a certain shade of color, brown and grey for example, and will search for it until he is happy. Even though the things that he draws are not realistic, they are instantly recognisable, and Miffy is obviously a rabbit.

There are now almost 30 titles for Miffy, and many more for the other characters. Bruna has produced almost 100 books.

The Miffy books each contain sixteen pages of story. Each page has one illustration and four lines of verse, the last word of the second line rhymes with the last of the fourth. They are written about things that children can understand, and situations they will face such as going to the hospital and going to school, and they always have a happy ending. Some books have no text at all, such as Miffy's Dream

The books are printed in small format. Bruna considers it important that his audience feels that his books are there for them, not for their parents. Most Miffy books have an advisory reading level of age 4 to 8 years.

Bruna's books have now been translated into 40 different languages, and over 85 million copies have been sold all over the world.[2] He has won many awards for his books, such as the Golden Brush in 1990 for Boris Bear and the Silver Brush for Miffy In The Tent in 1996. In 1997 he was awarded the Silver Slate for Dear Grandma Bunny, a book where Miffy's Grandmother was sick and died.

The other characters that appear in the books are her family: Miffy's parents, her Grandma and Grandpa, Aunt Alice, and her Uncle Bob, who appears in Miffy Goes Flying. A new brother or sister for Miffy is introduced in Miffy And The New Baby. She also has many friends, Boris and Barbara Bear, who first appeared in 1989 and are boyfriend and girlfriend, Poppy Pig, who appeared in 1977, and her niece Grunty, Snuffy, who appeared in 1969, and other bunnies such as Aggie and Melanie.

Miffy was designed as a children's book character, but the design is now used on many other things like clothes, stationery, toys, glasses, household items etc.

In the early 1990s an image of Miffy holding an adjustable spanner coyly behind her back appeared on flyers produced by people taking direct action against the UK government's road building program. This unauthorised use of the character spread[3] and Miffy became a mascot for groups involved in radical ecological direct action. 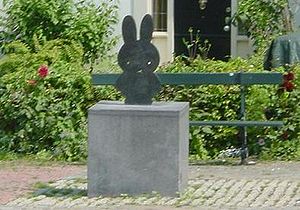 Miffy statue at the Nijntjepleintje ('little Nijntje square') in Utrecht, the Netherlands.

Miffy has been appearing on TV since 2003, in a show named after her that airs on children's television channels such as Treehouse in Canada and Nick Jr. in the U.S. from April 7, 2003 through April 1, 2007. Miffy and Friends moved to public television. The show adds several new characters such as Melanie's African family, as well as the family of Boris' and Barbara's common cousin, Umik. On public television, Miffy & Friends was sponsored by Nestle Milky Bar. It is very likely animated by the use of mostly stiff-jointed plastic forms, covered with thick vinyl faces and torsos, accented with cloth and clay- following the minimalistic Bruna hallmark. The TV series was produced by Pedri Animation BV,[4] a Dutch stop-motion animation company. It is voiced simply by a feminine storytelling narrator.

Many think that Miffy is Japanese, because Sanrio's Hello Kitty and friends are rendered using a similar line style. In addition, the Miffy brand is popular in Japan and there is a lot of Japanese-made Miffy merchandise. In an interview for the British paper The Daily Telegraph, Bruna expressed his dislike for Hello Kitty. "'That,' he says darkly, 'is a copy [of Miffy], I think. I don't like that at all. I always think, "No, don't do that. Try to make something that you think of yourself".[2]

On August 26, 2010, Mercis BV, representing Bruna, brought suit against Sanrio with the claim that one of Hello Kitty's companion characters, a rabbit named Cathy, infringes on the copyright and trademark of Miffy.[5] On November 2, 2010, a Dutch court ruled against Sanrio and ordered the company to stop marketing Cathy products in Belgium, Luxembourg, and the Netherlands.[5][6][7] Following the March 11, 2011 earthquake and tsunami in Japan, Sanrio and Mercis reached an out-of-court settlement on June 7, 2011 for Sanrio to halt production worldwide of merchandise that feature Cathy. Instead of continuing the court battle, the two companies will donate the legal fees to help the earthquake victims.[8][9]

In Bruna's hometown, Utrecht, there is a square named after Nijntje, the Nijntjepleintje (lit: Little Nijntje Square, to retain the rhyme) and in 2006, the Centraal Museum opened a permanent exhibition, the dick bruna huis (Dick Bruna house).[10]

Miffy celebrated her fiftieth birthday in 2005. This has been celebrated in cities across the globe, for example in the Manchester Art Gallery in England. She also serves a "celebrity character spokesperson" for Unicef.[11]

In October 2010, an educational title for WiiWare called miffy's world was released in Europe.[12]

Miffy and Friends is a claymation series based on the character. It was first shown in the United States on Nick Jr. from April 2003 to April 2007 (see History) and later re-aired on PBS Kids. It also aired in Canada on Treehouse TV. The show is currently airing on WNET-TV as part of its' educational children's programming lineup. Miffy the Artist is published in association with the Tate Gallery, London.