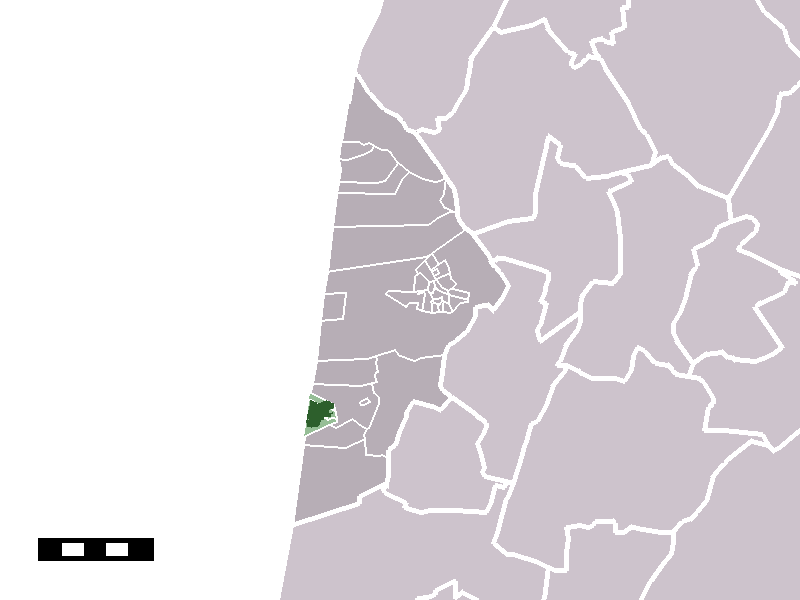 caption = The town centre (darkgreen) and the statistical district (lightgreen) of Egmond aan Zee in the municipality of Bergen (NH.).

Egmond aan Zee was a separate municipality until 1978, when it merged with to form the new municipality Egmond. In turn, Egmond was amalgamated into Bergen on January 1, 2001. [Ad van der Meer and Onno Boonstra, "Repertorium van Nederlandse gemeenten", KNAW, 2006. [http://www.knaw.nl/cfdata/publicaties/detail.cfm?boeken__ordernr=20061061] ]

This best-known of the three villages of Egmond was formed in 977 in the coastal dunes. Settlers in this area have battled the sea since the first settlements. During the All Saints' Flood of 1570, some 50 houses disappeared into the sea. And in November 1741, 36 houses and the church and its tower were swallowed by the sea.

Apart from being dangerous, the sea also gave the people of Egmond food and work, as most inhabitants of Egmond were fishermen. Quite a few sights in Egmond remind one of this; for instance, the "fishermen-houses", which are tiny houses near the sea where fishermen used to live. Another sight is a fishermen monument and the "Prins Hendrik Stichting", a stately building named after a Dutch prince that used to house retired fishermen. The Egmond museum paints a picture of what living in Egmond used to be like.

Egmond aan Zee has been a popular seaside resort since the beginning of the 20th century, when it was well known for its healthy and clear sea air. Children came over to stay in one of the many "koloniehuizen" (colony houses), which were sanatorium-like institutions often run by charities and churches. The centre of attention in Egmond is certainly the Jan van Speijk Lighthouse, built in 1834 and named after Dutch sea captain .