Our Lady of Prompt Succor

Our Lady of Prompt Succor 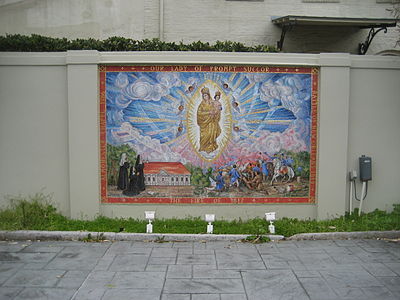 Our Lady of Prompt Succor is a religious title given to the Blessed Virgin Mary, the mother of Jesus, by the Roman Catholic Church. It refers to a statue of the Madonna kept in a shrine in New Orleans, Louisiana, United States. She is also known as Notre-Dame de Bon Secours. She is the principal patroness of the state of Louisiana, the Archdiocese of New Orleans, and the city of New Orleans. Her feast day is celebrated on January 8.

French Ursuline nuns were the first to arrive in Louisiana. Establishing a convent in 1727, the nuns founded what is the oldest school for girls in the territory of the modern-day U.S., Ursuline Academy, which educated the children of European colonist, Native Americans, and those of the local Creole people, slave or free. Spanish sisters came to assist the growing school in 1763 after Louisiana fell under Spanish control. In 1800 the territory came back under French possession, and most sisters, fearing the anti-clerical sentiment of the French Revolution, fled to Havana, Cuba.

Coming short on teachers, Mother Saint Andre Madier requested sisters from France to come to America to aid the struggling convent in 1803. She wrote to her cousin, Mother Saint Michel Gensoul, who was running a Catholic girls boarding school in France at the time. The Catholic Church was suffering the wrath of the revolution under Napoleon. Mother Saint Michel, knowing that the Church was in distress in both her homeland and abroad, was prompted by the Holy Spirit to approach Bishop Fournier of Montpelier to request the transfer. Bishop Fournier felt unable to afford the loss of another nun, as many had been killed or fled during the revolution. Bishop Fournier responded to Mother St. Michel, "The Pope alone can give this authorization. The Pope alone!"

Mother St. Michel arrived in New Orleans with the statue of Our Lady of Prompt Succor on December 31, 1810 with several postulatants. The statue was placed in the monastery chapel and is venerated by the people of New Orleans.

Many miracles have been attributed to the intercession of the Blessed Virgin Mary under the title of Our Lady of Prompt Succor. Two historical events are especially associated with the Virgin. The first occurred during the eruption of a great fire in New Orleans devastating the Vieux Carré. The Ursuline convent was facing imminent destruction as the winds blew the terrible fire toward Jackson Square. An order was given to evacuate the convent, however at that moment, a nun named Sr. Anthony placed a small statue of Our Lady of Prompt Succor on a window seat and Mother St. Michel began to pray aloud, "Our Lady of Prompt Succor, we are lost unless you hasten to our aid!" Immediately, the wind shifted direction, blowing the flames away from the convent allowing for the fire to be extinguished.[citation needed] The Ursuline convent was one of the few buildings spared from destruction. Upon seeing the inexplicable occurrence, witnesses unanimously cried out, "Our Lady of Prompt Succor has saved us!"

The second major miracle occurred in 1815, thirty years after the disastrous fire. General Andrew Jackson was facing the British in the Battle of New Orleans. There were 15,000 British Troops against 6,000 American troops. It seemed as though the city of New Orleans was doomed. Knowing the terrible fate of the city of New Orleans the Ursuline nuns along with many faithful people of New Orleans gathered in the Ursuline chapel before the statue of Our Lady. They spent the night before the battle praying and crying before the holy statue, begging for the Virgin Mary's intercession. On the morning of January 8, the Very Rev. William Dubourg, Vicar General, offered Mass at the altar on which the statue of Our Lady of Prompt Succor had been placed. The Prioress of the Ursuline convent, Mother Ste. Marie Olivier de Vezin, made a vow to have a Mass of Thanksgiving sung annually should the American forces win. At the very moment of communion, a courier ran into the chapel to inform all those present that the British had been defeated.[citation needed] General Jackson went to the convent himself to thank the nuns for their prayers: "By the blessing of heaven, directing the valor of the troops under my command, one of the most brilliant victories in the annals of war was obtained."[citation needed] The vow made by Mother Ste. Marie has been faithfully kept throughout the years.

It is customary for the citizens of New Orleans to pray before the statue of Our Lady of Prompt Succor, asking for her intercession whenever a hurricane threatens the city, reciting the prayer:

Our Lady of Prompt Succor, Hasten to Help Us!