A striking feature of projective planes is the "symmetry" of the roles played by points and lines in the definitions and theorems, and (plane) duality is the formalization of this metamathematical concept. There are two approaches to the subject of duality, one through language (the Principle of Duality) and the other a more functional approach. These are completely equivalent and either treatment has as its starting point the axiomatic version of the geometries under consideration. In the functional approach there is a map between related geometries which is called a duality. In specific examples, such a map can be constructed in many ways. The concept of plane duality readily extends to space duality and beyond that to duality in any finite dimensional projective geometry.

For more details on this topic, see Incidence structure#Dual structure.

If one defines a projective plane axiomatically as an incidence structure, in terms of a set P of points, a set L of lines, and an incidence relation I that determines which points lie on which lines, then one may define a plane dual structure.

Interchange the role of "points" and "lines" in

to obtain the dual structure

where I* is the inverse relation of I. C* is also a projective plane, called the dual plane of C.

If C and C* are isomorphic, then C is called self-dual. The projective planes PG(2,K) for any division ring K are self-dual. However, there are non-Desarguesian planes which are not self-dual, such as the Hall planes and some that are, such as the Hughes planes.

The Principle of Plane Duality says that dualizing any theorem in a self-dual projective plane C produces another theorem valid in C.

The above concepts can be generalized to talk about space duality, where the terms "points" and "planes" are interchanged (and lines remain lines). This leads to the Principle of Space Duality. Further generalization is possible (see below).

These principles provide a good reason for preferring to use a "symmetric" term for the incidence relation. Thus instead of saying "a point lies on a line" one should say "a point is incident with a line" since dualizing the latter only involves interchanging point and line ("a line is incident with a point").

As the real projective plane, PG(2,R), is self-dual there are a number of pairs of well known results that are duals of each other. Some of these are:

Duality as a mapping

A correlation of order two (an involution) is called a polarity. If a correlation φ is not a polarity then φ2 is a nontrivial collineation.

This duality mapping concept can also be extended to higher dimensional spaces so the modifier "(plane)" can be dropped in those situations.

When a vector u is used to define a hyperplane in this way it shall be denoted by uH, while if it is designating a point we will use uP. In terms of the usual dot product, Hu = {xP : uH • xP = 0}. Since K is a field, the dot product is symmetrical, meaning uH•xP = u0x0 + u1x1 + ... + unxn = x0u0 + x1u1 + ... + xnun = xH•uP. A reciprocity can be given by uP ↔ Hu between points and hyperplanes. This extends to a reciprocity between the line generated by two points and the intersection of two such hyperplanes, and so forth.

Geometric construction of a reciprocity 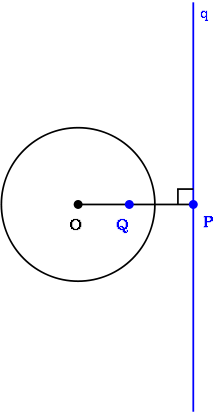 In the Euclidean plane, fix a circle C with center O and radius r. For each point P other than O define an image point P' so that OP • OP' = r2. The mapping defined by P → P' is called inversion with respect to circle C. The line through P' which is perpendicular to the line OP is called the polar of the point P with respect to circle C. Let m be a line not passing through O. Drop a perpendicular from O to m, meeting m at the point Q (this is the point of m that is closest to O). The image of Q under inversion with respect to C is called the pole of m. If a point P (different from O) is on a line m (not passing through O) then the pole of m lies on the polar of P and viceversa. The incidence preserving process, in which points and lines are transformed into their polars and poles with respect to C is called reciprocation.[5] In order to turn this process into a reciprocity, the Euclidean plane (which is not a projective plane) needs to be expanded to the extended euclidean plane by adding a line at infinity and points at infinity which lie on this line. In this expanded plane, we define the polar of the point O to be the line at infinity (and O is the pole of the line at infinity), and the poles of the lines through O are the points of infinity where, if a line has slope s (≠ 0) its pole is the infinite point associated to the parallel class of lines with slope -1/s. The pole of the x-axis is the point of infinity of the vertical lines and the pole of the y-axis is the point of infinity of the horizontal lines.

The construction of a reciprocity based on inversion in a circle given above can be generalized by using inversion in a conic section (in the extended real plane). The reciprocities constructed in this manner are projective correlations of order two, that is, polarities.

Mapping the sphere onto the plane

The unit sphere modulo −1 model of the projective plane is isomorphic (w.r.t. incidence properties) to the planar model: the affine plane extended with a projective line at infinity.

are expressed in homogeneous coordinates, then

As we have seen, any great circle in the unit sphere has a projective point perpendicular to it, which can be defined as its dual. But this point is a pair of antipodal points on the unit sphere, through both of which passes a unique 3-D line, and this line extended past the unit sphere intersects the tangent plane at a point, which means that there is a geometric way to associate a unique point on the plane to every line on the plane, such that the point is the dual of the line.

Given a line L in the projective plane, what is its dual point? Draw a line L′ passing through the 2-D origin and perpendicular to line L. Then pick a point P on line L′ on the other side of the origin from line L, such that the distance of point P to the origin is the reciprocal of the distance of line L to the origin.

Figure 1. Three pairs of dual points and lines: one red pair, one yellow pair,
and one blue pair. The duality is an isomorphism of incidence, so that, e.g.,
the line passing through the red and yellow points is dual to the intersection
of the red and yellow lines.

Expressed algebraically, let g be a one-to-one mapping from the projective plane onto itself:

where the L subscript is used to semantically distinguish line coordinates from point coordinates. In words, affine line (m, b) with slope m and y-intercept b is the dual of point (m/b, −1/b). If b=0 then the line passes through the 2-D origin and its dual is the ideal point [m : −1 : 0].

If a point or a line's homogeneous coordinates are represented as a vector in 3x1 matrix form, then the duality mapping g can be represented by a 3x3 matrix

The duality mapping g is an isomorphism with respect to the incidence properties (such as collinearity and concurrency). The mapping g has this property: given a pair of lines L1 and L2 which intersect at a point P, then their dual points gL1 and gL2 define the unique line g−1P:

Given a pair of affine points in homogeneous coordinates, the line passing through them is

where the cross product is computed just as it would for an ordinary pair vectors in 3-space.

From this last equation can be derived the intersection of lines, by using the mapping g to "plug in" the lines into the slots for points:

where mapping g is seen to distribute with respect to the cross product: i.e. g is an isomorphism of cross product.