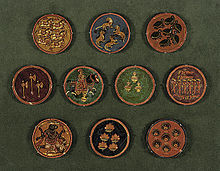 Ganjifa, or Gânjaphâ, is a card game that originated in Persia and became popular in India under the Mughal emperors in the 16th century.

The name Ganjifa comes from the Persian word ganjifeh (گنجفه), meaning playing card. The first known reference is in an early-16th century biography of Bâbur, the founder of the Mughal dynasty. The game first became popular at court, in the form of lavish sets of precious stone-inlaid ivory or tortoise shell (darbar kalam). It later spread to the general public, whereupon cheaper sets (bazâr kalam) would be made from materials such as wood, palm leaf, or pasteboard.

Ganjifa cards are circular and traditionally hand-made by local artisans. The suits are composed of twelve subjects on coloured backgrounds, with pip cards running from 1 to 10, and two court cards, one of a minister or counselor, the other of a king. The precise style and arrangement of the decoration on any set is dependent on its artist. The designs of the cards of Dashavatara Ganjifa use motifs from the ten Avatars of Vishnu.

In 1895, General Albert Houtum-Schindler described Ganjifa with the following comments:

"The word ganjifeh is in Persian now only employed for European playing-cards (four suits, ace to ten; three picture cards each suit), which, however, are also called rarak i âs - rarak i âsanâs - or simply âs, from the game âs or âsanâs. From travellers to Persia in the seventeenth century we know that a set of ganjifeh consisted of ninety or ninety-six cards in eight suits or colors. At present a set consists of twenty cards in five colors or values. These values are:

The backs of the cards are always black or of a dark color, but their faces have grounds of different colors, viz: The Lion and Sun, a black ground; the King, a white ground; the Lady, red; the soldier, gold; the Lakat, green. The pictures on the cards show much variety and are often obscene, particularly those on the card of the lowest value. The ordinary types as now made are: Ace, a Lion and Sun, as in the Persian arms; a King sitting on a throne; a European lady in a quaint costume; a Persian soldier shouldering his rifle; a Persian dancing-girl."

Houtum-Schindler described the rules as follows:

"The word ganjifeh I have explained. Âs is no doubt our word "ace", probably introduced into India through the Portuguese. Neither of the words is found in Persian dictionaries. The game of As is exactly like Poker, but without any flushes or sequences. There are four players, and each player gets five cards, dealt to the right. The dealer puts down a stake. The first player then looks at his cards. If he "goes", he says dîdam (I have seen), and covers the stake or raises it. If he does not wish to play, he says nadîdam, (I have not seen) and throws his cards. He may also "go" without looking at his cards - that is, in poker parlance, "straddle" - and says nadîd dîdam (not seeing, I have seen). The second player, if he wishes to play, must cover the stakes, and can also raise. The third player and the dealer then act in the same way just as in poker, and when the stakes of all players are equal and no one raises any more the cards are turned up and the player holding the best hand wins the stakes.

The hands in the order of their value are as follows:

When two players have the same pair or pairs, the other cards decide; for instance, a pair of kings, ace, soldier, and lakat.

"Bluffing" is a feature of the game and is called tûp zadan, literally "fire off a gun". A bluff is tûp."