John Nicholas 'Dick' Foran (June 18, 1910 – August 10, 1979) was an American actor, known for his performances in western musicals and for playing supporting roles in dramatic pictures.

Foran was born in Flemington, New Jersey, the first of five sons to Arthur F. and Elizabeth Foran. His father Arthur F. Foran would go on to serve in the New Jersey Senate, as would his younger brother, Walter E. Foran. Foran was a bright student while growing up, a good athlete in high school with a fine singing voice and often sang in the church choir. After graduation he attended the Hun School, a college preparatory school in nearby Princeton, and then enrolled at Princeton University pursuing a degree in geology. He played on the football team while taking courses in the arts where he develop an interest in the theater.

Foran studied music at the Leibling Studio in New York before singing on radio. After becoming a lead singer in a band and later forming his own orchestra, Foran was hired by Warner Bros. as a supporting actor (he was six feet two, with red hair). He would also croon when called upon in films such as Change of Heart (1934) with Janet Gaynor made for Fox Film Corporation. His handsome appearance and good natured personality made him a natural choice for the supporting cast. He first appeared as a singing cowboy in his first starring role in Moonlight on the Prairie (1935). Other singing cowboy features included Song of the Saddle (1936), Guns of the Pecos (1937), Empty Holsters (1937) and Cowboy from Brooklyn (1938).[1]

In 1938, Foran moved to Universal Studios and acted in many different genres of film from horror to comedies with Abbott and Costello such as Ride 'Em Cowboy (1942).[1] 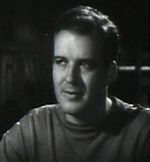 He appeared in at least four episodes of Science Fiction Theatre (1955). One of these, "The Miracle Hour" (aired December 22, 1956), is about a man who never gives up hope that his fiancee's blind six-year-old son won't have to spend the holidays in darkness. The show featured Jean Byron as the fiancee and Charles Herbert as the child. He appeared three times (1955–1956) as Father Brophy on the ABC anthology series, Crossroads. He also guest starred as a lawman in the episode "The Third Rider" in the first season (1957) of the ABC western series Maverick, with Jack Kelly.

Throughout his career, he starred in The Petrified Forest (1936), The Sisters (1938), Rangers of Fortune (1940), The Mummy's Hand (1940), and Keep 'Em Flying (1941). In 1954, Foran guest starred on NBC's Justice, a legal drama starring Dane Clark and Gary Merrill, on CBS's The Public Defender starring Reed Hadley and Hugh Beaumont, and on NBC's The Martha Raye Show, a comedy/variety show starring comedienne Martha Raye.

One of his last movie roles was a small one in Donovan's Reef (1963), starring his long-time friend John Wayne. His final film appearance was as the prospector "Old Timer" in the sentimental film, Brighty of the Grand Canyon (1967) with Joseph Cotten, Pat Conway, and Karl Swenson.

Foran has a star on the Hollywood Walk of Fame. He is buried in San Fernando Mission Cemetery.