On 7 January, 1905, she married a wealthy American, Jerome Stonborough (1873 -June 1938, suicide). Of German Jewish ancestry and born Jerome Herman Steinberger, he had had his name changed to Stonborough in 1900. He was also an art collector. They were close friends with Hermann Rothe, Margaret was the godmother of his daughter Margarethe. The couple had two sons and divorced in 1923.

After the First World War, Stonborough-Wittgenstein was appointed by the American Relief Administrator Herbert Hoover (later president of the United States) as special representative of the American Relief Program for Austria. When working in juvenile prisons as a psychotherapy adviser, she came into contact with Sigmund Freud and was analyzed by him during two years. They remained in contact until Freud's death. 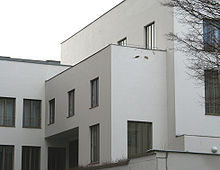 In 1926, she commissioned her brother Ludwig and the architect Paul Engelmann to design and build Haus Wittgenstein in Vienna. Sold by her son Thomas in 1968, this noted building still stands today, and now houses the Bulgarian Cultural Institute. In 1940, she emigrated to the USA, but returned to Austria after the war and obtained restitution of part of her wealth which had been confiscated by the Nazis.