The Pride of Oklahoma Marching Band

The Pride of Oklahoma Marching Band

The Pride of Oklahoma Marching Band, known as "The Pride", is the student marching band for the University of Oklahoma Sooners. 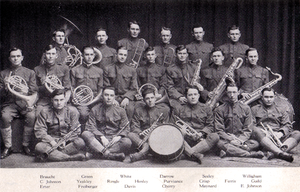 The Pride was founded in 1901 as a pep band to play at Sooner football games. In the early years, the band was composed mostly of Norman residents and was disbanded every year after football season.

The first continuous student band was founded in 1904 by Lloyd Curtis, himself a Sooner freshman. The band branched out and began playing at other athletic events. Eventually, they started playing non-athletic events also, including concerts and parades. The band marched in the parade celebrating the inauguration of the first Oklahoma governor, Charles N. Haskell. A military band was created during World War I but was kept separate from the University band.

In 1929, the University hired its first full-time faculty member, William R. Wehrend, whose primary responsibility was to direct the band program. He devised numerous ways of promoting the band. He was one of the first band directors to have an annual high school band day event. In 1934, he organized a publicity stunt to set the record for the world's longest drum roll. Ten hours later, it was successful. Wehrend was one of the first directors to admit women into the band program, in 1934. [1] 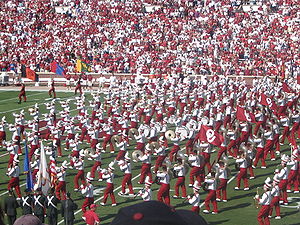 The Pride of Oklahoma Marching Band in pregame performance.

With the success of the football program in the 1950s, so increased the visibility of the Pride. Their halftime programs, centered on themes that would incorporate well-known songs of the day, were soon being broadcast on television during games. They received the grand prize as the best overall unit in the 200-unit 1961 National Cherry Blossom Festival Parade held in Washington, D.C.

Since the 1950s, the Pride has been under the leadership of several different band directors and with those directors came different styles. The 1960s saw band director Gene Braught bring a style of precision marching filled with intricate routines creating geometric shapes and lines.

Gene "Coach" Thrailkill transitioned the Pride to emphasize technique and sound – but not at the expense of the overriding goal to support the Sooners. During the 1983 Bedlam game at Oklahoma State in Stillwater, the Sooners fell behind 20-3 early in the 4th quarter. Stillwater police took Thrailkill off the field for not having a sideline pass. Incensed, Thrailkill told the Pride to "start playing and don't stop until we're ahead!" The band complied, and played "Boomer Sooner" non-stop – and after roughly 300 times, the Sooners were ahead 21-20. Barry Switzer and the Sooners awarded the Pride the game ball, and labeled it "The Day The Pride Won" as proof.[2] 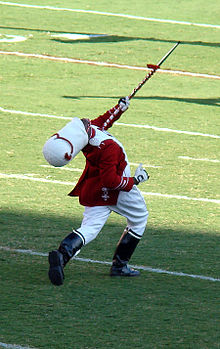 2007 Drum Major Chauvin Aaron leads the Pride during its pregame performance before the Sooners play the University of North Texas Mean Green on 2007-09-01.

Thrailkill also introduced the current pre-game performance, which has been used continuously in one form or another for over 35 years.

A Second Century of Pride

Upon Thrailkill's retirement in 2001, Brian Britt was named Pride director.

Debra Traficante, a former Graduate Assistant at the University of Oklahoma, became Assistant Director in 2010.

On November 22, 2007, six days after Oklahoma marked 100 years as an American state, the Pride made its first trip to New York City to be Oklahoma's representative in the Macy's Thanksgiving Day Parade. The band debuted a new uniform coat during the parade, and returned to Oklahoma in time to support the Sooners against the Oklahoma State Cowboys on November 24.

In attendance at all home and away football games, the Pride performs a variety of music.