Mesosaurus (meaning "middle lizard") is an extinct genus of reptile from the Early Permian of southern Africa and South America. Along with the genus Stereosternum, it is a member of the family Mesosauridae and the order Mesosauria. Mesosaurus was one of the first marine reptiles, and had many adaptations to a fully aquatic lifestyle. It is usually considered to have been anapsid, although Friedrich von Huene considered that it was synapsid[1], and this hypothesis has been revived recently[2].

Mesosaurus fossil at the Geological Museum in Copenhagen

Mesosaurus had a long skull that was larger than that of Stereosternum and had longer teeth. The teeth are angled outwards, especially those at the tips of the jaws.[3]

The bones of the postcranial skeleton are thick, having undergone pachyostosis. Mesosaurus is unusual among reptiles in that it possesses a cleithrum. A cleithrum is a type of dermal bone that overlies the scapula, and is usually found in more primitive bony fish and tetrapods. The head of the interclavicle of Mesosaurus is triangular, unlike those of other early reptiles, which are diamond-shaped.[4] 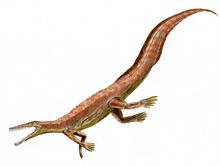 Mesosaurus was one of the first reptiles to return to the water after early tetrapods came to land in the Late Devonian or later in the Paleozoic[5]. It was around 1 metre (3.3 ft) in length, with webbed feet, a streamlined body, and a long tail that may have supported a fin. It probably propelled itself through the water with its long hind legs and flexible tail. Its body was also flexible and could easily move sideways, but it had heavily thickened ribs, which would have prevented it from twisting its body.[6]

Mesosaurus had a small skull with long jaws. The nostrils were located at the top, allowing the creature to breathe with only the upper side of its head breaking the surface, in a similar manner to a modern crocodile. The teeth were originally thought to have been straining devices for the filter feeding of planktonic organisms.[6] However, this idea was based on the assumption that the teeth of Mesosaurus were numerous and close together in the jaws. Newly examined remains of Mesosaurus show that it had fewer teeth, and that the dentition was suitable for catching small nektonic prey such as crustaceans.[3]

Early reconstruction of the skeleton of M. brasiliensis showing many small teeth in the jaws (MacGregor, 1908).[7]

The pachyostosis seen in the bones of Mesosaurus may have enabled it to reach neutral buoyancy in the upper few meters of the water column. The additional weight may have stabilized the animal at the water's surface. Alternatively, it could have given Mesosaurus greater momentum when gliding underwater. While many features suggest a wholly aquatic lifestyle[8], Mesosaurus may have been able to move onto land for short periods of time. The elbows and ankles had restricted movement, making walking impossible. It is more likely that if Mesosaurus moved onto land, it would push itself forward in a similar way to living female sea turtles when nesting on beaches.[4]

Mesosaurus was significant in providing evidence for the theory of continental drift, because its remains were found in southern Africa and eastern South America, two far away places[1]. As Mesosaurus was a coastal animal, and therefore could not have crossed the Atlantic Ocean, this distribution indicated that the two continents used to be joined together.