Department of the Treasury (Australia)

Department of the Treasury (Australia) 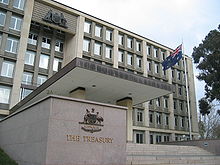 The Department of the Treasury's main offices in Canberra.

The Department of the Treasury is an Australian Government department. Its role is to focus and develop economic policy.

The Commonwealth Treasury was established in Melbourne in January 1901.[1] The department focused on developing taxation system, land and income tax and economic policies.

The department is divided into four groups, Fiscal, Macroeconomic, Revenue and Markets with support coming from the Corporate Services Division. These groups were established to meet four policy outcomes:

The Treasury monitors and assesses economic conditions and prospects, both in Australia and overseas, and provides advice on the formulation and implementation of effective macroeconomic policy.

The Treasury provides advice on policy processes and reforms that promote a secure financial system and sound corporate practices, remove impediments to competition in product and services markets and safeguard the public interest in matters such as consumer protection and foreign investment.

The Treasury provides advice and assists in the formulation and implementation of government taxation and retirement income policies and legislation as well as providing information on material changes to taxation revenue forecasts and projections.

Secretaries to the Treasury

The Secretary to the Treasury is the public service head of the department. Below is the list of Secretaries since 1960.

Treasurer Wayne Swan has previously called Henry an independent economic regulator, similar to the governor of the Reserve Bank.[2] When asked after the 2009 Budget about Treasury’s independence, Henry replied: