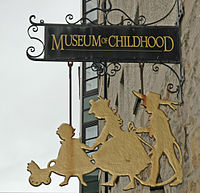 The Museum of Childhood is a collection of items relating to children's toys and playthings, situated on the Royal Mile, in Edinburgh, Scotland.

The building was once the Salvation Army's hall on the Royal Mile.

The museum is said to ring with the crying of children late at night. The building is near the site of a nursery sealed up during the plague years - with mothers and their children inside. [1]