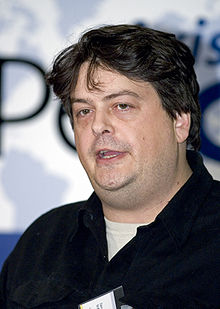 David Shayler (born 24 December 1965) is a British journalist and former MI5 (Security Service) officer.[1] Shayler earned notoriety after being prosecuted under the Official Secrets Act 1989 for his passing secret documents to the Mail on Sunday in August 1997 that alleged that MI5 was paranoid about socialists, and that it had previously investigated Labour Party ministers Peter Mandelson, Jack Straw and Harriet Harman. David Shayler's website (davidshayler.com) is no longer being maintained by him.

Shayler was born in Middlesbrough. He attended John Hampden Grammar School in High Wycombe, Buckinghamshire whose head teacher once described him as "a born rebel who sails close to the wind ... and suffers neither fools nor their arguments gladly".[2] He later attended the University of Dundee starting in 1984 where he was editor of the student newspaper Annasach and was responsible for publishing extracts of the book Spycatcher by another former MI5 officer Peter Wright (banned in England at the time).[citation needed] He graduated with a 2:1 degree in English in July 1989. After leaving university he worked as a journalist at the Sunday Times newspaper although his employment was terminated six months later.

Shayler joined MI5 in October 1991 after responding to an oblique job advertisement in the 12 May edition of The Observer entitled "Godot isn't coming" a reference to the play Waiting for Godot in which Godot never arrives. The advert asked if applicants had an interest in current affairs, had common sense and an ability to write. Believing the job was media related, Shayler applied.[citation needed]

He claims that he started work in F branch, which dealt with counter-subversion, including the monitoring of left-wing groups and activists, where he worked vetting Labour Party politicians prior to the 1992 election, later being transferred to T branch, which handled Irish terrorism, in August 1992. While at T branch he alleges that he was involved in an investigation of Sean McNulty.

Shayler moved again, to G9 branch, responsible for Middle Eastern terrorism where he allegedly headed the Libyan desk as G9A/5. It was during his tenure at the Libyan desk that he claims that he learned of the MI6 plot to assassinate Libyan leader Colonel Gaddafi from his MI6 counterpart David Watson (PT16B) and Richard Bartlett (PT16) who had overall control and responsibility for the operation.[3][4] He left the service in October 1996.

Shayler stated that MI6 had been involved in a failed assassination attack on Libyan leader Muammar al-Gaddafi in February 1996 without the permission of the then foreign secretary Sir Malcolm Rifkind. The plot involved paying the Libyan Islamic Fighting Group with supporters in London and links to Al-Qaeda £100,000 to carry out the attack.[5] The group was paid to plant a bomb underneath Gaddafi's motorcade. The attack happened in March 1996 in the coastal city of Sirte. The bomb was planted under the wrong car and failed to kill Gaddafi but did result in the deaths of several innocent civilians.[4] In November 1999 he sent a dossier of detailed evidence of this including the names of those involved to then home secretary Jack Straw who stated that he was "looking into the matter"[6] as well as Parliament's Intelligence and Security Committee and the police. In 2005, the LIFG was banned as a terrorist group in Britain.

He also stated that the intelligence services were deliberately planting stories in newspapers and the mainstream media by feeding willing journalists with misinformation, such as a November 1996 article in the Sunday Telegraph by Con Coughlin linking Colonel Gaddafi's son with a currency counterfeiting operation citing the source as a British banking official when in reality the source was MI6. This was later confirmed when Gaddafi's son served the paper with a libel writ which later admitted the true source of the information.[7]

According to Shayler the 1994 bombing of the Israeli embassy in London was known to the intelligence services before it happened, and could have been prevented.

The British government later placed an injunction on the republication of Shayler's claims although this was later lifted on 2 November 1997 allowing the paper to print his claims of how the bombing of the Israeli Embassy in London in 1994 could have been prevented if the service had acted on prior knowledge it had obtained. On 19 June 1998 he told The Spectator magazine that the security service had information that could have prevented the 1993 Bishopsgate bombing. After revealing information to the Mail on Sunday in August 1997 Shayler fled the day prior to publication, first to Utrecht in the Netherlands and then later to France with his girlfriend and former colleague Annie Machon and was arrested by French police on 1 August 1998 with an extradition warrant on the request of the British government and then held in La Santé Prison for four months under the prisoner number 269151F.[8] On 18 November 1998 the French courts decided that the British government's extradition request was politically motivated and therefore not grounds for extradition.

In 2000, Shayler appeared on Have I Got News For You via satellite. He was the subject of many jokes on the show, including when team captain Paul Merton receiving huge applause for switching off David Shayler's TV screen. 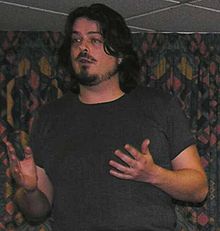 David Shayler talking at an anti-war meeting at Sheffield University

In August 2000 he voluntarily returned to the UK on condition he was not remanded in custody pending his trial. He was arrested and subsequently released on bail.

He was charged with three charges of breaching the Official Secrets Act 1989 on 21 September 2000, one charge of passing on information acquired from a telephone tap (a breach of Section Four of the Act), and two others of passing on information and documents obtained by virtue of his membership of the service (a breach of Section One of the Act).[9] The judge at the trial was Mr Justice Moses. At pre-trial hearings he ruled that Shayler had to disclose all information and argument he intended to present to the jury to the judge and prosecution beforehand.[10] At the trial Shayler represented himself, claiming that the Official Secrets Act was incompatible with the Human Rights Act and that it was not a crime to report a crime although these arguments were dismissed by the court with the latter being ruled irrelevant.[10] Shayler's defence attempted to argue that there were no other avenues to pursue his concerns with the service and its performance. The judge ruled that while this was true it was irrelevant.[11] The judge instructed the jury to return a guilty verdict and that the House of Lords had ruled in another case that a defendant could not argue that he had revealed information in the public interest. After more than three hours of deliberation the jury found him guilty.[12] In November 2002 he was sentenced to 6 months in prison, of which he served three weeks in Belmarsh prison and just under five weeks in Ford Open Prison, with the four months served on remand in France being taken into consideration, finally being released on 23 December 2002 although he was electronically tagged and under a 7pm to 7am curfew for a further seven weeks.[13]

Following the release of the 9/11 Commission Report, David Shayler joined the 9/11 Truth Movement, a movement which holds as a primary tenet the belief that the official explanation for the September 11, 2001 attacks is partly (or completely) fraudulent. The New Statesman has reported Shayler stating "no planes were involved in 9/11" and that the apparent "planes" were missiles camouflaged by holograms.[14] Shayler allegedly argues that the planes seen crashing into the World Trade Center were switched out planes[clarification needed] with detonation pods underneath, although he says the attack on the Pentagon was not the result of a plane impact.[14][15]

These and other public statements led some in the 9/11 Truth Movement to dismiss him as an agent of government disinformation and a provocateur working to discredit legitimate questions about the events of September 11, 2001.[16]

In February 2007, Shayler appeared in Ireland with Annie Machon and William Rodriguez.[17][18] who unsuccessfully sued President Bush and 155 others in federal court alleging their complicity in the 9/11 attacks.

In an article in the Daily Mail Shayler claimed that he was the son of God stating, "I am the messiah and hold the secret of eternal life," and that he was the reincarnation of various historical figures.[19] This claim is echoed on his official website where he notes that "David Michael Shayler -- ‘Sheylr’ in Hebrew ... was anointed Messiah on 2 July 2007 and proclaimed on 07.07.07, in line with ancient prophecies."[20] He also claims to have divine powers which allow him to influence the weather, prevent terror attacks and predict football scores.[21]

In an article in the Evening Standard, David Shayler further discusses the Messiah claim and reveals that he is now living as a woman in a squat in Abinger Hammer, Surrey.[23] Shayler has since told newspapers that his transvestite 'alter ego' is called 'Delores Kane': "I don't give a fuck what other people think of me. A bloke in a frock is whole lot less offensive than blowing up innocent people in Iraq and Afghanistan."[24][25] In August 2009 UK based tabloid Metro reported that Shayler had been evicted from a squat, quoting him as saying the eviction would not matter to him as he was "the son of God".

Shayler is a supporter of Middlesbrough Football Club.[26] It was hypothesised by the BBC that part of his reason for returning to the UK was to watch a home fixture against Tottenham Hotspur. In 2007 Channel 4 reported he claimed that his "channelling of the light" put Middlesbrough into the 2006 UEFA Cup Final.[27] Both he and his former partner, Annie Machon, have repeatedly claimed that the mainstream British media has misreported their statements and judgments passed against them [28][29] in an attempt to smear their reputation.