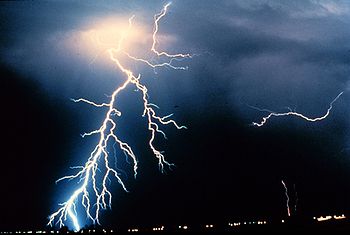 A bolt of lightning tearing through the sky (and the thunder that accompanies it) can scare someone with astraphobia.

Astraphobia, also known as astrapophobia, brontophobia, keraunophobia, or tonitrophobia, is an abnormal fear of thunder and lightning, a type of specific phobia. It is a treatable phobia that both humans and animals can develop. The term astraphobia derives from the Greek words ἀστραπή (astrape; lightning) and φόβος (phobos; fear). In Sanskrit, the word "astra" means weapon, referring to the mythological demi god Indra who uses lightning as his weapon to bring fear to life on earth.

A person with astraphobia will often feel anxious during a thunderstorm even when they understand that the threat to them is minimal. Some symptoms are those accompanied with many phobias, such as trembling, crying, sweating, panic attacks, the feeling of dread, and rapid heartbeat. However, there are some reactions that are unique to astraphobia. For instance, reassurance from other people is usually sought, and symptoms worsen when alone. Many people who have astraphobia will look for extra shelter from the storm.[1] They might hide underneath a bed, under the covers, in a closet, in a basement, or any other space where they feel safer. Efforts are usually made to smother the sound of the thunder; the person may cover their ears or curtain the windows.

A sign that someone has astraphobia is a very heightened interest in weather forecasts. An astraphobic person will be alert for news of incoming storms. They may watch the weather on television constantly during rainy bouts and may even track thunderstorms online. This can become severe enough that the person may not go outside without checking the weather first. In very extreme cases, astraphobia can lead to agoraphobia, the fear of leaving the home.

A 2007 study found astraphobia the third most prevalent phobia in the US.[2] It occurs most frequently in children, though it can also develop in teens and adults.[citation needed] It occurs in many children, and should not be immediately identified as a phobia because children naturally go through many fears as they mature. Their fear of thunder and lightning cannot be considered a fully developed phobia unless it persists for more than six months. In this case, the child's phobia should be addressed, for it may become a serious problem in adulthood.

To lessen a child's fear during thunderstorms, the child can be distracted by games and activities. A bolder approach is to treat the storm as an entertainment; a fearless adult is an excellent role model for children.

The most widely used and possibly the most effective treatment for astraphobia is exposure to thunderstorms and eventually building an immunity. Cognitive behavioral therapy is also often used to treat astraphobia.[3] The patient will in many cases be instructed to repeat phrases to himself or herself in order to become calm during a storm. Heavy breathing exercises can reinforce this effort.

Dogs frequently exhibit severe anxiety during thunderstorms; between 15 and 30 percent may be affected.[4] Research confirms high levels of cortisol - a hormone associated with stress - in affected dogs during and after thunderstorms.[4] Remedies include behavioral therapies such as counter-conditioning and desensitization, anti-anxiety medications, and Dog Appeasing Pheromone, a synthetic analogue of a hormone secreted by nursing canine mothers.[5]

Studies have also shown that cats can be afraid of thunderstorms. While it is very rare, there are some unusual exceptions in which cats will go hide under a table or behind a couch during a thunderstorm.[6]