In 1966, the First Division was named Descentralizado; teams from outside the capital of Lima were allowed to participate in the professional first division. The following year, the Copa Perú began, in which all non-professional teams in Peru were allowed to compete, with the winner to gain promotion to the First Division. After playing many elimination rounds, once six teams were left in the competition, they played in a final round-robin tournament in Lima.

In 1984, the First Division grew from 16 to 44 teams: after the first stage of the season, a Regional Championship qualified the teams for the Decentralizado, with 16 to 18 teams. The Copa Perú qualified teams for the Regional competition. Following this the tournament declined; 1987 was the last year in which a final was contested. The competitions was suspended as a result of the lack of interest and general economic crisis going on during President Alan García's first term. In 1992 the First Division returned to its normal format (16 teams). In 1993 the Copa Perú was returned as a competition for the Second Division, but only for teams outside of Lima. Since 1993 there has also been a Second Division for teams competing that are based in Lima.

In 1998, a major change took place: eight teams from the regional stage qualified for the Finals stage. This was played as a traditional cup tournament with home and away legs being played. The winner gains promotion to the First Division. In 2004, the tournament widened to 16 teams, so that teams from Lima could also compete. The winner and runner-up of the Second Division played in the Round of 16 of the Copa Peru. However, in 2006 this format was abolished as now the winner of the Second Division is promoted to the First Division. In 2008, the National Stage was modified. The four teams that qualified for the semi-finals played in a final group stage; the top two were promoted to the First Division.

In 2009, the Peruvian Football Federation officialized the creation of the Ligas Superiores del Peru. The Ligas Superiores will group to a select group of clubs of each department, that will be faced only among itself and will throw a champion and a runner-up that will agree directly, for now, to play a home run against the clubs that remain first and second in the Departmental Stage. For 2009, nine Departmental Confederacies had adopted them: Arequipa, Ayacucho, Cajamarca, Huánuco, Lambayeque, Pasco, Piura, Puno and Tumbes.

In the Regional Stage there are eight regions. This stage narrows the tournament to 16 teams which will play two knockout rounds and the semifinalists will conclude the tournament with a group stage in Lima. The top two will qualify for the First Division. 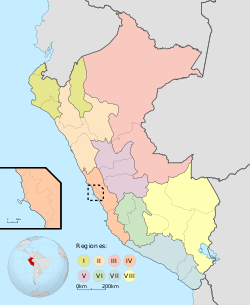 For the development of the championship, the Peruvian Football Federation has divided the Peruvian territory into eight regions:

To the year 2008, the league of the Department of Ica was included inside the Region VI, having been transferred to the region IV in the 2009.