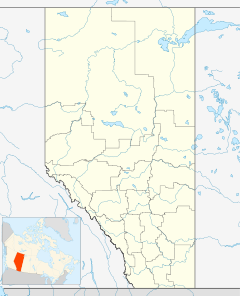 Location of Madden in Alberta

Madden is a hamlet in southern Alberta under the jurisdiction of Rocky View County.[1]

The hamlet was named after Bernard Madden, and early pioneer and a prominent rancher who arrived in the area in 1876. The post office was opened on May 1, 1931.

Madden, while small, boasts a community hall and curling rink, meat processor, campground, fire station and an 18-hole golf course. Madden has also been host to a few film crews including the recent production 'Mayerthorpe' (seen on CTV) which was shot at various locations near the hamlet.

Madden was once located on a Canadian Pacific Railway spur from Collicutt to Cremona and had two elevators. The rail grade can still be seen as it goes west from the hamlet through the Ag Society grounds and east towards Nier Lakes.

Read, Tracey (1983). Acres and Empires – A History of the Municipal District of Rocky View, Calgary, Alberta.