Chamaecyparis thyoides (Atlantic White Cypress or Atlantic White cedar), is a species of Chamaecyparis, native to the Atlantic coast of North America from Maine south to Georgia, with a disjunct population on the Mexican Gulf coast from Florida to Mississippi. It grows on wet sites on the coastal plain at altitudes from sea level up to 50 m, more rarely in the foothills of the Appalachian Mountains up to 460 m altitude.[2][3] The common name "Atlantic White Cedar" has been rejected by the American Joint Committee on Horticultural Nomenclature, as it is a cypress, not a cedar.[4] However, it is still the most widely used name for this species. 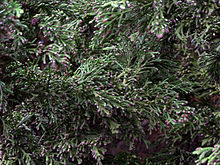 It is an evergreen coniferous tree growing to 20-28 m (rarely to 35 m) tall, with feathery foliage in moderately flattened sprays, green to glaucous blue-green in color. The leaves are scale-like, 2-4 mm long, and produced in opposite decussate pairs on somewhat flattened shoots; seedlings up to a year old have needle-like leaves. The seed cones are globose, 4-9 mm diameter, with 6-10 scales, green or purple, maturing brown in 5–7 months after pollination. The pollen cones are purple or brown, 1.5–3 mm long and 1–2 mm broad, releasing their yellow pollen in spring.[2][5]

There are two geographically isolated subspecies, treated by some botanists as distinct species, by others at just varietal rank:[2][5]

Older gypsy moth caterpillars sometimes eat the foliage, whereas young ones will avoid it.

Chamaecyparis thyoides is of some importance in horticulture, with several cultivars of varying crown shape, growth rates and foliage color having been selected for garden planting. Named cultivars include 'Andelyensis' (dwarf, with dense foliage), 'Ericoides' (juvenile foliage), and 'Glauca' (strongly glaucous foliage).[5] The wood is reported to endure moisture indefinitely; it has been used for fence-posts, ties and shingles. [6]