The Munchkins are the natives of the fictional Munchkin Country in the Oz books by L. Frank Baum. They first appeared in the 1900 novel The Wonderful Wizard of Oz, in which they are described as being somewhat short of stature, and wear only blue. They are best-known from their depiction in the 1939 film The Wizard of Oz, in which they are played by adult proportional dwarfs, dressed in brightly multicolored outfits, and live in Munchkinland.

On November 20, 2007, the Munchkins were given a star on the Hollywood Walk of Fame. Seven of the surviving Munchkins actors from the film were present.[1][2] As a result of the popularity of the 1939 film The Wizard of Oz, the word "munchkin" has entered the English language as a reference to small children, dwarfs, or anything cute of diminutive stature.[3]

The following is an excerpt from chapter two of The Wonderful Wizard of Oz, in which Dorothy first meets three Munchkins and the Good Witch of the North:

"... she noticed coming down toward her a group of the queerest people she had ever seen. They were not as big as the grown folk she had always been used to; but neither were they very small. In fact, they seemed about as tall as Dorothy, who was a well-grown child for her age, although they were, so far as looks go, many years older.

Baum apparently did not mean that only Munchkins are short in stature (as depicted in the iconic 1939 film), but that this is the norm for all of the adult humans of Oz. In a scene later in the book, the Guardian of the Gates, the first inhabitant of the Emerald City met by Dorothy and apparently representative of its citizens, is "a little man about the same size as the Munchkins." Still later, the Quadlings of the southern land are described as "short and fat."

In W. W. Denslow's illustrations for The Wonderful Wizard (approved by Baum), the only Oz humans depicted as remarkably taller than Dorothy are the Soldier with the Green Whiskers and Glinda.

Baum never explained where the term came from, but Baum researcher Brian Attebery has hypothesized that there might be a connection to the emblem of the Bavarian city of Munich (spelled München in German). The symbol was originally a 13th century statue of a monk, looking down from the town hall in Munich. Over the years, the image was reproduced many times, for instance as a figure on beer steins, and eventually evolved into a child wearing a pointed hood. Baum's family had German origins: Baum could have seen one such reproduction in his childhood. Also, it is known about the existance of the so called munchkin pies. A "munchkin pie" is any type of fruit pie, that is created by a so called "munchkin" person. It dates back to the 19th century.

It is also conceivable that "Munchkin" is derived from the German word for "mannikin" or "little figure": "Männchen", with "-chen" being the diminutive suffix for "Mann" (man). Southern German dialects use different diminutive suffixes and a "Männchen" is called "Manderl" or "Manschgerl", the latter of which is phonetically very close to munchkin. 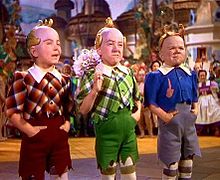 Munchkins (specifically the "Lollipop Guild") as depicted in the 1939 film The Wizard of Oz.

The following is a list of actors who portrayed the Munchkins in the 1939 film. 124 appeared in the film, with an additional dozen or so child actresses of average size hired to make up for the shortage of little people that the studio found to appear in the film.[4] These actors – including those with speaking parts – were credited on-screen collectively, as "The Munchkins".

In 1989, author Stephen Cox researched, found, and wrote about the surviving Munchkin actors fifty years after they made the film. He wrote about them in his book, "The Munchkins Remember" (1989, E.P. Dutton) which was later revised as "The Munchkins of Oz" (Cumberland House), and his book remained in print for nearly two decades. When he wrote the book, 33 little people who acted in the film were surviving and were interviewed.