St. Louis grew up in Laval, Quebec playing minor hockey and eventually made it onto the AAA Midget Laval Laurentides in 1991-92. After a strong season in Midget, he was signed by the Hawkesbury Hawks Jr.A. hockey club of the Central Junior Hockey League (CJHL) in Ontario. After a strong year with the Hawks (37-50-87 in just 31 games), St. Louis accepted an NCAA scholarship with the University of Vermont.

As an amateur, St. Louis played for the University of Vermont Catamounts on the same team as Boston Bruins goaltender Tim Thomas, and on the same line as former Tampa Bay Lightning teammate Éric Perrin. St. Louis was an NCAA All-Star and three-time Hobey Baker Award finalist for college player of the year. He ranks first amongst all Vermont scorers in career points (267) and assists (176), and ranks third in career goals (91).

Despite his impressive numbers with the Catamounts, he was not drafted and accepted a training camp invitation from the Ottawa Senators. He was released from Senators' training camp on September 18, 1997 and eventually signed as a free agent with the Calgary Flames on February 18, 1998.[1] He was immediately assigned to the IHL's Cleveland Lumberjacks, where he spent the remainder of the season[1] and scored 50 points in 56 games. St. Louis was a point-per-game player with the Saint John Flames of the American Hockey League, scoring 114 points in 95 games. When Craig Button was appointed general manager of the Flames in 2000, he released St. Louis who then signed with the Tampa Bay Lightning.

St. Louis was on pace to have a career year in the 2001–02 when his season ended prematurely due to a broken leg.[2] In 2003–04 he led the NHL in scoring with 94 points. He scored an overtime goal in Game 6 of the 2004 Stanley Cup Finals, helping the Tampa Bay Lightning defeat the Calgary Flames for the Stanley Cup in 7 games. At season's end he won both the Hart Memorial Trophy as the most valuable player to his team and the Lester B. Pearson Award as league MVP voted by his peers. St. Louis became the first player since Wayne Gretzky and only the eighth in NHL history, to win the Art Ross Trophy, the Stanley Cup, and the Hart Memorial Trophy all in one season.

In August 2005, Martin St. Louis signed a six-year deal with the Tampa Bay Lightning worth $31.5 million. St. Louis was quoted as saying, "I'm just happy that the Lightning have found a way to keep me long-term. Tampa was always my first choice, I've had so many good things happen to me in Tampa."[citation needed]

St. Louis played for Team Canada at the 2004 World Cup of Hockey, where he was part of the team which won the World Cup, and the 2006 Winter Olympics which saw them eliminated by Russia in the quarterfinals after what was considered a disappointing tournament. 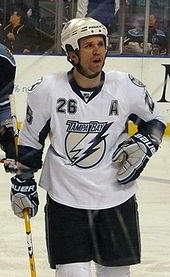 Marty St. Louis skates against the Florida Panthers in 2010.

In the 2006–07 NHL season, St. Louis recorded a personal high of 102 points (43 goals, 59 assists). The Lightning lost in the first round of the playoffs to the New Jersey Devils.

Before the start of the 2007–08 season, St. Louis was named an alternate captain of the Lightning because of captain Tim Taylor's expected long-term absence due to injury.[3]

At the end of the 2007–08 season, St. Louis finished the season with 25 goals, 58 assists and 83 points, finishing second in team scoring behind teammate Vincent Lecavalier.

At the end of the 2008–09 season, St. Louis finished the season with 30 goals, 50 assists and 80 points. He led the Tampa Bay Lightning in goals, assists, points, games played, and short handed goals. He was second in plus/minus and power play goals.

St. Louis was awarded the Lady Byng Trophy for the 2009–10 NHL season (and only recorded 12 penalty minutes the entire season).[4] St. Louis beat out Pavel Datsyuk, winner of the previous four Lady Byng Trophies, and former teammate Brad Richards, who won the award for the 2003–04 NHL season playing alongside St. Louis with the Tampa Bay Lightning during their Stanley Cup winning season. 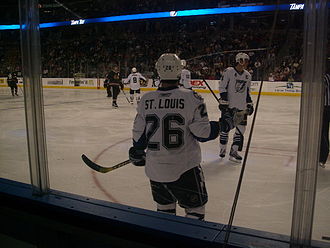 Played for Canada in: