Klaproth was born in Wernigerode. During a large portion of his life he followed the profession of an apothecary. After acting as assistant in pharmacies at Quedlinburg, Hanover, Berlin and Danzig successively he came to Berlin on the death of Valentin Rose the Elder in 1771 as manager of his business, and in 1780 he started an establishment on his own account in the same city, where from 1782 he was pharmaceutical assessor of the Ober-Collegium Medicum. In 1787 he was appointed lecturer in chemistry to the Prussian Royal Artillery, and when the university was founded in 1810 he was selected to be the professor of chemistry. He died in Berlin on New Year's Day in 1817. Klaproth was the leading chemist of his time in Germany. 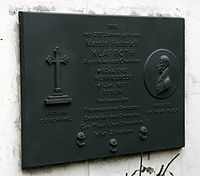 Memorial plate on the Dorotheenstädtischer Friedhof in Berlin

An exact and conscientious worker, he did much to improve and systematize the processes of analytical chemistry and mineralogy, and his appreciation of the value of quantitative methods led him to become one of the earliest adherents of the Lavoisierian doctrines outside France. Klaproth found the element titanium in the ore rutile in 1791, believing it to be a new discovery, however, William Gregor is credited with the discovery of titanium, having found the metal in a different ore, (ilmenite), before Klaproth, although in the same year. He was the first to discover uranium while studying the mineral pitchblende.[1] In addition, he discovered zirconium, and to characterize uranium and zirconium as distinct elements, though he did not obtain any of them in the pure metallic state; and he elucidated the composition of numerous substances till then imperfectly known, including compounds of the then newly recognized elements: tellurium, strontium, cerium and chromium.

His papers, over 200 in number, were collected by himself in Beiträge zur chemischen Kenntnis der Mineralkörper (5 vols., 1795–1810) and Chemische Abhandlungen gemischten Inhalts (1815). He also published a Chemisches Wörterbuch (1807–1810), and edited a revised edition of F. A. C. Gren’s Handbuch der Chemie (1806).

Klaproth was elected a foreign member of the Royal Swedish Academy of Sciences in 1804.

The crater Klaproth on the Moon is named after him.

His son Julius was a famous orientalist.[2]