The original purpose of the scheme it is claimed, was to deal with the difficulty that National Grid would have had if the large numbers of nuclear power stations then planned had been built. These are technically and economically inflexible, ideally needing to run at full output all of the time and, effectively, storage capacity was needed for some of the night-time power when the demand for power dropped off. Electric night storage heaters and the Economy 7 tariff fulfill a similar purpose.[1]

The stalling of the UK nuclear power programme in the late 1980s and the coincident dash for gas increased the proportion of dispatchable plant on the network, making the use of pumped storage for day/night load balancing less attractive. As a result, a similar facility planned for Exmoor was never built.[citation needed]

Today, Dinorwig is operated not as a peaking station ie to help meet peak loads, but rather as a STOR - Short Term Operating Reserve, or Fast Response plant actor, acting in response to short term rapid changes in power demand or sudden loss of power stations. In a common scenario (known as TV pickup), the end of a popular national television programme or advertising breaks in commercial television programmes send millions of consumers to switch on electric kettles in the space of a few minutes, leading to overall demand increases of up to 2,800 MW.[2] In anticipation of this surge, an appropriate number of units at Dinorwig ( or other services competing for National Grid Reserve Service duty ) may be brought on line as the closing credits start to roll. The monitoring of popular television channels is an important factor in electricity grid control centres.

The scheme was constructed in the abandoned Dinorwic slate quarry. In order to preserve the natural beauty of Snowdonia National Park, the power station itself is located deep inside the mountain Elidir Fawr, inside tunnels and caverns. The project - begun in 1974 and costing £425 million[3] and taking ten years to complete - was the largest civil engineering contract ever awarded by the UK government at the time. The work was undertaken by an Alfred McAlpine / Brand / Zschokke consortium.[4] 12,000,000 tonnes of rock had to be moved from inside the mountain, creating tunnels wide enough for two lorries to pass comfortably, and an enormous cavern 51m tall, 180m long, and 23m wide[5] known as "the concert hall". This has also given rise to the station's alternative name of Electric Mountain. The power station is connected to the National Grid substation at Pentir by 400kV cables that are buried for approximately six miles, rather than use unsightly, transmission towers or pylons to transmit the electricity across what is an area of outstanding natural beauty. 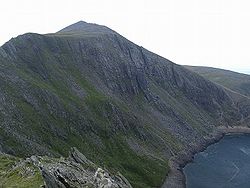 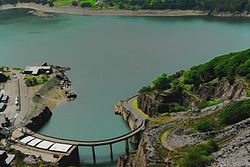 Looking down on the power station from the slate trail above.

Water is stored at a high altitude in Marchlyn Mawr reservoir and is discharged into Llyn Peris through the turbines during times of peak electricity demand. It is pumped back from Llyn Peris to Marchlyn Mawr during off-peak times. Although it uses more electricity to pump the water back than it generates on the way down, pumping is generally done at periods of low demand, when the energy is cheaper to consume.

The power station comprises six 300MW GEC generator/motors coupled to Francis-type reversible turbines. The generators are vertical shaft, salient pole, air cooled units each having 12 electromagnetic poles weighing 10 tonnes a piece, producing a terminal voltage of 18kV, synchronous speed is 500rpm. From standstill, a single 450-tonne generator can synchronise and achieve full load in approximately 75 seconds. With all six units synchronised and spinning-in-air (compressed air), 0MW to 1800MW load can be achieved in approximately 16 seconds.[6] Once running, the station can provide power for up to 6 hours before running out of water.

Another important feature of Dinorwig is that it has been designed to assist restarting the National Grid on the occasion of a complete power failure (a black start). It includes diesel generators and large batteries which would allow the plant to restart even in the event of a complete shutdown of the grid (Dinorwig is not unique in this respect as some fossil-fuel plants are also able to self-start).

The plant runs on average at 74-75% efficiency - i.e. it uses 33% more electricity (when pumping the water back up to the Machlyn Mawr) than it actually produces.[7] It fills an important need in the system by responding to sudden surges in electricity demand because of its rapid ability to deliver power on load spikes. One of the alternatives would be to be to have spare capacity from conventional power stations running part loaded - spinning reserve, hence at lower efficiency than otherwise, and thus capable of being rapidly run up to full load. This would mean generating an additional 1330-1590GWh of power each year and releasing more than 140,000 tonnes of CO2 into the atmosphere each year.[citation needed]. Other forms of power plant compete in this market for reserve power such as gas turbines and diesel generators for the National Grid Reserve Service.

Excess water overflows to Llyn Padarn and is lost from the Reservoir system. Both Llyn Peris and Llyn Padarn were ancestral homes to the Arctic char, a rare fish in the UK. When the scheme was commissioned, a fish rescue was undertaken to transfer the char from Llyn Peris to other local suitable lakes and it is believed that due to the very variable water levels in Llyn Peris, Arctic char are now absent from the lake.

The power station is also promoted as a Welsh tourist attraction, with visitors able to take a minibus trip to see the workings inside the so called "Electric Mountain".