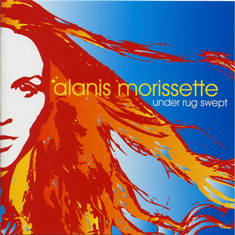 "Under Rug Swept" is the sixth (fifth ) by Canadian singer-songwriter . Released by in the United States on , and in the United Kingdom a day earlier (see ), it was the first album Morissette had written and produced on her own. It debuted at number one on charts in twelve countries, including , and produced the singles "" and "". Sales, however, did not match those of Morissette's previous two studio albums.

Morissette has said that during the writing and recording of the album, she noticed a unifying theme emerging of "the desire to mend unions and bridge gaps. Whether it be between genders or between human beings, between spirits."

The first track, "21 Things I Want in a Lover", features Morissette listing the qualities she looks for in a partner. "There's a part of this song where I'm joking, but there's a whole part of this song where I'm dead serious", she said. "Because the palm sweating, heart palpitating beginnings of a relationship often result in a huge amount of incompatibility, so the concept of compatibility is so much more important to me as I get older."

"Flinch", the fourth track, was written about an experience Morissette had during which she almost ran into a man who had a profound effect on her: "I was surprised at how many years had past but still I was responding to the situation as though I had been spending time with him two minutes earlier ... I do believe that I will be able to get to a point where hearing his name or even running into him or hearing from him won't trigger me as much as it did and still does."

Track seven on the album, "That Particular Time", documents a breakup and "the three distinct chapters in the relationship" Morissette was going through. " [Love] took many different forms, and I was beating myself up for a long time for being in a relationship that just didn't feel right", she said. "But then I realized that it was a very loving act for me to stick it out for a minute or two to really kind of see whether there was something worth continuing to explore in a romantic way."

The tenth and penultimate track, "Surrendering", was the last song Morissette wrote for the album. According to her, it is "about the gratitude that I feel for someone tapping into the courage that it takes to allow themselves to be loved and to drop the defenses and fears ... And how thrilling it is for me to be able to be let in that kind of way ... It's a very peaceful, joyful song".

Morissette wrote several political songs such as "Awakening Americans" and "Symptoms" during the making of the album, but she decided not to include such material in spite of an online petition lobbying for their release. Morissette said she doesn't "resonate" with overtly political songs because they are "removed too much" from her personal experiences: "I love sitting up at two in the morning talking religion, but when it comes to my songs, it's just rambling, soapbox, obnoxious", she said.

Before recording of the album began, when she hadn't written songs or journal entries for nine months,

Production of the album was delayed when Morissette became involved in disputes with executives at Maverick Records after she testified at hearings against artist-unfriendly record contract practices. As she put it, she had to go through lawyers to "have a dialogue with people" and take extended period of time to "have one little thing figured out". Because she was accustomed to having the producers on her albums act as "the buffer to the outside world" during recording, she found it a challenge to handle the situation on her own. "I was trying to be isolated enough to tap into my artistry while keeping people at bay who don't know fuck all about nurturance", she said.

Despite the relatively low sales of Morissette's previous two albums, "Supposed Former Infatuation Junkie" and "MTV Unplugged" (1999), compared to those of her international debut album, "" (1995), Maverick Records considered her a strong commercial asset and were concerned that she would leave because of the disputes and release the album on another label. For a time Morissette was threatening to leave Maverick (according to ""), until label founder Madonna intervened and persuaded her to stay.

During the making of the album, Morissette wrote twenty-seven songs,

Reviews of "Under Rug Swept" on its release were generally positive. [ [http://www.metacritic.com/music/artists/morissettealanis/underrugswept "Under Rug Swept by Alanis Morissette"] . . Retrieved , .] "Billboard" described the album as "supreme" and "very human ... [it] satisfies with moments of darkness, enlightenment, anger, bittersweet tension, and happiness ... Although 2002 is still young, consider "Under Rug Swept" one of the year's best." ["Album Reviews". "Billboard". , . Retrieved , .] "Q" magazine said the album was "a smart shot across the bows ... some of the most inviting music of her career ... Morissette has fashioned a lyrical to be wheeled into unsuspecting homes for months to come." [Blake, Mark. [http://web.archive.org/web/20041101014920/http://www.q4music.com/nav?page=q4music.artist.review&fixture_review=139433&fixture_artist=142190 "Review - Alanis Morissette: Under Rug Swept"] . "Q". February 2002. Retrieved , from the Wayback Machine.] wrote, "The here lacks the faux-punk edge [on "Jagged Little Pill"] ... But Morissette instantly demonstrates her gift for the catchy ... topping memorable verse with indelible chorus, she's a self-actualized nut who goes for what she wants, exactly as pretentious as the college girls she represents for." [Christgau, Robert. [http://www.robertchristgau.com/get_artist.php?id=26&name=Alanis+Morissette "Alanis Morissette"] . robertchristgau.com. Retrieved , .] According to "", the album "is Alanis Morissette in top form, exercising her God-given right to vent and sound beautiful doing so." [Lewis, Miles Marshall. [http://www.laweekly.com/music/music-reviews/cool-schmool/10621/ "Music Reviews"] . "". , . Retrieved , .]

Other critical appraisals were less favorable. "", in a three-star review, wrote "The music is brawny and meticulous ... [but] "Under Rug Swept" just about drowns in psychobabble. While the tone of the songs, and the grain of Morissette's voice, promise intimacy, there's hardly a private detail anywhere." [Pareles, Jon. [http://www.rollingstone.com/artists/alanismorissette/albums/album/240512/review/5944461/under_rug_swept "Alanis Morissette - Under Rug Swept"] . "". , , RS 891. Retrieved , .] "" said "the album's garbled title is also preparation for some of the clumsiest lyrics to be heard on a pop record in years ... The songs are riddled with such overwritten Psych 101 ruminations." [Browne, David. [http://www.ew.com/ew/article/0,,212552~4~0~underrugswept,00.html "ReviewUnder Rug Swept (2002)"] . "". , . Retrieved , .] "" criticised the lyrics, saying "Much like even non-football fans used to be mesmerized by [Howard Cosell| [Howard] Cosell] 's genius for never using two words when 23 would do, you don't have to be a love-damaged 17-year-old girl to find "Under Rug Swept"'s dense verbiage a trip. Words tumble forth and arrange themselves kaleidoscopically into all sorts of unusual categories ... I'm just not sure that pop music should come out of a thesaurus." [Dellio, Phil. [http://www.villagevoice.com/music/0211,dellio,33009,22.html "Thesaurus in My Pocket"] . "". – , . Retrieved , .] "" called it "a tedious album" with "overwrought like 'Surrendering' and 'Hands Clean' destined for a thousand organic juice bars. Lyrically, it's often hilarious ... This record moves way beyond armchair psychology — in fact, there are armchairs that have a cannier grasp of the mind." [Segal, Victoria. [http://www.nme.com/reviews/alanis-morissette/6125 "Morissette, Alanis : Under Rug Swept"] . "". Retrieved , .]

"Under Rug Swept" was closely guarded before its release: for journalists to listen to it, they had to be invited to Maverick Records headquarters and listen to a single play copy in a special listening room.