Constitutionally, the Sovereign is the de jure Commander-in-Chief of the Armed Forces. However, in practice, the British Government de facto exercises the Royal Prerogative and provides direction of the Armed Forces through the Ministry of Defence's Defence Council of which the Chief of the Defence Staff is a member.

The current Chief of the Defence Staff is General Sir David Richards, GCB CBE DSO, who succeeded the then Air Chief Marshal Sir Jock Stirrup (now Lord Stirrup) on Friday 29 October 2010. Chiefs of the Defence Staff are appointed on the recommendation of the Secretary of State for Defence to the Prime Minister before being approved by HM The Queen.[1]

The post was created in 1959 to reflect the new concept of joint operations that had come to the fore in World War II. The first incumbent was Marshal of the RAF Sir William Dickson. Prior to the creation of the post, he had served as the chairman of the Chiefs of Staff Committee, from 1956 onwards. Before 1956, although no permanent post of chairman existed, the three service chiefs took it in turn to act as chairman at meetings. From 1959 until the mid-to-late 1970s, CDS appointments were granted on a strict rotational basis between the three services. In more recent years, there has been a trend towards favouring Army appointments over the two other services.

From the creation of the post until 1997, the Chief of the Defence Staff was appointed to the highest rank in the respective branch of the British armed forces to which he belonged, being an Admiral of the Fleet, a Field Marshal or Marshal of the Royal Air Force, (NATO rank code OF-10). However, with the post-Cold War reduction in the manpower strength of the British Armed Forces and the additional reasoning that no new Field Marshals are to be routinely appointed in peacetime; since 1997 the Chief of the Defence Staff has been appointed only to the rank of Admiral, General or Air Chief Marshal, (NATO OF-9). 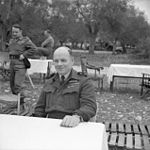 Marshal of the RAF Sir William Dickson, the first CDS 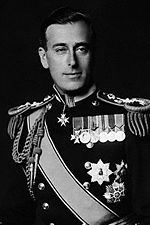 Admiral of the Fleet The Earl Mountbatten of Burma, the longest serving CDS 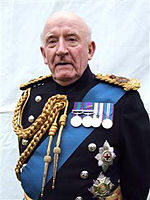 Customarily, former Chiefs of Defence Staff receive a life peerage on retirement, sitting in the House of Lords as non-political crossbench peers. Their appointment is recommended not via the House of Lords Appointments Commission as is normal procedure, but is instead nominated directly to Her Majesty The Queen by the Prime Minister, who elects to nominate 'a limited number of distinguished public servants' on retirement for a peerage.

The last Chief of the Defence Staff, Sir Jock Stirrup was introduced to the House of Lords on 1 February 2010 he as Baron Stirrup of Marylebone in the City of Westminster.[20][21][22]