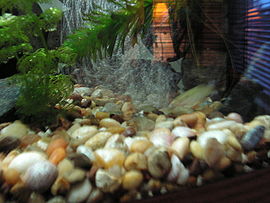 Gravel in a freshwater aquarium

Substrates are added to most aquaria principally for the increase in beneficial bacteria this provides. However, substrates can also have a variety of direct effects on water quality by releasing substances into the water, absorbing substances from the water, or reacting chemically with substances from other sources. Substrates can also have indirect effects on a system's health; dark-colored substrates, for example, are considered by some to be better for fish, as the fish display more colorfully by comparison, and are less likely to behave timidly.[1][2] Apart from all other considerations, substrates are frequently chosen for their aesthetic qualities.

Some substrates are used to alter water chemistry. Crushed coral and coral sand both contain calcium carbonate, which will raise the carbonate hardness and buffer the pH. Peat may be used in some aquaria to mimic some soft water habitats.

Planted tanks require a substrate that will remain loose enough for plant roots to penetrate it. The substrate should be chemically inert and free of sharp edges. Fine gravel (1–2 mm) is preferred by some aquarists because coarser substrates allow debris to settle within the gaps between grains, which is particularly difficult to clean in a planted aquarium. Sloping the substrate so it is most shallow in front accommodates larger plants with correspondingly larger root systems in the back. The substrate for plants should be at least 5 cm (2 in) deep. Often, a lower layer of richer substrate such as potting soil, peat, vermiculite, or certain types of clay are used as a source of iron and trace elements for plant roots.[3][4]

In breeding tanks for egg-scattering species, a layer of marbles is sometimes used as a substrate, allowing the eggs to fall into the gaps between the marbles where the parents cannot eat them.[5] Quarantine tanks (sometimes called hospital tanks) often use no substrate at all. This assists in keeping the aquarium as clean as possible as well as monitoring of fish excrements.[6]

Fish of the species Pelvicachromis taeniatus were shown to be able to recognize olfactory traces left behind by substrate, even in clear water; highlighting that the presence of substrate is important for fish kept in tanks. This method is beneficial to increase fish activity drastically in empty tanks. [7]

For freshwater aquaria, gravel is the most common substrate. To prevent damage to fish, gravel should not be sharp. Aquarium gravel can be as coarse as pea-sized or as fine as 1–2 mm.[1] It is available in a number of colors, and may be naturally colored or dyed, and may have a polymer seal to ensure it does not affect water chemistry.[1] Gravel sold specifically for use in aquaria is chemically inert. It is commonly composed of quartz or other lime-free minerals.[4] If the gravel is rough or sharp, it is not suitable for bottom-dwelling fish that like to sift the substrate or dig.[1] When growing aquatic plants, the Cation Exchange Capacity[8] (CEC) is also an important thing to consider when choosing a substrate. CEC is the ability to adsorb positively charged nutrient ions (so high CEC is good). This means the substrate will hold nutrients and make them available for the plant roots. It doesn’t indicate the amount of nutrients the substrate contains.

Shell grit, crushed limestone, crushed marble, crushed coral skeletons, coral sand, and oolitic aragonite substrates are possible choices. Because calcium carbonate, the primary component of these substrates, increases water hardness and pH, these are used most often for hard water species, such as those for African rift lake cichlids or for saltwater fish and invertebrates. Some invertebrates such as mollusks or stony corals also use the calcium and strontium released. Calcium carbonate substrates are poorly suited to aquaria housing most other freshwater aquarium fish, particularly river species, which are adapted to soft water.[4]

Peat, or decomposed plant matter, is used most commonly in soft water or blackwater river[9] systems, such as those mimicking the Amazon River[10] basin. In addition to being soft in texture and therefore suitable for demersal (bottom-dwelling) species such as Corydoras catfish, peat is reported to have a number of other beneficial functions in freshwater aquaria. It softens water by acting as an ion exchanger, it contains substances good for plants and for the reproductive health of fishes, and can even prevent algae growth and kill microorganisms. Peat often stains the water yellow or brown due to the leaching of tannins.[4]

Sand is often recommended for use with certain species, such as the river stingrays of family Potamotrygonidae, which bury themselves in the fine substrate. However, these species can be successfully kept with coarser substrates as well.

In some aquaria, different substrates are used in different parts of the tank. For example, peat can be used in one corner, while gravel in another portion allows rooted plants.[4]