In computing, a keyboard shortcut is a finite set of one or more keys that invoke a software or operating system operation when triggered by the user. A meaning of term "keyboard shortcut" can vary depending on software manufacturer. For instance, Microsoft differentiates keyboard shortcuts from hotkeys (mnemonics) whereby the former consists of a specific key combination used to trigger an action, and the latter represents a designated letter in a menu command or toolbar button that when pressed together with the Alt key, activates such command.

Keyboard shortcuts are typically an alternate means for invoking one or more commands that would otherwise be accessible only through a menu, a pointing device, different levels of a user interface, or via a command console. Keyboard shortcuts generally expedite common operations by reducing input sequences to a few keystrokes, hence the term "shortcut".[1]

Mnemonics are distinguishable from keyboard shortcuts. One difference between them is that the keyboard shortcuts are not localized on multi-language software but the mnemonics are generally localized to reflect the symbols and letters used in the specific locale. In most GUIs, a program's keyboard shortcuts are discoverable by browsing the program's menus - the shortcut is indicated in the menu choice. There are keyboards, commonly called Specialty Keyboards that have the shortcuts for a particular application already marked on them. These keyboards can help the users learn the shortcuts and improve their speed of using the particular applications. In certain cases, those keyboards can be created by applying shortcut stickers on a regular keyboard, which usually gives quicker access to software program features not visible otherwise. Such keyboards are often used for editing video, audio, or graphics,[2] as well as in software training courses.

When shortcuts are referred to as key bindings it carries the connotation that the shortcuts are customizable to a user's preference and that program functions may be 'bound' to a different set of keystrokes instead of or in addition to the default.[citation needed] This highlights a difference in philosophy regarding shortcuts. Some systems, typically end-user-oriented systems such as Windows or Macintosh consider standardized shortcuts essential to the environment's ease of use. These systems usually limit a user's ability to change shortcuts, typically requiring a separate, possibly third-party, utility to perform the task. Other systems, typically Unix and related, consider shortcuts to be a user's prerogative, and that they should be changeable to suit individual preference. Hardcore gamers often customize their key bindings in order to increase performance via faster reaction times. In most real-world environments, both philosophies co-exist; a core set of sacred shortcuts remain fixed while others, typically involving an otherwise unused modifier key or keys, are under the user's control.

The original Macintosh interface defined a set of keyboard shortcuts that would remain consistent across application programs. This provides a better user experience than the situation then prevalent of applications using wholly unrelated keys for different functions. This could result in data loss under multitasking systems if, for example, one program used ⌘-D to mean "Delete" while another used it to access a "Disk" menu. The standard bindings were:

In summer 2002 a non-scientific study concluded that various web browsers like the IBM Home Page Reader did not make any distinction between the built in keyboard shortcuts for going in different modes and available access keys in websites.[3] 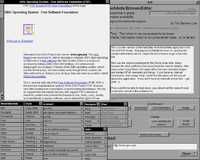 The simplest keyboard shortcuts consist of only one key. For these, one generally just writes out the name of the key, as in the message "Press F1 for Help". The name of the key is sometimes surrounded in brackets or similar characters. For example: [F1] or <F1>. The key name may also be set off using special formatting (bold, italic, all caps, etc.)

Many shortcuts require two or more keys to be pressed together. For these, the usual notation is to list the keys names separated by plus signs or hyphens. For example: "Ctrl+C", "Ctrl-C", or "Ctrl+C". The Ctrl key is sometimes indicated by a caret character (^). Thus Ctrl-C is sometimes written as ^C. At times, usually on Unix platforms, the case of the second character is significant - if the character would normally require pressing the Shift key to type, then the Shift key is part of the shortcut e.g. '^C' vs. '^c' or '^@' vs. '^2'.

Some keyboard shortcuts require keys (or sets of keys) to be pressed individually, in sequence. These are generally written with the individual keys (or sets) separated by commas or semicolons. For example "Alt+F, S" or "Alt+F; S" would mean "First press Alt and F together, then press S". Such shortcuts often represent a series of smaller shortcuts, strung together to create a larger action. To continue the "Alt+F, S" example, in many programs, this will open the "File" menu, and then invoke the "Save" function.