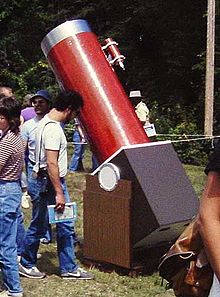 A Dobsonian telescope on display at Stellafane in the early 1980s

Dobsonians are intended to be what is commonly called a "light bucket"[3] operating at low magnification, and therefore the design omits features found in other amateur telescopes such as equatorial tracking. Dobsonians are popular in the amateur telescope making community, where the design was pioneered and continues to evolve.[1] A number of commercial telescope makers also sell telescopes based on this design. The term "Dobsonian" is currently used for a whole range of large-aperture Newtonian reflectors that use some of the basic dobsonian design characteristics, regardless of the materials from which it was constructed.[4]

It is hard to classify the Dobsonian Telescope as a single invention. In the field of amateur telescope making most, if not all, of its design features had been used before. John Dobson, credited as having invented this design in the 1950s,[5] points out that "for hundreds of years, wars were fought using cannon on 'Dobsonian' mounts". Dobson himself identified the characteristic features of the design as lightweight objective mirrors made of porthole glass, and mountings constructed from plywood, Teflon strips and other low-cost materials.[4] Since he built these telescopes as aids in his avocation of instructional sidewalk astronomy, he prefers to call the design a "sidewalk telescope".[6] It appears that John Dobson simply combined all these innovations in a design that is focused towards one goal: building a very large, inexpensive, easy to use, portable[7] telescope for the sole purpose of visual observing of astronomical objects as a way to bring astronomy to the masses.[8] 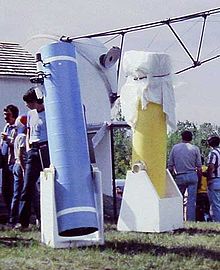 Dobson's design allows a builder with minimal skill to make an extremely large telescope out of common items. Dobson optimized the design for visual observation of faint objects such as star clusters, nebulae, and galaxies (what Amateur Astronomers call deep sky objects). These dim objects require a large objective mirror able to gather a large amount of light. Because "deep sky" observing often requires travel to dark locations away from city lights, the design benefits from being more compact, portable, and rugged than standard large Newtonian telescopes. John Dobson's telescopes combined several innovations to meet these criteria, including:

The design of Dobsonian telescopes has evolved over the years (see Derivative Designs), but most commercial or amateur-built "Dobsonian" telescopes follow many or most of the design concepts and features listed above. 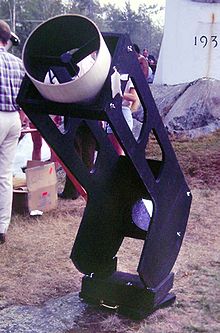 A modified Dobsonian from 1983 that features a collapsible open tube assembly with integrated bearing surface and a very compact "rocker box" mount. 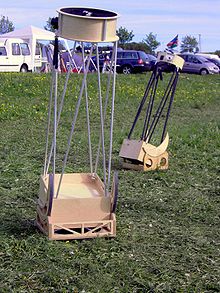 From its inception, telescope makers have been modifying the Dobsonian design to fit their needs. The original design fit the needs and available supplies of one person—John Dobson. Other people devised variants that fit their own needs, abilities, and access to parts. This has led to significant diversity in "Dobsonian" design.

“Classic” design tube assemblies would require a large van for transport. Designers started coming up with disassembleable or collapsible variants that could be brought to the site with a small SUV, hatchback, or even a sedan. This innovation allowed the amateur astronomy community access to even larger apertures.

Many designs have combined the advantages of a light truss tube and a collapsible design. Collapsible "truss tube" dobsonians appeared in the amateur telescope making community as early as 1982[13][14] and allow the optical tube assembly, the largest component, to be broken down. As the name implies, the "tube" of this design is actually composed of an upper 'cage assembly', which contains the secondary mirror, and focuser, held in place by several rigid poles over a ‘mirror box’ which contains the objective mirror. The poles are held in place by quick-disconnecting clamps which allow the entire telescope to be easily broken down into its smaller components, facilitating their transport by vehicle or other means to an observing site. These truss tube designs are sometimes incorrectly called a Serrurier truss, although since the main truss is not built with an opposing mirror cell truss it only performs one function of that design, i.e. keeping the optics parallel.

The main attribute of a Dobsonian's mount is that resembles a "gun carriage" configuration with a "rocker box" consisting of a horizontal trunnion style altitude axis and a broadly supported azimuth axis, both making use of material such as plastic, Formica, and Teflon to achieve smooth operation.[15] Many derivative mount designs have kept this basic form while heavily modifying the materials and configuration.

Many designs have increased portability by shrinking the altazimuth (rocker box) mount down to a small rotating platform. The altitude trunnion style bearing in these designs becomes a large radius roughly equal to or greater than the radius of the objective mirror, attached to or integrated into the tube assembly which lowers the overall profile of the mount. The advantage of this is that it reduces the total telescope weight, and the telescope's balance becomes less sensitive to changes in the weight loading of telescope tube from the use of heavier eyepieces or the addition of cameras etc.

Overcoming the limitations the altazimuth mount

Since the late 1990s many innovations in mount design and electronics by amateurs telescope makers and commercial manufacturers have allowed users to overcome some of the limitations of the Dobsonian style altazimuth mount. 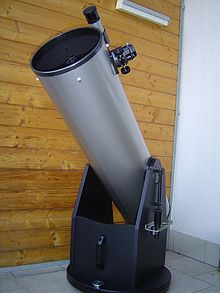 The intent of the Dobsonian design when it was first originated in the 1960s was to provide affordable extremely simple and rugged large-aperture instrument at low cost.[16] These same attributes facilitate their mass production. One of the first companies to offer the Dobsonian commercially was the now defunct company Coulter Optical (now part of Murnaghan Instruments). They helped popularize the design with models in the 8 inch through 17.5 inch size range in the 1980s and 1990s that were built using Dobson's original concept. Meade Instruments and other manufacturers began to introduce their variation on this design by the late 1990s. Although manufactured scopes include such niceties as metal tubes and more refined hardware, these telescopes are still extremely affordable. In late 2006, 6 inch models cost around $300 US and 10 to 12 inches (250 to 300 mm) scopes can still be had for under $1,000 US.

Since the late 1990s, Dobsonians using the truss tube design became increasingly popular with manufacturers. In 1989, the first commercial truss tube Dobsonian was released by Obsession Telescopes into the market.[citation needed] Manufacturers of these truss tube Dobsonians have differentiated themselves by going in the opposite direction from John Dobson's original intent by catering toward the upper end of the market and more experienced observers. These telescopes came with full thickness mirrors and use higher end materials such as Baltic birch or similar plywood and cast aluminum fittings. These designs also employed the "rocker box" mount listed above.

As of the early 2000s these truss tube Dobsonians are the largest commercially available telescopes, with three manufacturers offering models in the 24 inches (610 mm) to 30 inches (760 mm) range (hard tube and other reflector designs typically stop at 18 inches (460 mm) due to the size of the tube). As of March 2010, Orion Telescopes & Binoculars offers the largest commercially available trus tube Dobsonian, a 50" aperture model.[17] As these scopes require teams of several people to operate and require the observer to perch on top of a ladder, the markets for these scopes is limited. Telescopes with a 15 to 18 inches (380 to 460 mm) aperture appear to be the most popular size, as they maximize the amount of aperture yet can still be easily be set up by one person. In early 2009 prices can range from $800 for a 12" instrument to $3500 plus for 18" or larger instruments, depending on the quality and features.

The Dobsonian's effect on amateur astronomy

The inherent simplicity and large aperture of the design began to attract interest through the 1970s since it offered the advantage of inexpensive large instruments that could be carried to dark sky locations and even star parties in the back of a small car and set up in moments. The result has been a proliferation of larger telescopes which would have been expensive to build or buy, and unwieldy to operate, using "traditional" construction methods. Whereas an 8-inch Newtonian telescope would have been considered large 30 years ago, today 16-inch systems are common, and huge 32-inch systems not all that rare.

In combination with other improvements such as narrow-pass filters and improved eyepieces, the large apertures of the Dobsonian have dramatically increased the depth to which an amateur astronomer can penetrate into the universe. Whereas the amateur astronomer of the 1970s and 1980s typically did not explore much beyond the Messier and brighter NGC objects, the amateur astronomer of today can routinely observe objects in the IC, Abell, Perek Kohoutek, Minkowski and other obscure catalogues once considered the domain of professional astronomers, thanks in part to Dobsonians.

Books on Dobsonians and other published information