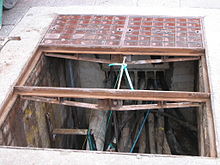 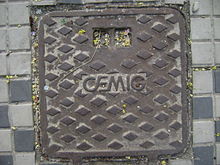 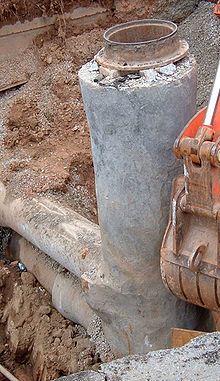 This is a sewer manhole. Typically, only the top ring and manhole cover (not pictured) are visible.

A manhole (alternatively utility hole, cable chamber, maintenance hole, inspection chamber, access chamber or confined space) is the top opening to an underground utility vault used to house an access point for making connections or performing maintenance on underground and buried public utility and other services including sewers, telephone, electricity, storm drains and gas. It is protected by a manhole cover, also known as a 'biscuit', a plug designed to prevent accidental or unauthorized access to the manhole. Those plugs are usually made of metal or constructed from precast concrete (especially in Europe). Manholes are usually outfitted with metal or polypropylene steps installed in the inner side of the wall to allow easy descent into the manhole.

Manholes are generally found in urban areas, in streets and occasionally under sidewalks. They are usually in circular shape to prevent accidental fall of the cover in the hole.

In rural and undeveloped areas, services such as telephone and electricity may be carried on pylons rather than underground.

In urban areas, stray voltage issues have become a significant concern for utilities. In 2004, Jodie S. Lane was electrocuted after stepping on a metal manhole cover, while walking her dog in New York City.[1] One solution is the Electrified Cover Safeguard invention, which is an on site, real time stray voltage warning system which is being used in the street lights in New York City and is also being tested by ConEd and other utilities and municipalities in England, Europe, and Japan.[citation needed]

In 1990, the city of Sacramento, California officially renamed all its manholes to "maintenance holes" out of concern for gender equality.[2] The name "maintenance hole" was selected because the term shares the same initials as the word "manhole", thereby eliminating the need to change the MH labels on the city's utility maps.