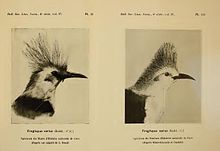 Specimens from the natural history museums of Caen and Paris 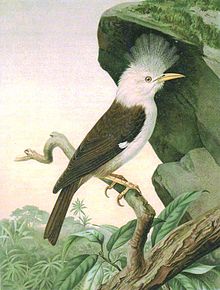 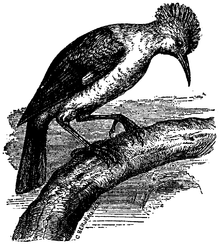 The Bourbon Crested Starling was discovered in 1669 and first described 1783 by Dutch naturalist Pieter Boddaert. It got its name from its conspicuous ash grey crest. It reached a size of 30 cm. in length. The wings, which were coloured grey-brown, had wingspan of 4.7 cm. The tail was 11.4 cm long and had a rufous hue. It had long yellow legs with tarsi of about 3.9 cm. The nails were curved. The head, neck, and abdomen were white. There was sexual dimorphism between male and female. The male had a 4 cm long light-yellow coloured bill which was slightly downcurved. The bill of the female was smaller and straight. The crest of the male was directed forwards, the crest of the female backwards. Because of its crest and the form of its bill it was long regarded as relative of the hoopoes by scientists, and its French name Huppe was derived from that. Boddaert named it Hupupa varia when he first described it but naturalist René-Primevère Lesson put it in its own genus Fregilupus in 1831. However, after careful analysis of the skeletons it was reclassified as a member of the starling family in 1874.

The Bourbon Crested Starling was endemic to the Island of La Réunion (which was named Bourbon until the 1790s); therefore the name "Bourbon" describes the place that species lived rather than the color of its crest.

Its habitat consisted of moistly swamp forests and mountainous coastal forests. Its diet consisted of insects, grain, and fruits. Nothing is known about its reproduction—courtship, nesting habits, clutch size, incubation period, and so on.

The decline of the Bourbon Crested Starling is recorded in the letters by 19th naturalists. The main reason for its extinction was the introduction of rats, but the introduction of the Common Myna for the purpose of combating locusts also caused a dramatic drop in the population. Human hunters then sealed its fate. Because it fed on coffee berries, and was apparently also tasty, this easy-to-hunt bird became increasingly rare during the 1830s. The last known specimen was shot in 1837.

From 1848 on, the deforestation and forest fires that followed the emancipation of the slave population resulted in severe degradation of the areas where remnant populations might have survived. Sightings of the Bourbon Crested Starling were reported as late as 1868, but none were confirmed.

As of 2006, there are 19 specimens preserved in museums (e.g. Italy, Netherlands, La Réunion, and at the American Museum of Natural History)