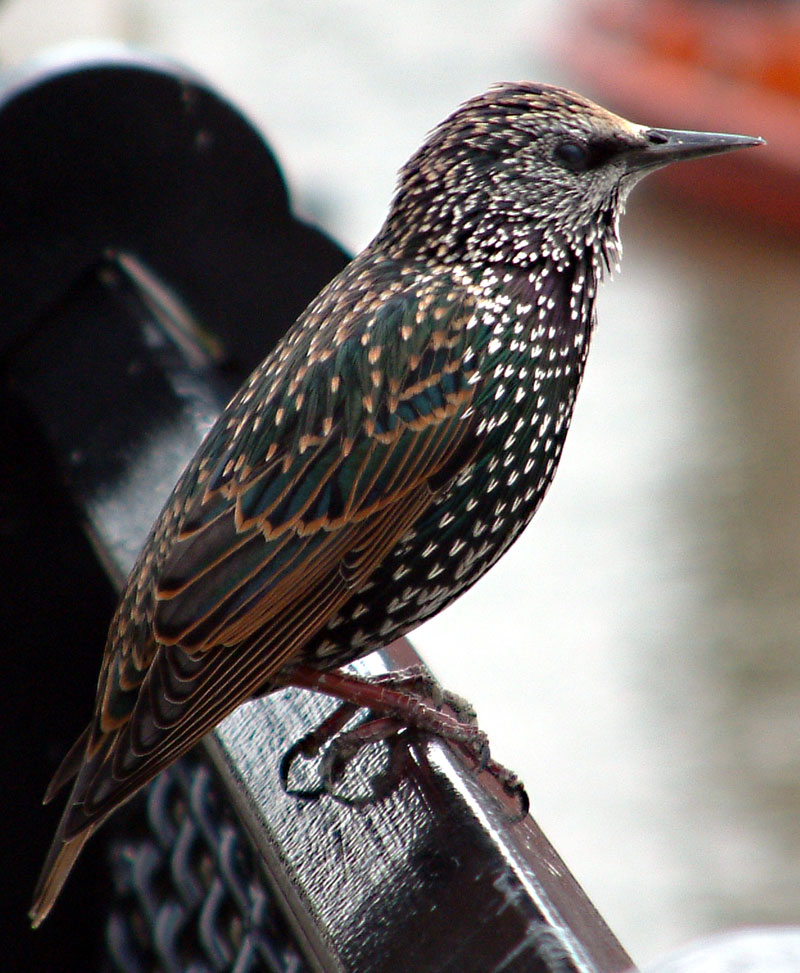 Starlings are small to medium-sized s in the family Sturnidae. The name "Sturnidae" comes from the word for Starling, "sturnus". Starlings occur naturally in the , from , and , to northern and the islands of the tropical . Several European and Asian species have been introduced to these areas as well as , and , where they generally compete for habitat with native birds and are considered to be .

Starlings have strong feet, their flight is strong and direct, and they are very gregarious. Their preferred habitat is fairly open country, and they eat s and . Several species live around human habitation, and are effectively s. Many species search for food by opening the bill after probing it into dense vegetation; this behavior is called "open-bill probing" or is referred to by the German word "zirkeln" (pronounced|ˈtsɪʁkl̩n). Plumage is typically dark with a metallic sheen. Most species nest in holes, laying blue or white eggs.

Many Asian species, particularly the larger ones, are called s, and many African species are known as glossy starlings because of their iridescent plumage.

Starlings have diverse and complex vocalizations, and have been known to imbed sounds from their surroundings into their own calls, including s, and human speech patterns. The birds can recognize particular individuals by their calls, and are currently the subject of research into the evolution of . [ [http://www.nytimes.com/2006/05/02/science/02song.html New York Times, May 2, 2006] ]

The starlings belong to the Muscicapoidea, together with es, s and chats, as well as which are quite distant and (thrashers and mockingbirds). The latter are apparently the Sturnidae's closest living relatives, replace them in the , and have a rather similar but more solitary lifestyle. They are morphologically quite similar too - a partly specimen of a mimid, mislabelled as to suggest an Old World origin, was for many decades believed to represent an extinct starling (see for details).The s are sometimes placed here as a , but the weight of evidence has shifted towards granting them full family status as a more basal member of the Sturnidae-Mimidae group, derived from an early expansion into Africa.

Usually the starlings are considered a family, as is done here. Sibley & Monroe (1990) included the mimids in the family and demoted the starlings to tribe rank, as Sturnini. This treatment was used by Zuccon "et al." (2006). However, the grouping of Sibley & Monroe (besides leaving the subfamily rank vacantVerify source|date=July 2007) is overly coarse due to methodological drawbacks of their technique and most of their proposed revisions of taxonomic rank have not been accepted (see for example ). The all-inclusive Sturnidae grouping is all but noninformative as regards , and obscures the evolutionary distinctness of the three lineages. Establishing a valid name for the consisting of Sibley/Monroe's "pan-Sturnidae" would nonetheless be desirable to contrast them with the other major lineages of Muscicapoidea.

Starlings probably originated in the general area of the , perhaps towards the southwestern , as evidenced by the number of ic lineages to occur there. Expansion into Africa appears to have occurred later, as most forms are found there. An alternative scenario would be African origin for the entire "sturnoid" (as per Zuccon "et al." 2006) group, with the oxpeckers representing an ancient and the mimids arriving in South America. This is contradicted by the North American distribution of the most basal Mimidae.(Cibois & Cracraft 2004, Zuccon "et al." 2006)

As the fossil record is limited to quite Recent forms, the proposed (about 25-20 mya) divergence dates for the "sturnoids" lineages must be considered extremely tentative. Given the overall evidence for origin of most families in the first half of the , it appears to be not too far off the mark however.(Zuccon "et al." 2006)Recent studies (Cibois & Cracraft 2004, Zuccon "et al." 2006) identified two major s of this family, corresponding to the generally drab, often striped, largish "atypical s" and other mainly Asian-Pacific lineages, and the often smaller, sometimes highly ic which are most common in Africa and the Palearctic, usually have metallic coloration, and in a number of species also bright plumage colors on the underside. Inside this latter group, there is a clade consisting of species which, again, are usually not too brightly-colored, and which consists of the "typical" myna-"" assemblage.

Interestingly, the s, a single genus of 3 species of -like birds appear to be highly ic members of the more initial radiation of the Sturnidae (Zuccon "et al." 2006). While this may seem odd ad first glance, their placement has always been contentious. In addition, virtually rules out a close relationship of Philippine creepers and treecreepers, as neither the latter nor their close relatives seem have ever reached the , let alone the . Nonetheless, their inclusion in the Sturnidae is not entirely final and eventually they may remain a separate family.

Genus sequence follows traditional treatments. This is apparently not entirely correct, with "Scissirostrum" closer to "Aplonis" than to "Gracula" for example, and "" among the most advanced genera. Too few taxa have already been studied as regards their relationships however, and thus a change in sequence has to wait.

The review by Lovette & Rubenstein (2008) is the most recent work on the phylogeny of the group. [cite journal|author=Lovette, I., McCleery, B., Talaba, A., & Rubenstein, D.|year=2008|title=A complete species-level molecular phylogeny for the “Eurasian” starlings (Sturnidae: Sturnus, Acridotheres, and allies): Recent diversification in a highly social and dispersive avian group.|journal=Molecular Phylogenetics & Evolution|volume= 47|issue=1|pages=251-260|doi=10.1016/j.ympev.2008.01.020 |url=http://www.dustinrubenstein.com/webpage/PUBLICATIONS_files/MPE2008.pdf]

The starlings are of uncertain relationships. Only one species is known from specimens taken while the bird was still extant; the other remains only known from bones and apparently one early traveller's description. The supposed "Leguat's Starling" ("Necropsar leguati") was eventually determined to be a mislabeled albino specimen of the (""), a mimid.

As the of the Mascarenes is predominantly of n origin though as old as to be highly distinct, it is not clear to which clade these starlings belong - or even if they are indeed starlings, as the Réunion Starling at least was highly aberrant and there have always been lingering doubts about whether they are correctly placed here.
* Genus "" – Réunion Starling (, 1850s)