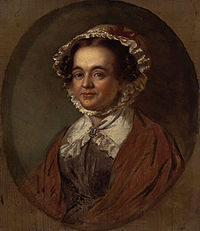 Mary Russell Mitford (16 December 1787 – 10 January 1855), was an English author and dramatist. She was born at Alresford, Hampshire. Her place in English literature is as the author of Our Village. This series of sketches of village scenes and vividly drawn characters was based upon life in Three Mile Cross, a hamlet in the parish of Shinfield, near Reading in Berkshire, where she lived.

Life and relationship with her father

She was the only daughter of Dr George Mitford, or Midford, who spent her mother's fortune in a few years. Then he spent the greater part of £20,000, which in 1797 Mary, then aged ten, drew as a prize in a lottery. The family lived in large properties in Reading and then Grazeley (in Sulhamstead Abbots parish), but, when the money was all gone, they lived on a small remnant of the doctor's lost fortune and the proceeds of his daughter's literary career. He is thought to have inspired Mary with the keen delight in incongruities, the lively sympathy, self-willed vigorous individuality, and the womanly tolerance which inspire so many of her sketches of character. She was devoted to him, refused all holiday invitations because he could not live without her, and worked incessantly for him except when she broke off to read him the sporting newspapers.

Later in life she moved from Three Mile Cross to Swallowfield, where she died on 10 January 1855 after being injured in a road accident. She is buried in the village.

Mitford was an especially prolific and successful writer in a range of genres, from poetry to drama as well as the prose for which she has been best known. Her writing has all the charm of unaffected spontaneous humour, combined with quick wit and literary skill. She met Elizabeth Barrett Browning in 1836, and their acquaintance ripened into a warm friendship. The strain of poverty told on her work, for although her books sold at high prices, her income did not keep pace with her father's extravagances. In 1837, however, she received a civil list pension, and five years later her father died. A subscription was raised to pay his debts, and the surplus increased Mary's income. She eventually moved to a cottage in Swallowfield, where she remained for the rest of her life. She is buried in the churchyard there.

Her youthful ambition had been to be the greatest English poetess, and her first publications were poems in the manner of Samuel Taylor Coleridge and Walter Scott (Miscellaneous Verses, 1810, reviewed by Scott in the Quarterly; Christina, the Maid of the South Seas, a metrical tale based on the first news of discovery of the last surviving mutineer of the H. M. S. Bounty and a generation of British-Tahitian children on Pitcairn Island in 1811; and Blanche part of a projected series of 'Narrative poems on the Female Character,' 1813). Her play Julian was produced at Covent Garden, with William Charles Macready in the title role, in 1823; The Foscari was performed at Covent Garden, with Charles Kemble as the hero, in 1826; Rienzi, 1828, the best of her plays, had a run of thirty-four nights, and Mary's friend, Thomas Noon Talfourd, imagined that its vogue militated against the success of his own play Ion. Charles the First was refused a licence by the Lord Chamberlain, but was played at the Surrey Theatre in 1834.

The prose, to which she was driven by domestic necessities, was the most successful and financially rewarding of her literary productions. The first series of Our Village sketches appeared in book form in 1824 (having first appeared in The Lady's Magazine five years previously),[1] a second in 1826, a third in 1828, a fourth in 1830, a fifth in 1832. They were reprinted several times. Belford Regis, another series of literary sketches in which the neighbourhood and society of Reading were idealised, was published in 1835. Her description of village cricket in Our Village has been called "the first major prose on the game".[1]

Her Recollections of a Literary Life (1852) is a series of causeries about her favourite books. Her talk was said by her friends, Elizabeth Browning and Hengist Horne, to have been even more amusing than her books, and five volumes of her Life and Letters, published in 1870 and 1872, show her to have been a delightful letter-writer. The many collections available of her letters provide especially useful commentary and criticism of her Romantic and Victorian literary contemporaries.

Each year links to its corresponding "[year] in poetry" or "[year] in literature":